An Island In The Sun

An Island In The Sun

Whenever I'm asked if I take Paypal as a form of payment on the internet I always tell them that I rather hate the program to the core and would rather not give Paypal a scent of my money if at all possible. They're often confused by this but when you see where all those nickles and dimes are going, can you really blame me?

Pay Pal founder and early Facebook investor Peter Thiel has given $1.25 million to an initiative to create floating libertarian countries in international waters, according to a profile of the billionaire in Details magazine.

Thiel has been a big backer of the Seasteading Institute, which seeks to build sovereign nations on oil rig-like platforms to occupy waters beyond the reach of law-of-the-sea treaties. The idea is for these countries to start from scratch--free from the laws, regulations, and moral codes of any existing place. Details says the experiment would be "a kind of floating petri dish for implementing policies that libertarians, stymied by indifference at the voting booths, have been unable to advance: no welfare, looser building codes, no minimum wage, and few restrictions on weapons."

"There are quite a lot of people who think it's not possible," Thiel said at a Seasteading Institute Conference in 2009, according to Details. (His first donation was in 2008, for $500,000.) "That's a good thing. We don't need to really worry about those people very much, because since they don't think it's possible they won't take us very seriously. And they will not actually try to stop us until it's too late."
The Seasteading Institute's Patri Friedman says the group plans to launch an office park off the San Francisco coast next year, with the first full-time settlements following seven years later.

Thiel made news earlier this year for putting a portion of his $1.5 billion fortune into an initiative to encourage entrepreneurs to skip college.

Another Silicon Valley titan, Amazon founder Jeff Bezos, announced in June that he would be funding the "Clock of the Long Now." The clock is designed to keep ticking for 10,000 years, and will be built in a mountain in west The Great Shit Wastes.

I'm just not sure I get it anyway. If you want to do whatever you want and not pay taxes, why not just move to the Cayman islands? Because just some random guy building a dinghy in his backyard is more self-sufficient then these people actually are.

But the idea of an island for these super rich libertarians to get away leads to one more question you have to ask yourself. That is if these islands will benefit anyone at all other than human and drug traffickers and "White country club" members. The answer, of course, is no.

According to their manifesto they plan to raise cash by conducting unauthorized medical research. I'm unclear on understanding how they'd acquire food for their island. Open sea fishing is fairly hard. If they go to port to buy stuff, what the fuck would they buy supplies with?

I imagine that the scam artists floating this idea will be the sole beneficiaries of all this. The beauty of this sort of scam is that it lures in people with the promises that are inherently unfulfillable and then when it inevitably fails, they can just shrug and blame the oppression of government parasites or whatever else while keeping the money because refunds are for communism. Which shouldn't surprise anyone who has ever dealt with Paypal's dispute center.

Maybe I shouldn't hate on this. I'm very much in favor of a space for libertarians cemented into the ocean. I just want it to be at the bottom of it. Then again, this is going to be an oil rig-like platform... with quote "looser building codes" yeah... good luck with that.

I got to be honest with you, I didn't actually think that an oil rig could support that many people on it. And to have libertarians on there with a lot of loose regulations just make me see this as a potential death trap. When you think about it, an isolated settlement in the middle of the ocean is def. somewhere you'd want like, a the strictest building codes in the world. You know, so the shit doesn't just fall in the ocean.

I can just imagine them screaming about how regulation will just hold them back. And soon after the secret libertarian ocean base just collapses on itself. 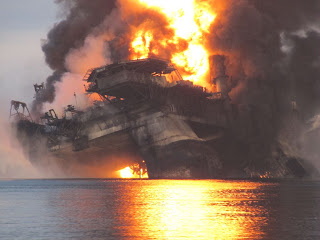 Though that's not in the cards. You know that the funniest ending to all this is what will actually happen: Gullible libertarians get taken in for millions of dollars by scam artists.

I just have to hope that Somalian pirates seize their shit and hold this moron at gunpoint while filming a video of him whining about the whole situation. Till then I just have to hope for my other scenario in that a bunch of communist assault this thing and hurl the libertarians into the sea and liberate the service personnel that are bound to be on this shit hole, and create a floating communist society.