Running For A Cause

Running For A Cause

Cause you want to stay alive is a perfectly reasonable reason to run. In fact, it's built into our systems in the sort of fight or flight instinct. If you don't have it then you are probably dead. Well, maybe not in the modern man. We're such big babies about all of that. But in any event, if you've ever wondered if you could survive a zombie infestation/outbreak, now is the time to put those skills to the test as you go to the Run For Your Life event.

The event is a 5k (3 mile) run from point A to point B with a lot of twist and turns in the middle in terms of paths to go through and zombies to out run. It's all a bit interesting but most of all it'll cost you to run as well as to watch out in the desert area of California. Where it's normally zombie towns the other 364 days out of the year.

Don't get me wrong this whole event sounds like a blast but I have to say I'm on the fence on this one. It sounds like it could be a great time and be lots of fun trying to outrun zombies, but then there's part of me that just wonders about how much fun it can actually be when you have 300-400 people running from a group of zombies.

I bet a lot of people get picked off in the crowds in the first few minutes. Then you have to factor in that the zombies may vary between the classic roamers to the fast moving bastards and you have a situation where it's going to be craaaa-zy.

You die when they take both of the flags that are hanging off your side. Which combines another aspect nerds never had to deal with -Flag football. But the event happens in SoCal on Oct. 20th. Which seems like it's perfect in terms of being right there for Halloween.

Then you have to factor in that the majority of zombie enthusiast are fat lazy nerds who probably couldn't run a mile if a real zombie was actually chasing them. Oh, don't worry, I'm also talking about me in that group. It's those of us who the whole post apocalyptic world of zombies appeals to. 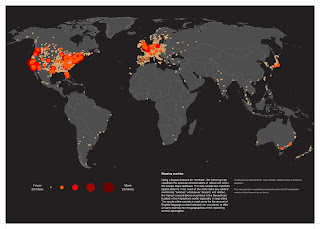 Because really, it seems that the zombie talk isn't spreading as fast as the make believe virus..

The map reveals two important spatial patterns. First, much of the world lacks any content mentioning "zombies" whatsoever. Second, and related, the highest concentrations of zombies in the Geoweb are located in the Anglophone world, especially in large cities.

Oddly enough it also shows how Africa, the place where the word "zombie" originally came from, misses out on any of those criteria and really has no concern about zombies.

The results either provide a rough proxy for the amount of English-language content indexed over our planet, or offer an early warning into the geographies of the impending zombie apocalypse

So as you can see by the fact that there's even a zombie run as well as very little to no concern about zombies in the vast majority of non-first world areas, that this whole zombie scare is really a case of being a first world problem.
Posted by Booster Gold / Javier J. at 5:33 PM