Not to stray from the usual mindless comedy that I seem to scribble about, but I just need to vent this out. It's weighing heavy in both my head and heart causing a sort of sadness. At the same time I can't help but think that I did all I could. That I helped extend the time and quality in someone's life. And that in itself is the only saving grace right now.

My neighborhood is full of stray cats. It seems a common practice for ignorant families around here to get their ill prepared children kittens or puppies when they are small and cute. Soon after they start shredding everything in sight they toss the animal out on the street to fend for themselves. 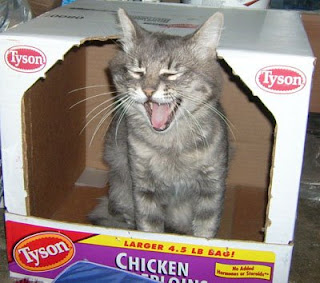 A tired cat? How rare a sight!

Here's where I come in. I first saw Charlie as a starving stray cat afraid of everyone and anything. Hiding under cars and searching for the next meal. He would be seen when night fall came. I decided to put out some food for him under the cars.

To be honest with you, he didn't look like he would survive for long. He looked too far gone in terms of thinness. I took out some Starkist tuna for him and he slowly worked his way closer to me eventually letting me pet him. Every night he'd show up around Six or so. He slowly started becoming a friend of mine. I felt good in feeding him. Allowing him to worry about one less thing.

Named after the mascot of the tuna I shared with him, he started becoming a regular around the parts. Slowly moving from slinking along under the cars to eventually jogging towards me every time he saw me outside, he would start following me everywhere I went on the block. Not just for food. Nah, he would stick around after I fed him or if he wasn't hungry he'd just relax there on the curb with me at night when all was silent.

Eventually I tried to make him an indoor pet. Sure, on a long enough time line the survival rate of anyone drops down to zero, but the difference between an outdoor cat and an indoor cat's lifespan is vast. Pets that live outdoors live on average two years. Indoor pets live twelve to fifteen. So I wanted to try to get him off the streets and into a warm house.

I let him in during the winter months. He would come in the morning hours after a long night on the street and sleep for most of the day. When the night came he'd start becoming stir crazy wanting to get out. He was at home on the streets. I'm guessing he either was never someone's pet or was tossed out at a really young age. So all he knew was a life on the street. I tried my best but eventually the street instinct won out. He chose his path and I couldn't have changed his mind. It's true what they say. You can't make a stray a house cat.

He was thankful for the food and I allowed him to relax indoors if he wanted to, but during the summer months he stopped wanting to come in at all. He'd eat his food and hang around outside. Never straying too far. It was his turf and he was going to be there. When I went out to take out the trash he would come with me side by side just looking up. If I walked up the block he would pop out and join me by my side. 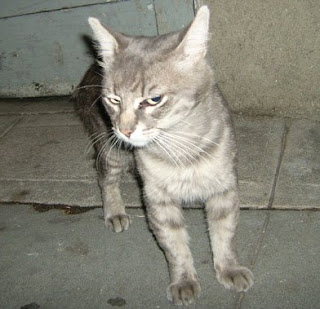 He wasn't too keen on the flash

It was a good friendship and you could tell that he appreciated all that I did for him. It was the least I could do in leaving a bowl of food and water on the side.

The last few days have been the standard norm. I put out food for him, he would hang around. Last night he followed me to take out the trash and I picked him up and got some dry brush off his fur and he went on to spraying some cars. I petted him some and then went inside. He wanted nothing to do with being inside. I figured he wanted some place warm during the winter but didn't want to rest while the summer months were in full swing.

Today I found him dead on the side walk from what was clearly a dog attack. Which confused me because there's many places he could have run to. He's nervous about anyone else that isn't me. So it must have come as a surprise. At least that's what I'm telling myself to find some comfort that he didn't suffer. It hit me hard. Really hard.

Once again I found myself digging a grave for a stray. I refuse to put an animal in the trash. It was his turf and so he'll be buried there, I said to myself. I've done this before for a different stray that decided home was my parents house and my mother unofficially adopted him. But with Charlie I felt awful. 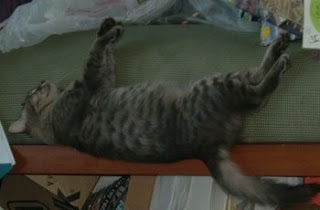 Must have been a lazy Monday

I didn't see him at all during the night hours I would normally. I put food out and when checked, it was eaten. But I hadn't seen him till I saw the body. During the night I heard a dog bark, but I don't know where that falls into it.

Part of me is wondering if only I checked out there earlier or if only I went out to see what was that bark about. But that part of me is stupid. I couldn't have done anything for him by the time I got out there. The way he was after the attack, I didn't hear him.. and he had a very loud voice when it comes to fighting, so if he was caught off guard, there's nothing I could have done to save him after the attack.

I toss that way of thinking aside and focus on the positive. He was cared for and he had company. I don't doubt for one minute that if I hadn't fed him two years back, he would have been dead shortly after. I find comfort with that. You can't stop death from happening, but you can change the quality of life for them with the time they have.

I'll miss the company walking by my side to the trash can as if he was my side kick. But he lived a life longer than what he would have otherwise and he did it with a human that he considered his friend or pseudo owner. 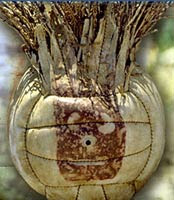 I thought of Castaways supporting cast member
as somewhat relating to this friendship.

In that extra year and half/two year time he knocked up another female stray that came around the parts. I took her in and she had the kittens. Which along side her were given good homes. One of which looked exactly like him. After that the spaying/neutering was a must. I was lucky to find homes for all those kittens, but the idea that he was out there creating more strays bothered me. There was enough strays out there. No animal should have to live life like that. It's no life for anyone or thing

Both his quality and quantity of life went up because of me and that's where I'm feeling like I made some change. That while it's tragic that he's not here anymore, that I gave him an extension to life and he was always happy to see me. So that extra time was spent happily. His choice was to be a free cat. Along with that lifestyle comes the dangers of being outside. While many other cats would have chose a life indoors, your heart was set on being free but being friendly.

I knew that one day he'd die because of the higher risk living outside, but it's a hard pill to swallow. I'll miss the little guy. But this does bring up a current news piece I want to put some attention on.

On October 1st it'll become law that your pets after four months of age need to be spayed or neutered. It's been on the books for a while as you can read from the LA TIMES and finally coming to pass. I couldn't agree more with this action. Unless you're some breeder with pure bred animals, which 99% of pet owners aren't, there is no reason why your pet should be able to reproduce. It'll only inflate an already large animal population, but if you really want another pet, adopt one. Shelters are over flowing with good pets that long for a home and a loving owner.

Not to mention the amount of animals put out on the street because they were knocked up or the puppy/kitten stopped being cute or was born to an owner who just doesn't care. It only leads to hardship for the animal. Not to sound like Bob Barker here but I beg that you spay or neuter your animals. If you notice strays around your area look into local Catch and Release programs. They'll capture the strays, spay/neuter them and bring them back to their neighborhood if they can't find a home to adopt them. All these options are better than having strays out there living their life scavenging for food. There's really no reason not to with the amount of financial aid they help you with if you're worried about the cost.

So to you, Charlie. I raise my glass of single barrel Jack Daniels and have a drink remembering our time together. You knew you were loved and your company was always welcomed. It'll be strange and sad around here without you out there.
Posted by Booster Gold / Javier J. at 4:49 AM