I've always been counter Internet culture. If a large number of people find something entertaining, interesting or funny, chances are I've mocked it, hated it or probably ridiculed it for no reason other than the fact that I'm an insecure twenty-somethings who didn't do too well in school, didn't fit in with the other kids, and has little prospects for a future that doesn't involve spending long nights spamming my resumes to various temp agencies desperately hoping something will stick. Or maybe I'm just projecting.

But hey, usually my hate for things on the Internet is focused on others and not on myself, unless I can convince myself that I was there at the start of the fad. Then it's awesome, like Pokey the Penguin.

Check out this awesome Flash game!

I've seen things, things you wouldn't believe. I was there at the start of All Your Base, the highs of It's a Trap, the lows of and lows of Goatse.cx. I witnessed lemon party long before it become some 30 rock joke. Who else besides Dave Chappelle flips out over catchphrases like I do? I'm so full of hate I hate being on the ground floor of the internet's greatest successes!

I've scoffed at other web sites that have chosen to not to act like massive dicks to everyone they come into contact with. What do they have to show for it besides millions of dollars? Not resentment and jealousy, two traits that have made America what it is today, that's for sure.

That's why, when I consider my long history of acting like an inhuman monster, it disturbs me when I realize that I'm starting to well... like things.

What happened to me? It seems like only yesterday I was bashing myspace, mirror pictures and blogs in general as anything other than a spawn of live journal and the emo invasion. I would never take advice from strangers on the internet as to where to eat like I do now on Yelp. No way would I be saying catch phrases like Zerg Rush or Haxor the Gibson. I'm getting sloppy in my old age.

It ends up that the phrase "you become what you hate" is true. It was only natural to happen. A sort of Stockholm syndrome that effects those with Asperger syndrome first and then eventually works it way to the normal folks on the internet. Surrounded by this online culture whenever I come on to check my spam filled mail box, it was only a matter of time before the hater became the hated.

It's time to band together and re-join the collective internet social hive mind. Here's what I forgot to hate.

Why you love it now: In 2002 the founder of Newgrounds founded a video game development company called The Behemoth that would be tasked with porting some of its more popular Flash games to consoles. Yeah, really. 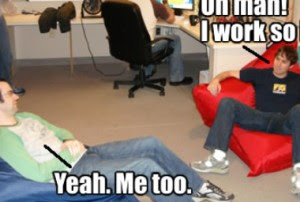 MAYBE IF YOU FUCKERS DIDN'T LOUNGE AROUND SO MUCH I COULD BE PLAYING MULTIPLAYER IN YOUR SHITTY GAME RIGHT NOW. Uh, I mean, that's what I would say if I had purchased your game. Heh...

The Behemoth enjoyed success with its first foray into the wonderful world of console ports, Alien Hominid, which was basically a rip off of Metal Slug. However, instead of playing Metal Slug people somehow felt compelled to buy it for the Gamecube and again on the Xbox 360. Unfortunately, most of Newground's audience was still in diapers when Metal Slug was released and might possibly still be.

With The Behemoth's latest release titled Castle Crashers, users are finding themselves digging deep in order to purchase some Microsoft fun bucks for the privilege of downloading what basically amounts to Turtles in Time but with some RPG elements tacked on. Sorry, but I didn't play Turtles as a kid and lament that I couldn't level up Donatello. Everything old is new again with RPG elements! Any jerkoff will buy your game as long as you can level up. Ding! Now that this is aired out, can we put an end to all this leveling up? I went outside and killed some grass hoppers and gained no life experience. It just doesn't work this way Video game companies.

Because The Behemoth is billed as an indie company it makes them somehow less evil than the likes of EA. Sorry, but I just can't support things like Q&A, online multiplayer working out of the box, and saved games not suddenly disappearing for no reason. I heard Larry Probst personally raped every single underpaid programmer at EA. It's enough to make an anonymous housewife stick up for her pussy husband on LiveJournal.

What you forgot to hate: Newgrounds is the clearinghouse for every crappy flash animation featuring Sonic fighting Goku or Mario and Mario shits his pants for some reason, made by guys who just finished downloading Adobe Flash CS3 Professional. That Newgrounds doesn't at least owe part of its fortune to The Pirate Bay would be hard to believe.

The clientele is every loser who wore a Slipknot shirt in junior high school and quotes Borat in college. Newground's success in the world of console games should only infuriate you more.

Why you love it now: Score another one for the "indie game developers can do no wrong" crowd, though I never imagined in a million years that a couple of guys would be able to finance a series of games off a damn web comic. If I weren't so full of irrational hatred I'd be pretty damn impressed. 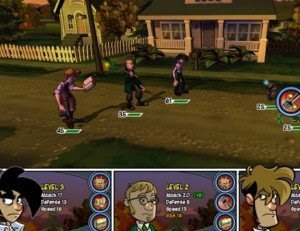 Penny Arcade is making a game? Well that sounds kind of dum- YOU MEAN IT'S AN RPG?! Count me the hell in!
Expecting a backlash against the gruesome twosome's video game debut I was shocked to find that Penny Arcade's game was, gasp, well-received by the general masses.

And then I realized it has RPG elements. Well there you go.

What you forgot to hate: The fact that these guys achieved an incredible amount of success and your comic about dudes with 'tudes who play video games and are occasionally reprimanded by a stereotypical female character who is always complaining about her period and the hands are never in proportion to the rest of the characters' bodies never got off the ground.

Most of all, have you've seen these guys in person? Not at all like their comic self. Harvey Pekar may look like he's the poster boy for NPR and This American Life, but at least American Splendor is true to the characters. I bet I say something mean about the two I can get a feud going between them. Wouldn't that be exciting?

Can you imagine what the Internet would be like without petty feuds? It'd be a place to communicate with people who are different than you. It'd be a place to learn new things, enrich your life and the lives of others, and help make the world a better place. An Internet without drama and the web sites devoted to cataloging that drama? I can't imagine such an Internet.

Then there's the factor that they unleashed hell in the form of the now situational web comic typecast roles. You need two human characters. Just change out the hair and cloths so you can recycle the face. Toss in a random animal or object that can talk. With all that you have yourself your very own comedy web comic.

So when a couple of otherwise okay guys attempt to make a couple of bucks through a collaborative vision, hard work and determination, just say no. We don't tolerate that sort of bullshit around here.

Why you love it now: I signed up on Twitter. The Horror...The Horror

What you forgot to hate: Just because you submit yourself to the glorious hive mind mentality of constantly maintaining communication doesn't mean you have to sign up to everything. Jesus.

Anyway, Twitter continues to become more popular than anything in the free world as days go by. The site allows users to send and receive text messages from friends and family about any old thing. It isn't exactly new technology but it's the ease at which messages can be sent and received.

Well what do you know, access to a seemingly endless supply of images of breasts does get boring.
From your profile you can type in a short message about what you're currently up to. Those who "follow" you receive the message on their phone. Conversely, you may receive a message like, "Just got out of the shower, soaking wet, looking to get fucked tonight -Mom".

With the ability to send and receive messages to and from your friends about every little thing you are doing, it only leads me to one question, WHAT THE FUCK DO YOU ACTUALLY TALK ABOUT WHEN YOU MEET UP WITH THOSE PEOPLE?

"Oh hey! I was just at the store and you won't believe who I saw!"

One of the benefits of leaving the house to go do something is being able to come back and tell someone everything you did. Usually that person doesn't care, so why would they want to sign up to receive real-time status reports about you? And yet they do.

It appears that communication is an activity that's best avoided unless it can be done in bite-sized nuggets and as inane as possible. Twitter makes it easy to transmit any superfluous thought you may have such as "Do you think John Ritter is boring God in heaven right now?", otherwise these thoughts would just stay in your head. And who would want that?

Why you love it now: You're reading this on one now.

What you forgot to hate: Because you're reading this on one now.

Even worse is that it's not limited to your Goth teenagers anymore. Pets can actually jump in on the social networking on sites like Catster /Dogster. It's important that your pets have a social life. Then maybe they'll stop bugging me to take them for a walk or scratch their butt as they can get one of their pet friends to do that for them.

Are you back with me now? I thought I lost you there for a while. Now that I write all this out and get it in the open, perhaps I'll sufficiently retrained in the art of hating everything I hate (well, the four examples I could think of anyway), the healing process can begin.

I recommend making slanderous claims about web comic authors you don't think are funny, not accepting friend request from spam, bands or anyone else for that matter on myspace. I've always hated those people! How dare they try to be my friend!

Oh, joy! It's like I never stopped hating these things.