Hey stoner, if you're just waking up... well then why don't you have a bong in your hand? Wake and bake, brah! Second - I bet you're wondering if pot is now legal and you can light a fat one up in front of a cop without any problem.

Let's ask the internet - Is Weed Legal Yet DOT COM? The results are in, continue killing yourselves with alcohol and pills! 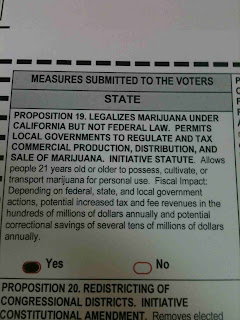 The problem with that theory is that young people don't vote. Not any. They don't give a fuck. Then old people are long past those days and have a fuck you, got mine attitude. So of course they're not going to want to share that shit with you. You're the people they told to get off their lawn!

A lot of folks see this defeat of Prop 19 as proof that the war on drugs isn't as wasteful as many think it is. Hell, this whole election is full of this shit. The few republicans I socialize on a daily basis were celebrating like crazy because they felt this victory for the republicans showed that the republican party was popular again. 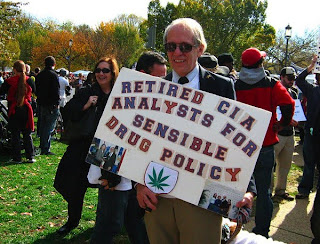 Even if you were shouting 420 - Vote weed every day, you weren't enough to get a majority to pass the vaguely written bill. So sad. Then again, if you supported California's weed law and not Arizona's anti-mexican law, you were kind of a hypocrite since both were all about usurping federal authority.

One is interstate/intrastate commerce and shouldn't necessarily be subject to federal regulation, and the other is immigration which is inherently part of the federal government's purview.

Though I support American small business owners and American farmers, so I suppose I support prop 19.... Then again American farmers were against it. I guess it's pretty clear why - It would be like Al Capone campaigning to get rid of prohibition. Then where does he make his money?

Such a silly image. Why would a weed smoke weed? That makes no sense at all!

The more atrocious crime that happened on election night was that Californians passed prop 26 and the whole way we find ways to balance our budget. Besides, what was the real hidden thing behind Prop 19 that no one really picked up on.

What were you actually voting for in Prop 19? A yes vote would create legal weed and it's not like we need more money in the hands of North American capitalist in a new industry of corporation fueled with marijuana. 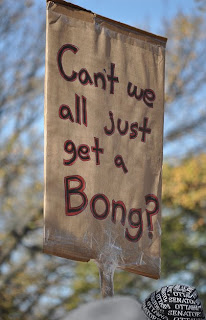 Then again, corporate control of weed is probably a whole lot better than 200k people going to jail each year. Let alone the ecological impact that importing drugs from Mexican seems to be having on the environment.

Just check out how a suburb of Sacramento is going to tax the shit out of medical marijuana.


City voters Tuesday night passed the measure to impose taxes of up to $600 to $900 per square foot on personal marijuana cultivation. The tax means that a medical marijuana user who grows weed in a five-foot by five-foot indoor space could be required to pay an annual local levy of $15,000.

Ha ha ha ha. Just imagine if this was legalized. Sure they would get tax revenue from weed but holy fuck, would they have ran everyone out of business due to how much they would have to pay in taxes.

Did you know that each year our southern border is overrun by HUNDREDS of MILLIONS of Monarch Butterflies? And yet we hear NOT A WORD about this attack on our sovereignty from the mainstream media. What is it that Obama doesn't want us to know? 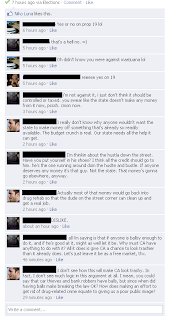 Though it will be comical when we do legalize and tax the shit out of it and revenue still doesn't go towards anything meaningful and social services continue to be slashed.. then we'll be looking towards legalization of other things. Prop 69 - Legalize prostitution.

Or at the very least legalize the ability to get your Growler filled at any brewery without having to have the brewery logo on the bottom. What a stupid law. California sure does have some stupid ass laws. Maybe they should make it legal so that if you live in California, the government should just give out free ounces of weed to compensate for the shitty governing they provide.

In the end, legalizing weed really isn't the thing that we should be focused on. It's as short sighted as the war on drugs itself. What we should be reaching for is a way to create societal changes that would destroy socioeconomic oppression in all forms so that fewer people are compelled to self-medicate as a means to escape the vast depressing nature that is reality.

But then I guess your childish desire to get high as fuck trumps the needs of the poor and working class to escape the levels of torture in sweat shops and burning fields picking grapes so that your daily life can have all the high class needs you desire.
Posted by Booster Gold / Javier J. at 8:06 AM