So.. this is an odd story, but apparently The Incredible Hulk doesn't like Mexicans.

Maricopa County Sheriff Joe Arpaio said Ferrigno, 59, a body builder who donned green makeup to star in the popular 1970s television series 'The Incredible Hulk,' was among 56 people sworn in as volunteers for an armed immigration posse.

Arpaio said the posse would work with sheriff's deputies in operations targeting smugglers and businesses suspected of employing illegal immigrants in the county, among other duties.

Arizona passed a tough law earlier this year requiring police to determine the immigration status of people they suspected were in the country illegally. Key parts were stayed by a U.S. federal judge before it came into effect in late July.

You would think that after being misunderstood as a monster by the greater public, he would at least be able to relate to the plight of the brown man. Nope, not at all, the Green Monster is all full of rage against Mexicans trying to cross our boarders.

Let's just hope this doesn't give Jeph Loeb the idea to add Brown Hulk into the Hulk family next to Red Hulk. 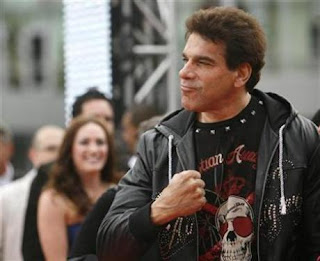 Though you better watch out. I know for a fact that as soon as he solves this whole Mexican problem, he's just going to hit the highway and hitchhike on outta town to the next city. In some ways, I would say that such a roaming nomad is worse than an illegal immigrant. At least they want to set up house where ever they land.

I do have to wonder what a has been semi-retard can do to stop them crazy illegals from crossing the boarder? I mean, let's be real, was there a comic/sci-fi convention in Arizona and Lou had an extra hour to kill?

This is a dude who I have never seen turn down the chance to do a convention and potentially make $10 from each fool who has the nostalgic sense to buy from his table in the C-list celebrity area. I also have to say that he's a bit of a douche. So perhaps I shouldn't be too surprise by this move to join the Arizona Posse.

So I guess you wouldn't like Hulk when he's finding illegals in town. And all that nonsense. Let's face it, it must have been a slow news day and they wanted to link it back to the highlight that ABC is developing a brand new Hulk television series. Besides that, any news piece where a celeb, even a z-lister like Lou talks bad about immigrants will always get attention.
Posted by Booster Gold / Javier J. at 4:28 AM