That's right. They're not by any means new. It's all the old tax cuts. Remember all that talk about Change and Hope. The kind that you could believe in? Yeah.... about that, don't expect it anytime soon cause Obama extends Bush Tax Cuts.

WASHINGTON -- President Barack Obama's top adviser suggested to The Huffington Post late Wednesday that the administration is ready to accept an across-the-board, temporary continuation of steep Bush-era tax cuts, including those for the wealthiest taxpayers.

That appears to be the only way, said David Axelrod, that middle-class taxpayers can keep their tax cuts, given the legislative and political realities facing Obama in the aftermath of last week's electoral defeat.

Gee, I'm sure glad you folks decided to vote against the incumbents to get new blood in there. Cause they're sure on the right track to getting our shit together. Though I guess this isn't coming as much of a shock. I think I figured out the quote for the DNC to use on their banners.

"If we think we're going to lose, why bother fighting?"
-The DNC's Call to Arms

Boy Howdy, am I glad I voted for Obama. He's everything I thought he would be! Bring on that hope and change... 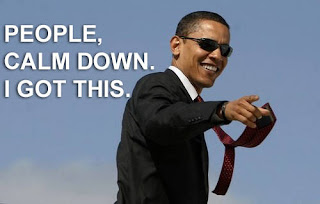 This is pretty sad for the sole reason that this was probably all I had hope for left with him. But I guess I should have known better and just given up on Hope long ago. If there was any justice in the world, or at the very least any clear cut backing on others words about trying to reach a compromise, it's just tossed out.

An actual compromise would have been to keep in place the middle class tax cuts while letting the wealthy tax cuts expire at the end of next year. But nope, that shit isn't happening and our nation will be in a state of stasis for the next two years. Then in four years we can cut them again. It's a pretty vicious cycle. Obama's idea of compromise is to just give into any of the republicans demands on whatever they want. Grow some balls, man.

The whole appeal of Obama was that he wouldn't be as bad as Clinton. But he's so much worse as of now. In spite of all the neo-liberal reforms Clinton enacted, he at least had some form of commitment to mildly progressive taxation whereas Obama obviously doesn't give a fuck about any of that.

And if you thought this allowing the tax cuts to expire was a long shot, just wait till we get to the estate tax. That shit is dead in the water. Just look at the potential for the federal estate tax...

Q: In reading about what will happen to the Bush tax cuts in 2011, the federal estate tax is never mentioned, in my experience. Why so, and what should we expect?
—N.M., Santa Cruz, Calif.

A: The strange saga of the federal estate tax, dubbed the "death tax" by its foes, has drawn growing attention lately. Nobody knows what will happen -- even though the midterm elections now are history. But there is a chance that Congress finally will take action in coming weeks when lawmakers return for a lame-duck session.

Naturally, you can't rule out the possibility that Congress will do nothing. Gridlock seems like Washington's natural state these days. But there is a compelling reason to expect some action: If Congress does nothing, the nation will face a bizarre set of circumstances.

This year, the federal estate tax is zero. If Congress takes no action, the tax will return on Jan. 1, 2011, with a basic exemption of $1 million and a top rate on the largest estates of 55%. Most lawmakers have indicated they don't want this to happen.

That would ensnare far more people than the estate tax did in 2009, when the basic exemption was $3.5 million with a top rate of 45%. (Transfers from one spouse to another typically were tax-free, however.) Furthermore, it would be odd to have a system with a zero estate tax this year followed by a very high estate tax next year.

"The most likely option for a lame-duck session compromise seems to be restoration of the 2009 rules," says Tim Hanford, a consultant in Bethesda, Md., and a former tax staffer on the House Ways and Means Committee. "However, many members of Congress would like to provide even more estate-tax relief."

So basically the best tax, the one made excuslively for dead rich people, is going to be gutted or completely reworked within the next two years. No way will the rich in power allow for this shit. I mean, why would you let the US collect $14.8 billion from the elite for simply dying and passing on their mega bucks to the next elite family name? So you know that those effected aren't going to stand for a $15 billion dollar taxation on such a limited population

An easy route for this anger against it would be to simply call it a "Death Tax". It seems like putting Death in front of things works. Death Panels. But this tactic will surely gather the red state true patriots to gather around in their tea parties and proclaim that while the only two certainties in life are death and taxes, they shouldn't be combined.

Not like they'll have a tough competition for this. Who the hell is going to defend the estate taxes publicly? One, it's viewed as taking from your recently departed loved one. But it also creates a stupid mess of confusion between states who the relative may have lived in or kept money in.

Take Bank of America. What if they kept your assets in bank crossing state lines, will the state that it's in keep the taxes or will the place where the dead guy be it? What will be the tax rate for them? It's bad enough that the secret life goal of Americans is to discover that they had a rich estranged uncle money bags who just wanted to give them his vast fortunate they never knew about. So they won't dare even consider the possibility of taxing this mythical golden goose.

But then you have to factor that death taxes may not make a whole lot of sense. Everything the person earns is already taxed when they're alive. So you're going to tax it again when they die? Why should kids be punished for their parents success? Then again, any rich fucker worth their weight in expensive sea salt probably already set up some living trust to spirit the money away to the heirs.

As much as they want to support their troops, most of Americans don't want their inheritance to go towards funding a bunch of murderous tyrants. I guess the only good reason to oppose this would be to actually starve our hungry War State. 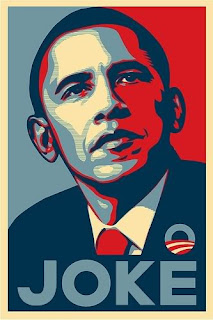 Just think, in a good 10 years time, each and every state is going to have no money and no infrastructure. The entirety of the next decade or two looks like it's going to be awful. I just wonder how Fox News will spin this whole story about Obama giving up on the fight against Bush era tax cuts.

It seems to be the mantra of every American to suggest that we should raise the taxes of everyone else but themselves. We can't get very far on that mindset. Especially not in California where it's far easier to pass something to spend money than it is to actually allow ourselves the ability to collect that money for the proposed item.

It leads one to think about how California has to already borrow a lot to meet its unemployment obligations and maybe things would get bad enough to bring people out of their holes and call a state constitutional convention. But that isn't going to happen either.

Even if it did happen, there's nothing that can happen in the US political circle anymore without being co-opted to benefit the rich in some way or another. We literally have sold our nation to the captains of enterprise. Capitalism has worked in making some rich off the back breaking work and sweat of those below them.

Looking at the Dailykos and Huffpost, you'd think that the democrats finally cracked. The Huffpost is tearing into Obama pretty badly over this and all the Obama supporters are so desperate that they're criticizing huffington post as being "anti-Obama". Really? REALLY?

There's a lot worse shit Obama has done, as you can see in this counter to that Democratic sponsored praise for what Obama has done.. highlighting what exactly he's done that isn't too nice. So yeah, this is far from the worst thing Obama has done but it may be the final straw to many.

I don't mean to sound crazy, but it would really not surprise me if both parties are so filled with so much separation that we get a 2012 election that has actual viable third and fourth party votes.... Okay, who the fuck am I kidding, that shit wont ever happen. But at least I'm throwing it out there.

Okay, that shit is for sure never happening. At best this just means that we'll have the lowest voter turnout ever.

What else can you expect when you follow up a "YES WE CAN!" chant with the act of squandering the democratic majority and doing almost nothing to fix anything slightly before the republicans take back the house. You're just saying that it didn't work out like you hyped everyone up for and you want to get placed back into office? Yeah.. probably not the best idea.

You might as well make the tax rate over 250k just 0%. No one cares about a ship that sinks slowly, but everyone remembers a ship that hits an ice berg and cracks in half as it sinks. Even if a slowly sinking ship allows for the running around of passengers while giving the rich people enough time to get into the life rafts with all their belongings.

When it comes down to it, it's hard to get behind a tax cut and I really don't want to give my money to a government that steadily cuts every form of social spending and welfare while increasing taxes to those who can not afford them to begin with.
Posted by Booster Gold / Javier J. at 6:36 PM