Getting Graphic: Bush Vs. Obama

Getting Graphic: Bush Vs. Obama

Yay! Obama's president and all is well. I mean, we don't get a complete moron at the helm ready to press the button if needed.. Speaking of which, that's always a stupid phrase. What if he did press the button one day. How much shit would that cause him to answer. He can't simply just press a button. He can have the final say on it, but if there's anything you can take away from this health care debate it's that the president can't get anything by simply willing it.

Take for example the idea that Capitalism is alive and well. The stock market hasn't been the best. Though, from the next bar graphic you'll see that it's doing a lot better, right? I mean, let's all take a good hard look at these graphs and praise ouor new president for the hard work he has done. Even if it's going strong under a milquetoast right wing socialist antichrist, right republicans? 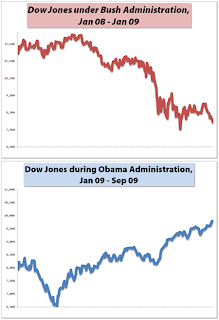 Holy shit, will you look at that. The DJIA is up, I mus tnot be poor anymore! Salvation is here, right? Then again, those are awful graphs. They are on different x and y scales. So for anyone who is wondering what they'd look like on the same graph

Yess!! Rise from your grave capitalism and prosper so that we, the civilized, can banish your remnants beyond the Atlantic, away from our lands!

If you notice, the highest point is under the Bush administration and the lowest is under Obama's. I'm not sure I'd be all that proud of that, right. I mean, Republicans can use this to suggest that one was the better president here.

It's also silly because it cheery picks a particular period from the Bush administration in order to decieve. That and of course it reinforces the completely wrong notion that the presidency drives the stock market. The stock markets are not measures of national prosperity.

In fact, the stock market is not a measure of anything really useful outside of what stocks YOU currently own. Given the fact that most Americans don't know what their 401k is invested in, you're really better off ignoring they even exist.

It's like using casino numbers to extract meaning from current events. The only people who do it are cable news, old people and idiots. You don't want to be one of those, right? So the next time someone shows you how the stock market is doing under Obama's control, just remind them that they're complete and utter tools.
Posted by Booster Gold / Javier J. at 9:04 AM