A Much Delayed Conversation About The Nobel Peace Prize

A Much Delayed Conversation About The Nobel Peace Prize

When I first heard about Obama getting the Nobel Peace prize I was in the car listening to NPR. If I had seen it online I'm sure I would have thought it to be a joke. Even though I voted for the guy, it did seem very far fetched for him to win it. Oh, I knew he was going to get it eventually, but perhaps not in his first year. How long did it take? Hell, how long did it take Martin Scorsese to get an Oscar? And he got it for a shitty remake. I was expecting something like that to be the case for Obama and the Nobel.

As it stands, it seems that the Prize has fallen to the level of Time's person of the year. Maybe this will stop him from invading iran.. haha ha ha ha. Yeah, more than likely not. Especially since on the same day of getting the prize, he deployed more troops to Afghanistan. That's got to be comedic timing at its finest. 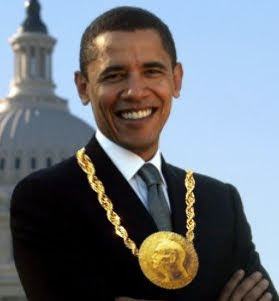 The whole situation is a little funny since it was only a few weeks ago that the world showed us they didn't like Obama after it decided to personally shit on his head and not give Chicago Olympics. I'm opposed to the wacky sports events, but Obama went there to fight for them. They made such a big deal about it. How they were putting him in his place. That'll show him!

So what was the rational to giving the peace prize to someone who is dropping bombs as we speak? Let's hear their rational:

"Only very rarely has a person to the same extent as Obama captured the world's attention and given its people hope for a better future," the Norwegian committee said as the prize was announced.

"His diplomacy is founded in the concept that those who are to lead the world must do so on the basis of values and attitudes that are shared by the majority of the world's population."

So the Nobel prize committee looked into their crystal ball, and shuddered at the terror that McCain/Palin would have caused. Especially telling since when they would have voted for this prize would be roughly two weeks after he first went into office. They literally gave him the prize for not being Bush. Then again, this is the only way that he would ever visit Norway, so maybe the committee just wanted some autographs and a photo op with the man.

If you really want to get morbid, they also gave MLK the award rather early in his career as well. They felt that they missed the boat with Ghandi because he got himself shot and they didn't want to repeat that again and rushed to give Martin Luther King a Nobel prize. One would venture to say that they're afraid that Obama will end up taking a bullet also. 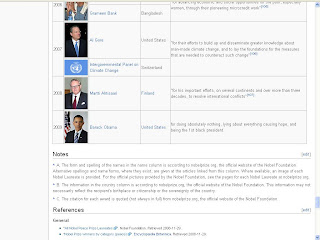 Now we should ask the real important question. What should he do with the 1.4 million dollars? Please don't say "Use it to bail out the banks". Oh what the hell, we know what will happen to that money anyway. With the world watching he'll do nothing but give it to charity. I'm sure he could of injected it into America's debt. But hey, that would be ripped apart by the far right no matter what he did.

So did the Nobel Peace Prize go to the wrong person? Maybe. The Nobel Peace Prize is intended for the person who "during the preceding year shall have done the most or the best work for fraternity between nations, for the abolition or reduction of standing armies and for the holding and promotion of peace congresses.

But often, much like how the Oscars typically get it wrong, you can't assume that their voice is always correct. So second-guessing Norway for their choice on who exemplifies these traits is something you should do. After all, the Nobel committee has done mistakes in the past, let's take a look at previous faults.

Gave some nice speeches, won an election, and has otherwise been cooling her heels in jail for the last 20 years. In other words, she's done even less to get the prize than Obama.

A proud symbol of the theocratic feudal system that ran Tibet into the ground, yet for some reason he remains popular with Western new-agers.

Wrote some books and "spoke out against violence, repression, and racism." Yeah, great. Him and how many other people?

An oddly sadistic, but generally unremarkable nun who got swept up in a huge marketing campaign not of her making. Up to that point she hadn't done anything for international fraternity, aside from expanding her incompetently-managed network of deathbeds. Hadn't organized a peace conference or campaigned for arms reduction either. Never tried to correct the mythology that grew up around her. Often used as a PR pawn by rich bastards to pretend that they cared about the poor.

Also there is a common misconception that she provided hospice care in her Houses for the Dying. A report came out in the early nineties that basically said that there was no substantial palliative care going on and that the nuns who worked in the Houses for the Dying encouraged all patients, including those who were curable, to just lay down and die.

The prize pissed off a lot of white supremacists, which shows that it wasn't all bad, but up to that point King really hadn't done much in international affairs. He didn't start talking about the Vietnam war until the following year.

Originally made his name by denouncing the feeble puppet regime in South Vietnam. Once he was in the government, he did everything he could to rein in his batshit insane boss who thought that nuking Hanoi was a pretty cool idea. Ended up holding Nixon to a campaign promise of peace that he probably never intended to keep. Struck a fatal blow against Bircher/McCarthyist domination of US policy by opening relations with China. Single handedly stopped mass genocide of Southeast Asians by ceasing his personal Southeast Asian genocide campaign.


There you have it. The final word on this matter. Obama.. way too soon. Not unless you can repeat on that award. You can't win it again, can you? Then again, it was a stupid prize started by a man riddled with guilt that he created dynamite, a tool used to kill countless people. So who gives a fuck who they give it to.

Ok, I'll address the detractors who will call me out on this clearly parody blog entry and take it seriously for some unknown reason. But let's get real here and get to your complaints before they're issued.

I dislike Mother Teresa, not because I'm a monster, simply because I'm not ignorant. Her life was a lie. She funneled millions into the church that the donors thought was going to charity. How much of those millions went to defend or relocate pedophile priest? She gave dictators legitimacy and she ruined countless lives. Hey, nobodies perfect (except Jesus)

What have I've done with my life? You ask. Well, I certainly haven't left people die in their bed and encourage otherwise treatable cases to just die. But maybe.. Just maybe I will do something with my life. Maybe I'll bring about some change. Perhaps that potential could get me the Nobel Peace Prize as well. Maybe even sainthood.
Posted by Booster Gold / Javier J. at 6:16 PM