Protect The Sanctity Of Jews

Protect The Sanctity Of Jews: Vote No On Interracial Couples In Israel

See, I told you this would happen. I told you that if you allowed those religious gay bashers to get their way, they would open the flood gates on what they want to allow and not allow happen with marriage. But you didn't listen to me and now here we are left with this.. this sort of action where religion has stepped far beyond the line and went ahead did it.

Now the religious crazies want to ban Jews and Non-Jews from getting together.

NAZARETH // A local authority in Israel has announced that it is establishing a special team of youth counsellors and psychologists whose job it will be to identify young Jewish women who are dating Arab men and “rescue” them.

The move by the municipality of Petah Tikva, a city close to Tel Aviv, is the latest in a series of separate – and little discussed – initiatives from official bodies, rabbis, private organisations and groups of Israeli residents to try to prevent interracial dating and marriage.

In a related development, the Israeli media reported this month that residents of Pisgat Zeev, a large Jewish settlement in the midst of Palestinian neighbourhoods in East Jerusalem, had formed a vigilante-style patrol to stop Arab men from mixing with local Jewish girls.

Hostility to intimate relationships developing across Israel’s ethnic divide is shared by many Israeli Jews, who regard such behaviour as a threat to the state’s Jewishness. One of the few polls on the subject, in 2007, found that more than half of Israeli Jews believed intermarriage should be equated with “national treason”.

Since the state’s founding in 1948, analysts have noted, a series of legal and administrative measures have been taken by Israel to limit the possibilities of close links developing between Jewish and Arab citizens, the latter comprising a fifth of the population.

Largely segregated communities and separate education systems mean that there are few opportunities for young Arabs and Jews to become familiarised with each other. Even in the handful of “mixed cities”, Arab residents are usually confined to separate neighbourhoods.

In addition, civil marriage is banned in Israel, meaning that in the small number of cases where Jews and Arabs want to wed, they can do so only by leaving the country for a ceremony abroad. The marriage is recognised on the couple’s return.

Dr Yuval Yonay, a sociologist at Haifa University, said the number of interracial marriages was “too small to be studied”. “Separation between Jews and Arabs is so ingrained in Israeli society, it is surprising that anyone manages to escape these central controls.”

The team in Petah Tikva, a Jewish city of 200,000 residents, was created in direct response to news that two Jewish girls, aged 17 and 19, were accompanying a group of young Arab men when they allegedly beat a Jewish man, Leonard Karp, to death last month on a Tel Aviv beach. The older girl was from Petah Tikva.

The girls’ involvement with the Arab youths has revived general concern that a once-firm taboo against interracial dating is beginning to erode among some young people.

In sentiments widely shared, Mr Hakak, a spokesman for Petah Tikva municipality, said “Russian girls”, young Jewish women whose parents arrived in Israel over the past two decades, since the former Soviet Union collapsed, were particularly vulnerable to the attention of Arab men.

Dr Yonay said Russian women were less closed to the idea of relationships with Arab men because they “did not undergo the religious and Zionist education” to which more established Israeli Jews were subject.

Mr Hakak said the municipality had created a hotline that parents and friends of the Jewish women could use to inform on them.

“We can’t tell the girls what to do but we can send a psychologist to their home to offer them and their parents advice,” he said.

Motti Zaft, the deputy mayor, told the Ynet website that the municipality was also cracking down on city homeowners who illegally subdivide apartments to rent them cheaply to single Arab men looking for work in the Tel Aviv area. He estimated that several hundred Arab men had moved into the city as a result.

Petah Tikva’s hostility to Arab men mixing with local Jewish women is shared by other communities.

In Pisgat Zeev, a settlement of 40,000 Jews, some 35 Jewish men are reported to belong to a patrol known as “Fire for Judaism” that tries to stop interracial dating.

Unusually for a settlement, Pisgat Zeev has attracted a tiny but growing population of Arab families, both from East Jerusalem and from inside Israel. Because Pisgat Zeev sits within Jerusalem’s municipal borders, Arabs with Israeli residency rights can live there as long as Jewish settlers are willing to rent to them.

One member, who identified himself as Moshe to the Jerusalem Post newspaper, said: “Our goal is to be in contact with these girls and try to explain to them the dangers of what they’re getting themselves into. In the last 10 years, 60 girls from Pisgat Zeev have gone into [Palestinian] villages [in the West Bank]. And most of them aren’t heard from after that.”

He denied that violence or threats were used against Arab men.
Last year, the municipality of Kiryat Gat, a town of 50,000 Jews in southern Israel, launched a programme in schools to warn Jewish girls of the dangers of dating local Bedouin men. The girls were shown a video titled Sleeping with the Enemy, which describes mixed couples as an “unnatural phenomenon”.

Haim Shalom, head of the municipality’s welfare department, is filmed saying: “The girls, in their innocence, go with the exploitative Arab.”

In 2004, posters sprang up all over the northern town of Safed warning Jewish women that dating Arab men would lead to “beatings, hard drugs, prostitution and crime”.

Safed’s chief rabbi, Shmuel Eliyahu, told a local newspaper that the “seducing” of Jewish girls was “another form of war” by Arab men.

Both Kiryat Gat and Safed’s campaigns were supported by a religious organisation called Yad L’achim, which runs an anti-assimilation team publicly dedicated to “saving” Jewish women.

According to its website, the organisation receives more than 100 calls a month about Jewish women living with Arab men, both in Israel and the West Bank. It launches “military-like rescues [of the women] from hostile Arab villages” in co-ordination with the police and army.

“The Jewish soul is a precious, all-too-rare resource, and we are not prepared to give up on even a single one,” says the website.

I know it's a long article, but I simply had to put the whole thing in there because.. I mean, because look at that last line. It's utterly perfect in every way possible. that last sentence makes the article; "we are literally better than everyone else. not racist."

These Israeli Zionist are fucking retarded. They don't deserve their own state. You would think that they'd have learned after two millenia of being shit upon, but noooooo, they're just as fucking racist as the rest of humanity. Fuck them.

That's a big FUCK YOU long before I even get on the subject of the restriction of Woman's rights. I don't know if you all knew this, but Israel is literally an apartheid state that is only slightly worse than South Africa. The problem is that the state of Israel is an explicitly racist state founded specifically for the purpose of protecting Jewish racial purity. It's some deep South 1920's type of shit.

Oh, you didn't know? Alabama drove to prevent White girls from dating Negros way back when. Let's just replace some of the key terms in this story and see what it sounds like.....

BIRMINGHAM // A local authority in Alabama has announced that it is establishing a special team of youth counsellors and psychologists whose job it will be to identify young White women who are dating black men and “rescue” them.

The move by the municipality of Selma, a city close to Montgomery, is the latest in a series of separate – and little discussed – initiatives from official bodies, ministers, private organisations and groups of white residents to try to prevent interracial dating and marriage.

Yeah, sounds pretty racist, doesn't it? Israel is what Nazi Germany wishes it had been. Pretty ironic when you think about it. You can have a policy of tacit genocide, racial purity and annexation and as long as you don't go out and invade countries that have powerful defenders with treaty obligations, you could literally round people up into camps and nobody would care. 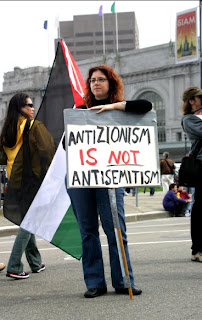 Being in the industry, I work around a lot of Jewish people every day and I have to say I never been around more openly racist people in my life. But it's endearing when they do it, so no one pays no mind. Oy vay! Fascism killed 6 million of our people, so you know what we are going to do? More fascism! It's brilliant, isn't it? Reminder that Zionism was suppose to give the Jewish people a place to live

1.) in peace
2.) without feat of Antisemitic attacks.

Yeah, way to go on that one, people of Israel. 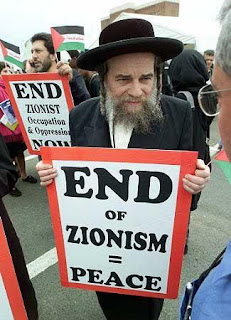 What's even more insulting is the whole preserving the Jewish soul... Let me get this straight, so if a Jew and an Arab have babies, do the babies have a half-Jewish soul or not-at-all-Jewish-soul? I need to know for my soul arithmetic class. Probably not as good as a Jew soul, but a hybrid helps offset Arab emissions.

If this were the setting for a modern day Romeo and Juliet, would Palestine be Montague or Capulet? I'm going to go with Palestine being the Montagues because that would make Iran Mercutio, desperate for gay Palestinian love but unable to stand up to the might of Israel's Capulet dynasty.

Either way, all this Zionist bullshit just gets me pretty sick.
Posted by Booster Gold / Javier J. at 6:51 PM