A Wedding That Wont Run Out of Steam

A Wedding That Wont Run Out of Steam

While the chance to be a June bride has already past us it's still not too late to get in on the wedding action. In case you didn't know, Wedding season runs between mid-April through mid-October. While most everyone else desires to be happy in being a June Bride, the following people aren't content with being that, or even considered anything near normal while we're at it.

They take their wedding to a different direction.. A steam punk sort of future.. or is that past? Yeah... not sure here. 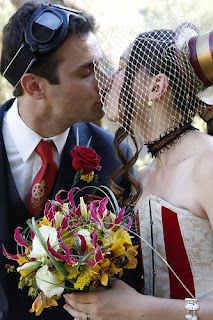 Steam Punk is basically the act of pretending to be from the early 20th century except in the future in that some where along the way instead of Edison getting electricity going, everything is powered with fucking steam. So it's highly advanced late 19th/early 20th century tech going on up in there.

Think any Tim Burton film mixed in with Wild Wild West.. speaking of which, Wicky WICKY wild wild west.. If there's anything we needed more of, it's Wild Wild West themed weddings. 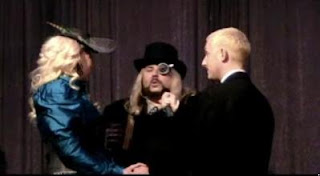 I mean, maybe it is just glorifying and fetishizing archaic colonial society and values to glory in their privileged whiteness both in fantasy and reality, but then they just figured why not bump it up a notch with technogadgets.

It's as if they would like to be Victorian nobility but don't think they could live without computers and iPods; Steam-powered of course, you gotta keep that level of realism going. Can't break the fourth wall.

I think everyone owes it to themselves to google image search STEAMPUNK WEDDING, It's pretty insane the level it's taken. 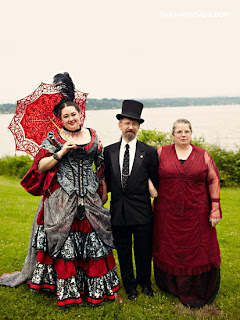 I can't believe they got the parents to participate in this whole wedding in full dress. "NO DAD, I WONT BE SEEN WITH YOU UNLESS YOU WEAR YOUR GOGGLES!"

This next one looks like they've been spending too much time in Hitler's youth camps. 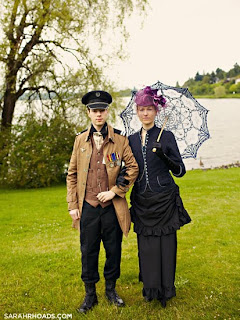 Though I have to say I do dig the purple hair. The dude in the next picture just looks sort of lost. As if he couldn't find any props from the set of Jonah Hex, so he's doing his best 10th Doctor impression. 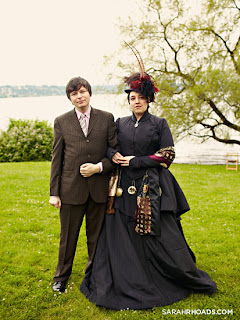 Sadly though, I think all steam punk divorces look pretty much the same as normal divorces.

Then there's this next guy, I'm not even sure.. I mean, maybe he's the best man because he has some wicked awesome goggles. But much like in the Simpsons, zeee goggles, they do nothing - for your coolness level. Maybe the dude is just going to warm up his vaporizer and get steam crunk..... 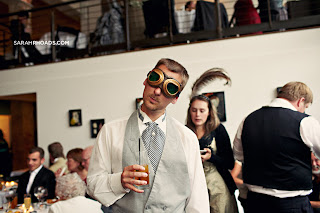 Then there's the steam punk food. The cakes are something else. I do wonder how many broilers it took to cook these up and what sort of heat levels you're getting in a coal burning oven to get these master pieces. 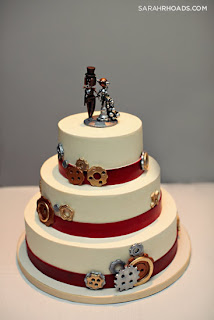 Like, I may just turn steam punk to have this robotic little bride and groom on the top of a cake. Too bad they can't make it for a birthday cake. I don't think they celebrate birthdays in a steam punk sort of world 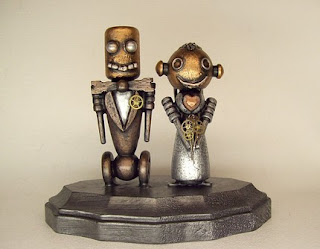 And this next one just looks amazing. Though I'm sure it's full of fundant - a substance I hate with a passion. Like, I guess I could just stair at these cakes for hours without the longing to eat them up really quickly. 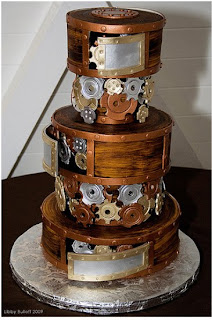 There's a lot of cogs in them. It's as if this is all during the industrial revolution.. but they had power and electricity during that era. Oh this strange fake world with all it's strange rules and what not. 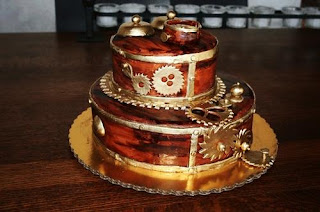 I mean, you gotta respect them since they're doing their own thing and all. Your wedding is all about making it a day about yourself. So when you're a really odd person who wants all these strange bells and whistles and it's your interest.. why not, right? 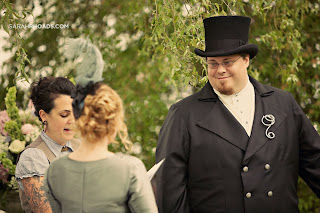 But at the same time, I'm going to talk my trash because.. well, that's just what I do. Don't lie.. you know you people love it when I'm openly mocking others for their life choices. Just know I kid. 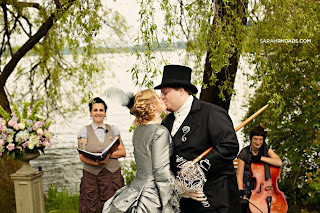 When the bride tosses the Zybourne clock, whoever catches it is the next to get married. Just check out those steam punk flowers. Looks like something straight out of the mad labs of Dr. Malaprop. 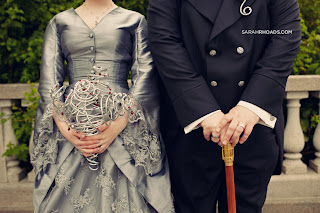 Just look at that guy's pinky. It's chubby as all hell. I wonder if in a steam punk world you're stuck eating dim sum and dumplings all the time. Wait, that's not his pinky, it's his pointer finger. Wait, no.. it's all his fingers. Yes, now that I look at it, All of his fingers look fat.

As a socialist I have to wonder if Steam Punks actually dress up in any sort of working class attire of the era. It seems that people just lament that no such thing existed and your standard steam punk clothing just falls back to some upper class fantasies. 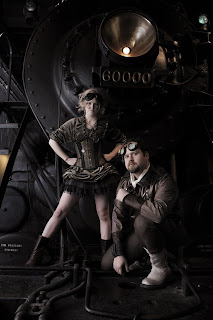 For coal/broiler operators they sure as hell look upper class. I mean, who the fuck would be wearing that dress while shoveling coal to keep your higher ups filled with "green" fuel?

At Comic Con there was a lot of steam punk cosplaying up in this bitch. I just have to wonder why you would take a normally strange concept of dressing up as your favorite comic/pop culture character and spice it up with some Steam Punk? 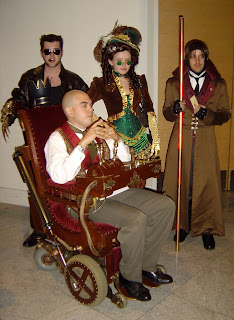 I really wonder if the chair is powered by a pile of burning coal boiling water, strap me in cause I'm ready to go! Who cares about mind reading, get me some super powered coil run wheel chair!

I'm unsure why guns/weapons are such a big part of the Steam Punk world. It's as if the world of Steam punk is rifle with airship pirates and other ne'erdowells. How is a gentlemen of impeccable character and honest intentions to defend himself from those ruffians pillaging and plundering the outside world? 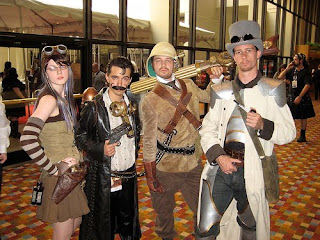 Social commentary here - If you're wearing two pairs of eye wear at the same time you are completely oblivious to what you are trying to do here and it's all for show. I mean, really? Two pairs of eye wear? What are you, a fucking diamond seller?

If you can afford to go all out on looking Steam Punk, you'd think you could probably pick up some frames that looked better than five dollar reading glasses from rite aid, right?

I do have to say that it's at least a lot better than the real way to kill any wedding.. which I'll leave you with a video of the best (worst) possible thing you could have at your wedding in destroying any sort of shred of decency you have going for that special day with..