Here's a fun fact - a lot of firefighters apparently cannot stand pork meat because the smell of burning human meat is apparently very similar to that of pork. Hmm, who would have thought. Maybe if PETA used that fact first, they'd get a better reaction. I'm sure Americans would still not give a shit about animal rights, but at least that'll make them stop for a second before they put some bacon in their mouth. To be honest, I'm there with them. Check out Peta's latest adventure in trying to scare us into not eating meat.

I missed yesterday's PETA's anti-meat demonstration on the Country Club Plaza, but the animal rights organization sent over a few photos of nearly naked women wrapped in cellophane on a tray ... just like a KC strip. 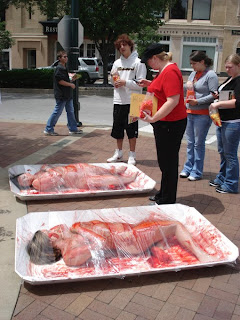 Something is wrong with those girls. I mean, they look hot as hell. And I don't mean as a form of objectification. I mean, seriously. Look at them. That must be hard to do in such harsh sunlight. But now that I mention it, for being dead, their hair looks terrific! 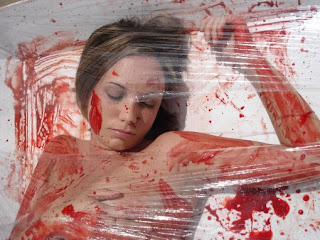 Oh! You better cover that titty, girl. Don't want to be too controversial now. I mean, really. If you're going to get naked and put into a comically over sized meat package covered in blood and sit out in the sun for all to see, don't cover your boobs with your arm and think you have preserved anything resembling dignity. You haven't. You might as well let those girls fly out free... just like nature intended. Let 'em hang out. Be proud. You are woman, show me your titties.

I mean, naked chicks under saran wrap.. that's like the basis of a joke created some time prior to 1959. Way to be part of the patriarchy. The asshole in me thinks that if I saw this in person, I would be buying a sack full of fast food burgers for me and my friends to eat standing over and ogling at them. I mean come on, let's not go waaaah waaaah waaah and baaaw baaaaw baaaaw over some dumb animals.

I'm not sure I get the point of this. Someone should tell Peta we aren't cannibals. Though now that they bring it up, maybe I would like to try some cannibalism. Maybe it's just to guilt you into thinking about how you're killing animal families. 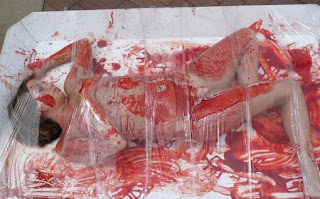 I hope you sit down and think real hard, mister. Just think about how that chicken you had for dinner last night was some other chicken's daughter! Then again.. the green beans I ate it with had parents too... I'm a monster! Maybe that's why I eat chicken and eggs together. So that I'm not leaving orphans.

I mean, what do they really want? Should we give animals rights? Maybe we should just so I can vote a dog into office. I can't wait to see the presses now; President Rex defecated in Putin's office today during a meeting for nuclear disarmament, further straining US-Russia relations. Possibly the worse is when people force their vegetarianism on their pets. Now that's gotta be the dumbest thing I have ever heard of. Then again, we know PETA's motto.

I mean, why does Peta need to get so crazy for anyway, what the average American consume thinking is meat is mostly corn filler and entrails anyway. It's equal to eating a tofurkey. So why bother doing it? Does this make anyone not want to eat meat? Doubtful. If anything it just makes folks not want to have period sex.
Posted by Booster Gold / Javier J. at 11:45 AM