I was going to call this one knifing around, but I like that Space Ghost episode too much to insult it in that way. Today I bring you a good question. One that you will be stumped to attempt to answer. Why do you need a big sword? Why?!? I ask because it seems like these swords are always sold to people....

I.. I just don't know. I can't even picture who the market for this shit is. I guess I can. Pretty much the people demoing the products. But then how do you make your money? It does ask a good question;

"What more do you want in a sword?"

How about concealabity? Maneuverability? A majority of combat situations occur not out in the open, but in the surprise of a slightly confining space like a hallway. Speaking of if you are ever going to be such a bad ass to take down the criminal element in your home after a bad breaking and entering, perhaps a short sword is a much better weapon.

So this huge sword cuts meat and stationary objects. That makes it a meat cutting execution weapon. In my experience things don't stand still when you try to kill them... except chickens. The great sword is, for this reason, obsolete technology because it was designed in its time for decapitating enemies from horseback. Its power is in the weight and speed behind it. Really unfit for anything but to prove your a fucking nerd in this modern day.. That or you really want to sell your Ren Faire costume as over the top.

And even with the shorter blades, those things look very bulky. You do realize that if you have just one really good chefs knife, it would do all that work for you. I mean, Jesus. I don't know how many times I have cut myself just doing mundane cooking techniques with my Global knife. I'm pretty sure that with some added pressure, it could go through a chest cavity with ease.

I had a friend who on his sixteenth birthday party, his parents got him a sword. I recall him saying that he maybe asked for one when he was eight years old or something, so instead of getting his drivers test paid for like he wanted or some sort of computer equipment, etc. they got him a sword.

Which does beg the question on how useful a sword is. I bet he took it up to his room after and pondered "what the fuck am I suppose to do with this?" Perhaps I'm just missing out. The sheer joy on that manchild's face reminds me of a childhood feeling, lost forever, but his stunted nature makes me sad at the things he will never experience. I guess you can never be too old to be a manchild. I mean, even when you're not able to walk much and in need of aid, you can have a sword. Yes, that's right. Just cause you're too brittle to carry a two handed sword doesn't mean you can't have a sword cane!

The cold steel sword cane means you'll never have to worry about depending yourself or your loved ones from a stationary threatening looking pile of raw meat ever again! Again, who buys these things? Who thinks that it would be of any use or finds the need to romance an old weapon style so badly that they need to purchase a sword?

Oh wait, I know. This is the kind of person who wants this..

I think that video sort of proved the theory floating around in the back of my mind. That these sword products are for middle schoolers who got constantly teased as a kid. It's a very warped idea of compensating. At least if you have a small dick you'll be driving a fancy car. In this case, all you have is something that makes you look like an even bigger loser.

I can just imagine what's going on in their mind; "Oh yeah? Would a 'fag' have a hadhafang, sword of the fairest elf maiden arwen? I thous think not!" 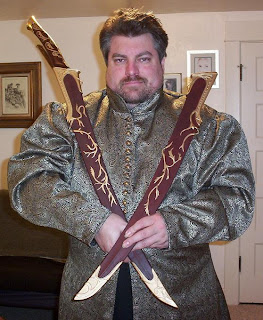 Oh man. I bet the pizza boy won't be bitching when you don't tip him once he sees the two handed great sword next to the door, now is he? No way, maybe it'll strike some fear into him so that the next time you get some free cheesy bread as well!

Is there any real practical use for these knives? Well, let's ask this guy who clearly hates cardboard.

I guess I could see how it would be a lot of fun for maybe.. like half an hour or so to just hack shit up with a sword like in those videos. But that seems to be the limit to it. The swords seem as useful as a paper weight more than anything else. Unless of course you have a sudden need to hack up well stacked inanimate trash.

I have to wonder if there's any way to use these things as intended without going to jail for murder or dieing or getting shot.. or even worse, accidentally cutting off your own limbs? I guess the thing that these people seem to latch onto is the fear that people would rather be shot than slashed with a sword. As being slashed with a sword means you may probably die, but if you do live you're going to be potentially without a limb.

While that's very menacing and all, I think I only need to remind you of the scene from Raiders of the Lost Ark to remind you which one comes out on top.

I think I lost IQ points while reading this. Firstly, learn to write, the errors abound. Secondly...swords are obsolete?? NO SHIT SHERLOCK. Thank you for cluing us all in. The fact is that some people think swords are just plain cool, or they like history, or they have one of any number of reasons for buying a sword. Fact is, your judgment means nothing, and I'm sure you have some things that I would deem a waste of space, too. I know its a novel concept, but some people think differently about the world than you do. Thank God.

I like Big Swords and i cannot lie!!!
Call me nerd all you want I´ll just cleave you in half!!!

The next thing this man will said is "Hey guys Arrows are soo middle age and obsolete we have bullets now!"...

Everything will become obsolete given enought time, exept swords and any other medieval or ancient weapon, they are GREEN (wasteless, don´t need fuel and they dont cause polution, good in general to the enviroment) and had a great eficience vs cost vs maintenance rate.