I just have one question... What happened to the Tim Burton who directed Ed Wood ? That guy was awesome.

Okay, I have more questions, but let's just start with that. The next question is what have you folks NOT have planned that you made Alice such a huge hit? News broke fast on Friday (when I started writing this) that the matinee screenings for Alice were selling extremely well. How well? Well, it's expected to pass 100 million in a simple weekend. How did it do that huge number? 3D, that'll help it rake in the money.

Then again, one shouldn't be shocked that a majorly promoted film from the most well-known studio featuring one of the biggest stars in the world, directed by a director whose style is now so developed he's a brand name would hae a disgustingly huge opening weekend. The Tim Burton gravy train ain't gonna stop anytime soon, especially if he keeps latching his cars to the unstoppable engine of blockbuster that is Johnny Depp. 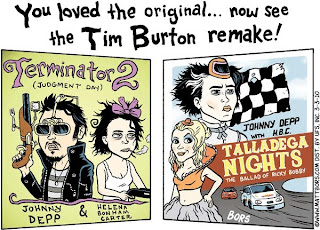 Let's just get it out of the way that there's either going to be a sequel or another "re-imaging" of a story because the weekend estimates are in, and Alice and Wonderland did $116 million in the U.S. and $94 million overseas for what's likely to be a $700 million in the global run. I can't wait for the future Burton films...

Tim Burton's The Old Testament, with Johnny Depp as that waaaaaaacky prophet Moses!

"Ahahaha, that crazy guy! Look at him smearing blood all over the doorframes! And now he's hitting rocks to make water come out of them?! What a crazy guy!"

Cue to him dancing the Fudderwhacken around a burning bush.

Then after that we'll see the next one.. A future Tim Burton classic as it should be.. a live-action version of Moby Dick. It can have tons of awkward CGI, Queequeg could have a much larger role and be played by Johnny Depp, Helena Bonham Carter could play the whale, and Crispin Glover could play Ahab and have a freakishly lanky CGI body. Then Ishmael could fight a Jabberwocky.

I feel like we could do this with pretty much any piece of classic literature. The real scary thing that you should be worried about is that Tim Burton will finally get his Wizard of Oz reimagining that he has wanted to do for a long time now. 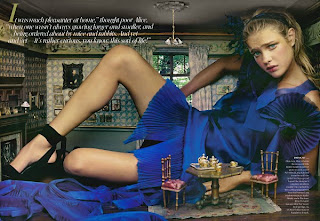 Which, when you think about it.. it's kind of scary how similar they are. A young girl having strange dreams, might be mad because of them eventually returns to the land that inspired these dreams. I mean, after that the comparison vanishes.

Return to Oz had Dorthy looking for her familiar friends only to find new ones at first. Sure, towards the end, she is re-united with Scarecrow ant the Lion, but she spends most of the journey meeting new friends and she even vanquishes a new foe, rather than a re-hashed re-encounter with a character she already met.

Alice in the new movie may not remember much, but she has met all the characters before, and in incredibly similar situations. In summation, Return to Oz was so much better than Burton's Alice. 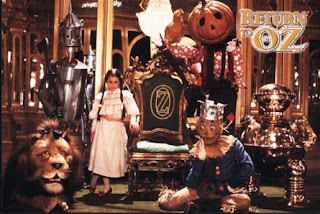 It's hard to say this, but it's Depp that made me not fully enjoy this film. An actor who I thought pushed the acting in his roles for as many movies as I ave seen him in... just failed on this one. Depp gives the most insane and idiotic performance of his career and it's rather stupid to think that no one stopped him at any time and told him that the choices he was making did not work on any level.

He weaves in and out of a bad Scottish accent, supposedly part of his madness. He just turns on wacky mode and doesn't give a fuck for two hours. Some of you will tell me "well duh, he's the mad hatter" and I would roll up a news paper and smack you on the nose and say NO! NO! BAD PERSON! DO NOT ENCOURAGE THIS STUPID ACTING! 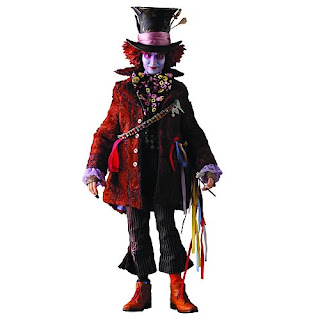 Throughout the film there are veiled references to a type of dance that Depp's character used to do before the Red Queen took over. Then at the end, after a dark, bloody battle, which includes decapitation!, a bizarrely contemporary hip-hop beat starts playing and Depp's Mad Hatter does the stupidest dance I've ever seen. His head and feet spin around in circles, he waves his arms all over the place. It's completely out of place.. strangely enough, out of place even for a land like Wonderland.

That stupid dance.. and what only added insult to injury was when they made a callback to it literally three minutes later. Like they thought we had forgotten the dance and wanted to remind us again that yes, Johnny Depp can dance like a complete retard. I felt like Depp was physically assaulting me throughout the movie. Then we go to Bonham Carter's Queen from Blackadder, only not as funny. The Cheshire cat was good, but it was Stephen Fry, how was he not going to be good? And it would actually help if he'd had an actual role in the story. And the story.. should I even get started on that?

The movie is framed with a glossy colonialist tale of exploiting Hong Kong to get a foothold in China, so far so bad, but then you get to the meat of the story, which is about the poor, people of Wonderland needing some shining symbol of hope before they can find the will to throw off the shackles of oppression and overthrow the Red Queen. 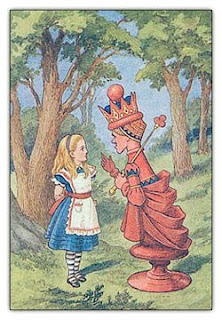 The problem here is that they already have a capable leader in the White Queen, but she has taken some kind of vow, which prevents her from killing anyone, although using other people to kill for her seems not to be an issue. Her inability to do anything allows her subjects to suffer and her hypocrisy makes a mockery of her vows anyway as she was just waiting for a patsy to come along and get her hands bloody. The people of Wonderland get the worst of both worlds in her.

This symbol they need, is Alice killing the Jabberwocky from the Muppet TV show. Even though the Vorpal blade is said to work pretty much independently anyway, so the story is actually about Alice recovering a sword from a kennel, which she does about half way through the movie. Magical sword in hand, she kills the muppet, just as anyone could do because again, the sword deosn't need a fucking hero to operate, just a hand to hold it!! The Jabberwocky is now dead, and everyone decides that they no longer need the red queen so they tell her to go away.

You see, people only need hope in order to overthrow dictatorship, and once they have that the resulting coup will be clean and bloodless. The will of the people is the only thing that matters, if you wish for it hard enough then you can have what you want. It's a fantasy about the real fantasies that Americans seem to have about countries they dislike. This film highlights a lie. 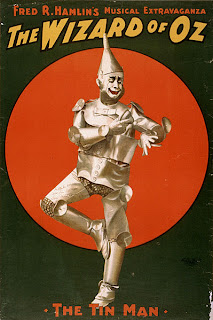 The film reads like a child's interpretation of American foreign policy, or rather, someone explaining to a child how bad people and good people exist in the world. The two opposing forces meet on a chessboard at the end of the movie and the characters are, for the moment, framed as disposable pieces, to be used and thrown away by two equally despicable rulers who are fighting among themselves, rather than for their people. There's no message in this though, there's no thought or concept or subtext. It's utterly empty; very much like Planet of the Apes. It's there to take your money and noting more. A ride at the fairgrounds has more thought put into it.

Here's an impossible task, complete the sentence "The best part of Alice in Wonderland was..

I'm sure the following will be the only answers you choose:

This was nothing more than plastering Alice in Wonderland characters over generic fantasy adventure movie plots for the sake of profits. It was completely contray to the spirit of the books. 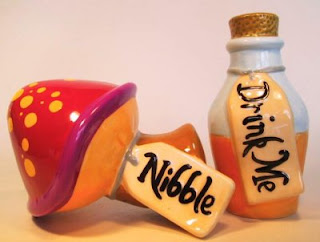 I'm also confused by the message of the movie. Early on in the film they setup Alice returning to Wonderland because she was refusing to conform to her role in society. They basically paint her as a Victorian era nonconformist goth kid without all the black makeup. She is generally refusing to do anything anyone tells her to do, but then she gets to Wonderland and ends up doing what everyone tells her to do completely by accident. Way to teach the viewers a lesson in sticking to their convictions.

Why would they make a movie in which the main character is an entirely passive being who does nothing but bend to the will of whomever is talking to them? How is this good storytelling? The only decision Alice even attempts to make for herself in the movie is to become The White Queen's "Champion", and it's practically goddamn spelled out for her by everyone she meets and is even told to in the fucking parchment paper. Why on earth were people like Annoying Mouse and the Tweedles offering to be the champion when they already saw the parchment unfurled with Alice facing the Jabberwocky at the beginning of all of this? And why did the Jabberwocky shoot lightning straight out of its mouth like if it was Emperor Palpatine?

All these questions and really.. it's only making me angry thinking about how this movie failed on so many levels. You can even say that I'm as mad as a hatter...