Let's All Stand And Deliver For A Moment of Silence

Let's All Stand And Deliver For A Moment of Silence

One of my ex's who was from West Virginia had a film that touched a chord with her because of her roots. The movie was October Sky and it did so because it was about the story of how a West Virginia group of kids, who weren't expected to grow up to be nothing more than coal miners in the local coal miners defied the odds and became rocket scientist who ended up working at NASA.

It's a nice story and it does take the route of the whole cheering for the underdogs or those who seem to have lost all hope of ever changing their predicament in life. Besides that, it had my youthful doppelganger Jake Gyllenhaal in it. So perhaps since I get told the Donnie Darko bullshit often enough and I have my hair typically combed in that 1950's classic look, it doesn't help this case. 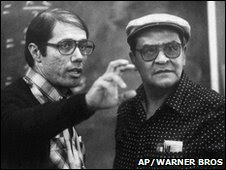 I can relate to this because I have my own "expected to achieve nothing but against all odds advances and surprises everyone" local story. That is, Stand and Deliver. It happened in my own back yard, after all. This is the story of Jaime Escalante who was teaching at Garfield High school. This school right in my back yard growing up and is one of the schools I could have gone to.

Mr. Escalante took a group of students who's school didn't even have the books to teach a Calculus class, and these folks weren't expected to go anywhere in life, and got them to pass with honors. Then after they passed the test the students were accused of cheating because they passed it all too well. Now this is just me getting all down with my brown self, but of course it was because they were from a poor ass school and were never given a chance. They retook the test and still passed. Jaime Escalante give them the Ganas to believe they can achieve such things.

The California maths teacher who inspired the film Stand And Deliver, Jaime Escalante, has died aged 79.

Escalante, a Bolivian immigrant, transformed a tough high school in Los Angeles by motivating struggling students to excel at maths and science.

The school had more students studying advanced calculus than all but three other state schools in the US.

Olmos said Escalante had proved that inner city students were able to perform at the highest level, and left an important legacy for American education, AP said.

And before you have the chance to say it.. yes, I strangled him and his body's decomposing in my locker, ese.


I strangled him and his body's decomposing in my locker.

The story of Jamie should be one that every teach should take to heart. In one of his last interviews he said this about teaching.

"Believe, believe. Believe in your kids. They will surprise you."

Just listen to the guy.

I like him for the sole reason that he illustrates how terrible the majority of the teachers are. Everyone was failing that high school, finally a good teacher shows up, they pass, he leaves the school and everyone starts failing again. It's sad but true. The Garfield High math program floundered after Escalante left in 1991 for a teaching job in Sacramento, California.

He's the perfect example of how a teacher should be and if you're going into that profession, you should take a few notes from him. Inspire and expect more of your kids. Believe in what they can do even though the odds are strong against them.

There will be no free rides, no excuses. You already have two strikes against you: your name and your complexion. Because of those two strikes, there are some people in this world who will assume that you know less than you do. *Math* is the great equalizer... When you go for a job, the person giving you that job will not want to hear your problems; ergo, neither do I. You're going to work harder here than you've ever worked anywhere else. And the only thing I ask from you is *ganas.* *Desire.*

It's common knowledge that teachers don't get the respect they really deserve in our society. The pay level is pretty abysmal. So for someone to take the job that is otherwise thankless and to put that much of yourself into it should be respected and commended on. 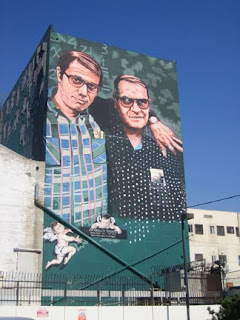 So if you will, take a moment and think about the teachers that changed your life and actually told you something you retained or changed your view on education. Let's make a moment of silence that will also be lumped together with Jamie Escalante..
Posted by Booster Gold / Javier J. at 4:49 AM