Pot On The Books

Pot On The Books

Well, it looks like we're getting a chance to legalize pot come November. Fuck gay rights, as long as I can toke up in front of a cop, it's all good, right? Yup, who knows, maybe we'll actually legalize it this time;

California voters will decide this November whether to legalize and regulate adult recreational use of marijuana as the Secretary of State today certified that a Bay Area-based effort to put the issue on the ballot has collected enough signatures to do so.

If passed, California would have the most comprehensive laws on legal marijuana in the entire world, marijuana reform advocates say. Opponents are confident they will easily defeat the measure.

The vote will be the second time in nearly 40 years that people in the Golden State will decide the issue of legalization, though the legal framework and cultural attitudes surrounding marijuana have changed significantly the past four decades. If Californians pass the measure, it would be the first in the nation to do so as similar efforts in other states all have failed.

Backers needed to collect at least 433,971 valid signatures of registered voters and the Secretary of State said they met that threshold.

If voters approve the ballot measure, it will become legal for Californians 21 and older to grow and possess up to an ounce of marijuana under state law. Local jurisdictions could tax and regulate it, or decide not to participate. Marijuana would continue to be banned outright by federal law.

Current state law allows a person, with a doctor's approval, to possess an amount of marijuana that is reasonably related to the patient's current medical needs. People also can obtain cards identifying themselves as a patient, which helps in interactions with law enforcement.

"There is no state that currently allows adults to grow marijuana for personal (recreational) use, but what is totally different and will be a game-changer internationally is this would allow authorized sales to adults as determined by a local authority," said Stephen Gutwillig, California State Director of the Drug Policy Alliance Network, an organization advocating for changes in drug laws.

The major backers of the initiative - the founder of an Oakland-based marijuana trade school, a retired Orange County judge and various drug law reform organizations - are planning to oversee a $10 million campaign to push the measure.

My first reaction is why do you people care so much about weed? Geez, try being a little incremental and decriminalize it first, don't you think? No way can you go "All in" and expect to get it passed. Yes, I think it would be fucking funny to see what the Federal Government's response to all this would be, but seriously now.. Do you need it legalized? If you couldn't get gay marriage passed, you wont get weed legalized. And if you do, then we sure as hell don't know what our priorities are.

The article may be a little old but it's news since the Secretary of State officially certified the signatures today. So hey, gonna legalize it. We're gonna get our law enforcement funding pulled by the Obama administration and we're gonna slide further into bankruptcy. Can I get a "Hell Yeah" up in this bitch? Who cares about education funding when we can all just kick it with some weeeed, yo. No need for proper school budgets unless they have botany or herbal studies. 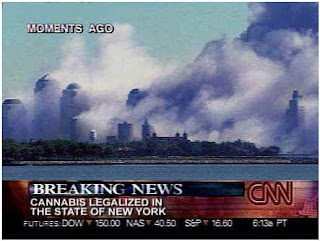 It's just not possible at all in this or any other reality. Especially with the mindset of thinking about the children. Even if we're in a sort of California über alles sort of state. Though, anything but a crushing defeat will only propel the legalization movement further, at least to the minds of those who are trying to push this stuff into law.

I realize that weed prohibition has enslaved more American blacks than slavery. And I have heard that if you don't support weed legalization then you implicitly support millions of nonviolent users being sent to prison for it. But you do realize that they just signed a bill in the senate to ban smoking literally everywhere outside, no parks/benches/picnic tables, etc. And you're shooting for a legalization of weed?

I NEED TO LIGHT MARIJUANA LEAVES ON FIRE AND THEN INHALE THE SMOKE MANNNNNNNNNNNNNNNN. I. CARE. SO. MUCH. ABOUT. INHALING THAT SMOKE

It's clear that Obama's administration is dead set against legalization, so this will do nothing. And it won't even reduce crime so long as its still illegal in Mexico. Though really, why are you importing your weed when we have perfectly good room to grow our own locally. Don't you realize you're being bad to the environment by wasting so much gas to transport that Mexican shit over? Come on, man. Think green for a change!

You may think that California is pretty liberal, but California seems to be one of the least progressive states in the nation. California is a metaphorical boulevard of broken dreams. Think of it this way, California gave us Ronald Reagan. All you stoners, do yourself a huge favor and NOT get ripped on voting day. I'd hate to see this share the same fate as a Simpsons episode and you ending up forgetting to vote.

Let's face it. Even Jerry Brown is opposing this. Given, he was a terrible governor decades ago and he's going to be a terrible governor now, too. And when it comes to those undecideds on this issue, they are most likely going to be women in their 30's and 40's with children. Those who don't have children will see that their lazy ass boyfriends are pot heads. So sorry, this shit isn't passing.

And what if it does? Well, just think of the number of Checkpoints on every highway coming out of California. Nevada, Oregon and Arizona will have cops with those dogs sniffing out for the tiniest trace of that demon weed in their vehicles or on persons. It'll be comical, if it's not a nuisance to drive on vacation.

But hey, it does mean that with legalization, the population of California will go up and that would lead to more taxes being levied on them. I mean, everyone loves drugs, right? This can lead to nothing but money raining down on public schools and all the systems that need some funding badly...okay, who am I kidding? All that money will just go to stupid props we pass like crazy trains and more police officers on whatever street corner. 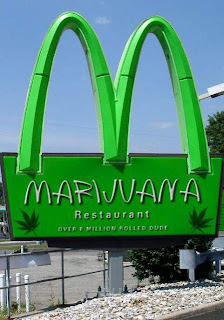 So what's my stance? I really don't give a shit. I don't smoke it. Maybe my Dad would like it. I mean, he does have a pretty mean bong sitting around in his computer area and all. But I frankly don't give a shit about legalization. It's not like it's all that difficult to get now and if you smoke it in the privacy of your own home, what's the problem?

Now I will be pretty peeved if we can get pot legalized but can't get gay rights.
Posted by Booster Gold / Javier J. at 5:18 PM