Well, you may have finally received your 2010 census. You may have heard this little 10 question/10 minute piece of paper that just hit your mail box from the warning letter you received last week. I bet you're wondering why in the year 2010, we are still resorting to paper to get a Census going. The Census department's reasoning behind this is that they can't build in the appropriate security measure to be able to handle such a system.

I know what you're thinking, why aren't I outraged by this? Billions of credit card transactions are flying across the internet at any give moment. You can get your licensed renewed on the DMV online, So why can't you do a silly little Census on the internet and save the money wasted on postage stamps and paper work?

Busy work, of course. In this tough economic time and the fact that the unemployment numbers are still high, the Census provides a lot of jobs for folks. It's busy work. It's not really something that you need a qualified person to do. This is work that is much easier than a cashier or bagger at the grocery store. You simply count people. How hard is that? The count can do it, for Christ sake.

Employees will be sitting at computers typing in all this information that you provide from your 10 minute/10 question survey you got in the mail. I have to admit that I find it weird that they ask for your name. What's the point of that if they're asking for age/race data? Consider me a little tin foil when it comes to that regard, but it is a little odd to get too detailed on this. Besides, don't you get my age, name and social security every year when I fill out my taxes? 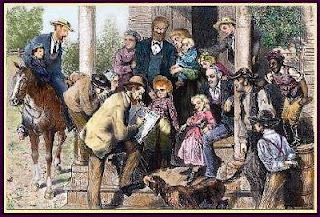 Though I try not to be too tin foil. I have a buddy who was all freaked out and told me how some co-worker showed him a video about how the Census is a big conspiratorial invasion of privacy- blah blah blah, When I showed him how short my form is he was a bit surprised.

I'm not really sure how anyone can complain about the privacy levels of the Census. I mean, every year you fill out a 1040 with detailed information about your income, social security, bank accounts and so forth. So why are you complaining about a Census form?

Just think how fucked up it would be if we did do this via the internet: "Okay, Grandma, now hit the submit button. The SUBMIT button, on the left. Grandma no, grandma not the cancel button!" Fuck that noise, keep the mailing going on, even if they're pissing away a lot of money. 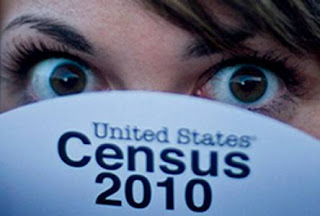 I guess it just hit me that the IRS is not allowed share their information, so the Census can't just knock on the IRS doors and ask to borrow the list of people that have filed for taxes in America. Once the Census is done, they are allowed to share the general statistics, no personal information.. So I have to wonder if our fear of our privacy.. or should I say illusion of privacy is not holding us back on bigger and better ways to go about in our nation's over all growth.

At Artwalk in Downtown the other night there was a Census 2010 promotion booth giving out Census freebies to anyone who walked by. They told me to take one of everything I wanted. I got; A hat, piggy bank, pen and pencil, tote bag, chip clip, key chain, small fold-out mirror and a note book with the Census logo on the front. I was a little confused by this level of giving and had to ask why they were giving me a lot of free shit. They said that it was okay because I was paying for it with my tax money... at that point my free stuff didn't feel very free... 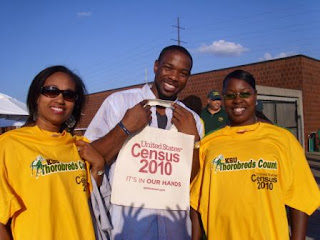 I know a lot of my neighbors and folks on my street are all like "Man, I'm not filling that shit out, fuck the government!" even though it takes all but four minutes to fill out. The most challenging part is remembering your own age. Even though my birthday is coming up I always think I'm either older or younger than I really am.

There's many people who are throwing theirs out because they feel that asking how many people live in a home is an invasion of their privacy. I'm tempted to toss my Census form into my compost pile. Go Green, motherfuckers!

But I wont, even if I just got so annoyed at it. You see, if you take a moment to read it you'll be seriously offended as well. One question ask "Please tell us how old you are", only to be followed by "And now give us your full birthday".... Um, just do the math you lazy fuckers. It's bad enough you hired a slew of morons to do this Census, perhaps you could make them work? 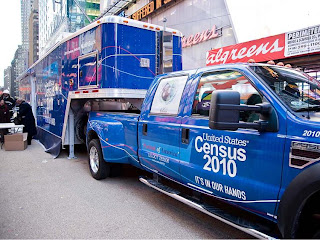 Then there's a part where they said to include all people who live in your house/apartment, including babies, on your form. Do people seriously forget to include their babies on questions like this?

Then it's also hard to remember the names of all the MIGRANT WORKER ROOMMATES that I have here. Way too many to list in one sitting. Does it surprise you that you can claim undocumented migrant workers on the census? It'll only be a couple of years before you will get tax breaks for them as well.

This brings up a new question though. How many undocumented workers are you going to claim live with you? I live in an empty apartment building that I'm trying to convert into apartments. Each unit is about 700-100 ft, so I think I can get away with 5-6 people per unit. that's 20-24. Ha, oh man, I'm going to really fuck with their book keeping. Though, I probably shouldn't lie about it because overstating would give more representatives to California and really, we're already the laughing stock of the nation, no need to give them the surprise that we have over a million more undocumented workers.. at the very least. 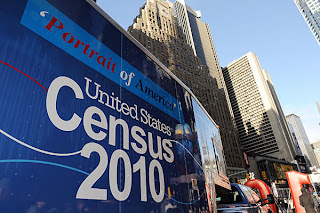 The biggest offensive shit on the Census form was nothing more than how to write. In that it told me to use a blue or black pen. Oh.. FUCK YOU CENSUS, How dare YOU tell ME what to do. I showed them though, I filled it out using a yellow crayon. Score one for the little man!

I think that in one week, we'll all be receiving a letter asking us if we have filled out our Census and mailed it in.. A week after that we'll all receive a thank you letter. But before that we'll get a letter informing us of the upcoming thank you letter, and the subsequent letter containing form D-308B-2010, "Request for replacement letter of thanks, U.S. Census 2010".
Posted by Booster Gold / Javier J. at 11:35 AM