We've been in Spring for a whole week now and the only question I have for you is if you're ready for what that means for fashion! Oh yes, bust out those Sundresses!!!!

Okay, I'm getting way too excited for sundresses. Can you blame me? I actually like them a lot. Yes, you'll get a tan while wearing one and for those who have larger than average breast, it may be a little odd to find proper boob support in said sundress, but come on, you have to admit they are rather nice looking? 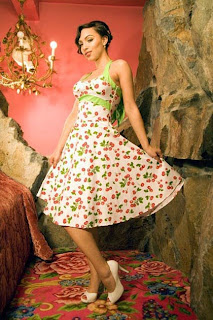 I'm getting on a tangent here. While yes, I love me some sundresses and I fully support the massive outpouring of wearing them in weather that does get a bit hotter, we're missing the purpose of the blog and my mind slipping into thinking about sundresses should be curbed.. Let's move on to the meat of this message...

It's the first week of spring already and besides sexy.. oh so nice looking sundresses, you should also consider that we're getting into Bathing Suit season! Yes, that's right. All those New Years resolutions towards losing weight to fit into that swim wear is starting to turn its head and wonder if you're ready for it. 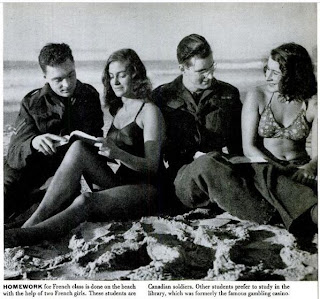 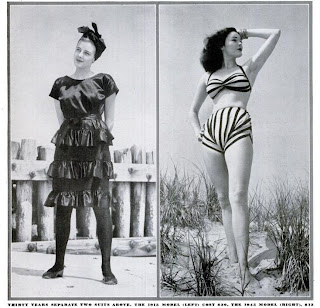 Just look at the early days of bathing suits. That's not a suit, it's a fucking nightgown. And really, there's nothing less sexy than Pajamas. Well, at least those have a sort of "easy access" going for themselves. It's more of a dress and really, if you're going to get all wet you might as well get all wet in a semi-white-ish dress.

But you can see the beginning stages of progression to a more socially acceptable world that will allow knees to be shown in public. KNEES! I know, how controversial! What next? Will they want to vote and be counted as people as well? Ha! I tell you, it'll be a cold day in hell before their place isn't behind a stove cooking a roast! 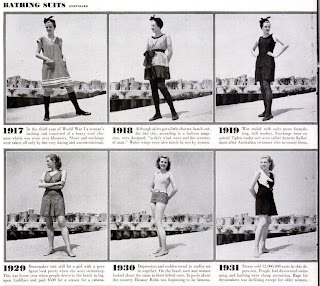 I especially think 1930 is pretty hot. I mean, look at that short skirt. But what the hell happened in 1931? It seems like it was two steps forward and then two steps back. What with it looking like a god damn dress. And not even a sundress. Minus points on that one. Not well played, missy!

Let's take a look at some other fashions of the era where people were fighting in wars and rationing cans and other such items for the soldiers fighting over seas in WWI. 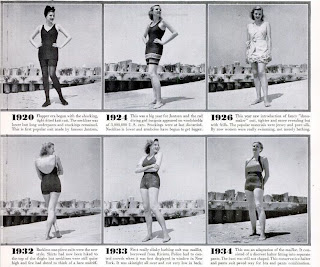 1924 is pretty sexy. I mean, maybe I just dig that whole look of clothing tight on the body. Oh man, did I just break the fourth wall of feminism and objectify someone from the 20's? Oh well, I guess I might as well go the full tilt. 1934 is pretty smoking as well, though I do dig strips. Oh how strips make anything look cool.

But what's up with the fashion of 1933? That's some massive camel knuckle going on in that one bathing suit. What line up of women who don't know the meaning of third, let alone first wave feminism..

Looks like 1936 is showing midriff. My, my. how naughty! Though it does sort of look like an older version of the sports bra. 1938 seems to be showing off her ass. My my my! So what's the next wave of pictures going to be? The last wave indeed!

Now compare those to the modern day idea of swimwear and you'll be surprised to see that.. well, it doesn't leave much to the imagination. 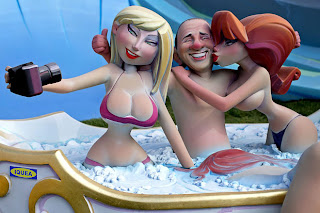 And while I guess I shouldn't be opposed to that, cause I do like to oogle the human body, I mean it does speak a lot to what can be sexy without having stuff flop out and what not, is all that I'm saying.

Just think, there was a time when someone would be too skinny. It go to a point where they would advertise ways for you to get those curves. Now that's something you really have to wonder. In today's high paced world of HFCS, it's not a problem to get some curves. You just have to watch out that you're getting some diabetes along with it.

How else are you going to get that cleavage that you'll need to be falling out of your suit and those hips that will make those guys turn. I mean, don't get me wrong. I love see some nice skin, don't even dare consider me a prude. I do like all sorts of skin revealing outfits and I know one thing for sure, the people in New Jersey are fucking prudes

Police in the US state of New Jersey have ordered a family to cover up their snow sculpture of the famous nude Venus de Milo after a neighbour complained.

Eliza Gonzalez sculpted the snow-woman with her son and daughter on her front lawn in Rahway following a snowstorm.

Many people praised their creation, but a police officer told them a neighbour had found it too risque, she said.

When given the option of covering the sculpture up or knocking it down, she dressed it in a bikini top and sarong.

"We didn't want to have any problem with the police so we covered it up," Ms Gonzalez told the AFP news agency.

But she now thinks the snowy Venus looks "more objectified and sexualised" than it did before the authorities intervened.

I have to say, my eyes would be gazing at that snow sculpture now more than they would if it was just a nude chunk of ice. You see, you've just objectified it by connecting it to a person instead of a physical form.

So as we approach the beach wear season, perhaps it's time to reflect on what you're going to sporting on the beach, as well as how much of a prude you'll feel like you want to be towards others. Myself? I'm in the stance that you can just wear whatever you want. I mean.. I'm not going to complain. Bazinga!

Bring on the spring outfits and don't skimp on those sundresses!
Posted by Booster Gold / Javier J. at 12:19 PM