When I was growing up I didn't eat a lot of McDonalds. While I would like to think that it was because my parents didn't want me to eat crap, it was most likely because they didn't want to spend money. Which I suppose is just as well since it didn't expose me to the horrors that is what you cal their food.

But unlike me, there is millions and millions of people who visit McDonalds on a daily basis. It is the #1 drive thru fast food chain after all. And even with that they do seem to find a way to change up the menu to keep it fresh... yeah, the word FRESH and McDonalds should probably never be uttered in the same sentence. 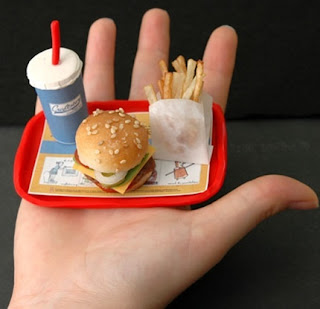 Take for example McDonalds introducing "mini-meals". Which are a burger with a small version of fries and soda for a much lower price. I took one look at this and thought to myself, that's a happy meal without the toy. No wonder they renamed it, it's no longer happy. Was it an issue that adults were getting the large portioned burgers that have meat stacked up to the sky because they were to ashamed to buy a "Happy Meal", but not too ashamed to be seen in a McDonalds drive-thru? I'm not sure I exactly get the appeal here.

Maybe it's just that the healthy options at McDonalds aren't all that healthy.. or at least not all that appealing. Why spend a couple of bucks on a salad when you can go to the market and get all those key items to make a salad at home for a fraction of the cost. Not to mention that a home made salad doesn't come with countless hidden calories and large fries 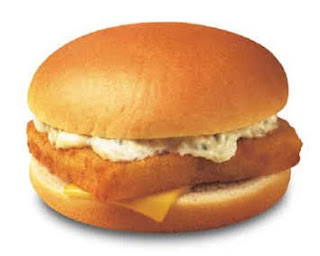 Then you have the religious band wagon jumping that they do every year around this time with the Fillet-o-Fish Friday deal. I'm sure I'm not the only one who has noticed that they crank those out during lent. Let me tell you one thing, if there's something that you SHOULD give up for lent, it should be fast food. But hey, what about those who are giving up better things like swearing or giving up lent itself? Yeah. Exactly.

I do sometimes wonder what a Fillet-o-Fish is. It's not like I go to a steak place and ask for a "slab-o-cow". You have to wonder what kind of fish you're getting and at what quality the meat it is. Then again, at $1.29, who wants to ask what exactly you're getting. Besides, people have better things to do with their time. They're at a fast food joint because it's fast.. right? It doesn't mean these people aren't crafty. Take for example the Mc:1030

I heard about this from a cashier at one of the local McDonald's. He said it's getting kind of a cult following in San Francisco.

1. Go to McD's right when they are transitioning from breakfast to lunch. 2. Order one of the remaining Egg McMuffins from the breakfast menu and also order a McDouble since the lunch menu is now open. 3. Take the egg and Canadian bacon from the Egg McMuffin and put it on the McDouble.

The guy at the register said people call it a Mc10:35 because that's pretty much the only time you can pull this off.

They're damn good when hungover!

I don't think it really can be called something as "SECRET MENU ITEM" consider it's not actually one thing to order and just an utterly vile looking combination made by the person ordering it who couldn't decide if they wanted breakfast or lunch. All I have to say is, finally a brunch menu for gigantic people. They sure have suffered a long time without an option to eat massive amounts of food... 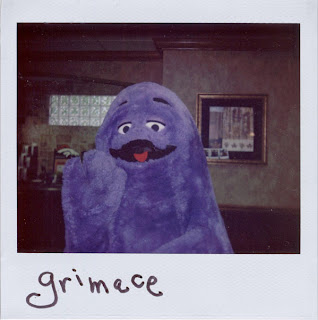 I have just needed an excuse to post this picture

And egg? On a burger??!? WHAT WHAT WHAT?!?! It's not like Fat Burger hasn't been doing this for ages now and the amount you're going to waste on a burger and an egg McMuffin at McDonalds could be better spent at Fat Burger for a better quality meal that is equally as fattening. At least Fat Burger is honest with their name.

This is also just a less healthy version of a standard sausage egg and cheese sandwich they have already on their breakfast menu. Oh yeah, I guess it also has ham. No big loss, why not just ask for some bacon while you're at it. Besides, you shouldn't encourage McDonalds, they'll probably do this for a limited amount of time and then never serve it again to create demand for it, just like the Shamrock Shake 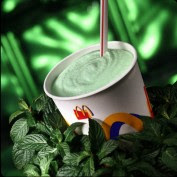 Which I have to say that MILK has a much better Shamrock shake on their menu year round. So don't believe Ronald's lies and fall in for the hype of getting something nasty like it.

I guess the only real question is who is ordering all this shitty food? I sure as hell am not. Bu

An obese mother in the US is trying to put on weight in order to become the world's fattest woman.

Donna Simpson, from New Jersey, weighs 273kg but told the Daily Mail newspaper she had her heart set on reaching her goal weight of 1000lb (450kg) in two years.

The 42-year-old already holds the title of the world's fattest mother after giving birth to her daughter in 2007 when she weighed 241kg.

"I'd love to be 1000lb ... it might be hard though, running after my daughter keeps my weight down," Ms Simpson told the Daily Mail.

Ms Simpson, who needs a mobility scooter to go shopping, eats huge amounts of junk food each week and tries to move as little as possible so she doesn't burn off as many calories.

"I do love cakes and sweet things, doughnuts are my favourite," she said.

Her 49-year-old partner Philippe — who she met on a dating site for plus-size people — was encouraging her to reach her goal, she said.

"I think he'd like it if I was bigger ... he's a real belly man and completely supports me," she said.

To put on enough weight, Ms Simpson will need to eat 12,000 calories a day, which is six times the recommended daily intake for women. 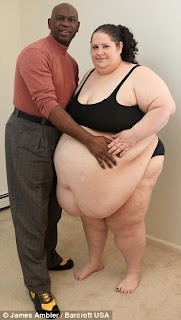 Well.. I guess everyone has to have some goals, right? Maybe I should just accept this and buy 200 shares of McDonalds stock right now. Ms Simpson can no longer walk more than 20ft before needing to sit down. Yeah, wouldn't want to burn calories by actually walking, right? That's why she goes to the shops in a mobility scooter. I wonder when she'll reach the weight limit for that.

"To fund the massive $750 weekly food shop, she runs a website where men pay her to watch her eat fast food." I think that's the most disturbing thing and yet the smartest thing. She's literally getting fatter on the money she makes while gaining more fat. I wonder if she'll probably get mercury poisoning from eating 70 big pieces of sushi 3-5 times a week. That poor fabric on her underwear 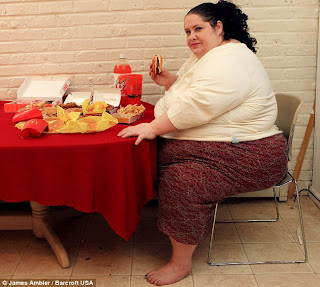 You know that feeling you get on your fingers after you eat potato chips, I get that feeling when I finished reading that article.. and as I type this blog post about McDonalds.. ugh, that's enough of that. I'll be in the shower scrubbing down with steel wool and Lysol.