I like to think of myself as a thrill seeker. While I wasn't too keen on roller coasters as a kid, I was constantly dragged onto them and so I grew up to enjoy them.. or at least forced to enjoy them. They were scary. They really had terrifying names. Stuff that's suppose to scare the shit out of you while you wait in the two hour line. It's all a mind game.

So that's why I'm a bit confused when I see that a new roller coaster is named after someone who couldn't turn right. Then again, anyone in the South knows about him. Rednecks rejoice! Yes, that's right. Nascar legend Dale Ernhardt has gotten himself a roller coaster.

The Intimidator, befitting the man who inspired it, is the fastest, tallest, and longest roller coaster in the Southeast. The snaking steel beast, more than a mile long and named for the late Dale Earnhardt, is 232 feet high and drops 211 feet in one go. Riders at the Carowinds theme park hit 80 miles per hour in cars made to look like the #3 Chevy Monte Carlo, only with the addition of stadium seating that ensures everyone gets a clear view – something we're pretty sure Dale's NASCAR Chevy didn't have.

You folks better watch out for that 4th turn, it's a killer!

The real question now is if this will make Carowinds a highly attractive destination site?
No.
Nothing will ever accomplish that task.
Carowinds is really the worst theme park you could ever go to.

I'm not sure what makes this coaster all that much Dale Earnhardt inspired. Does it have insufficient safety equipment? 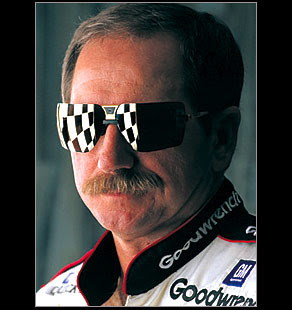 I got a joke. What do Dale Earnhardt and Pink Floyd have in common?
Their last big hit was The Wall.

What do Dale Earnhardt and obese dancers have in common?
Their belts break at the worst possible time. 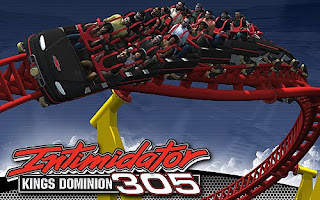 Either way, you know where the red neck crowd is going to be... in line waiting for a Dale Earnhardt roller coaster. Oh man! Bring on the fun! You must be this intoxicated to enjoy this ride.

Just imagine riding this roller coaster on weed. I'm sure it'll seriously rule. I mean, perhaps you'd be straight up giggling the whole ride and then you'll have to deal with the whole theme park being baked and the lines and families would totally kill your buzz. But you have to at least try it once, you know. 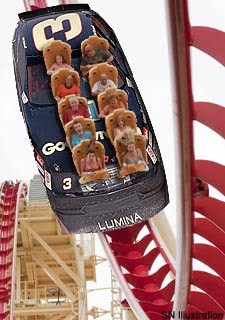 You're probably better off bringing a one-hitter/protopipe & smoke a bowl in a little nook away from everybody. Then go stand in line. That'll make that whole experience a whole lot easier. Or perhaps just go on a Wednesday morning. Only stoners will be there at that time anyway. Then again, every theme/amusement park I have been to is 70% white trash high school kids and a handful of families. The worst thing that happens is some little punk asks you to sell him something and you make some cash on the side.

I wonder if acid at an amusement park would be awesome or utterly horrifying? Makes you sort of want to try it out just to see if you could hold it together. Especially under a hot sun. Did I make a joke about turning right yet? Oh, I guess I did.

Well, I've crashed this topic into the wall. What a stupid roller coaster. I'm going to go ride Batman and Superman the ride now.
Posted by Booster Gold / Javier J. at 4:40 PM