Who Markets The Watchmen

Who Markets The Watchmen

I have my reservations on the Watchmen Prequels, as you may have noticed in previous post. But now that I'm seeing DC's attempt at creating "Before Watchmen" merchandise, I can't stop from laughing.

Because really, just look at this thing.. You can tell it's from the prequel because of the jaunty spring in Rorschach's step. I'm a little confused why he's walking over a picket sign, I didn't think he was protesting back then.

"Streaks on the china! Never mattered before. Who cared? When you drop kicked your jacket, as you came through the door, no one glared! But sometimes things get turned around and NO ONE SPAAAARED! All hands look out beloooow, there's a change in the status quoo-ooo-oo. Gonna need all the help that WE CAN GET! According to our new arrival, life is more than mere survival! We just might live the﻿ good life yet."

The worse thing about that statue is how much it looks just like.... Why yes, it appears that haters are indeed going to hate.

The thing that worries me most about this project isn't the Leo hater gonna hate pose, but that the buzz in the store I go to and quite a few others is "Thank god JMS is on one of these." My god. What the fuck happened to the man.

Then after all that I hear people saying things like "ugh Darwyn Cooke? Why couldn't they get Geoff Johns to write this!?"

Then again, people say this shit all the time about other books, but then again I'm desensitized to it all by now. But hey, if you're wondering why he isn't involved with this, it's rather simple - It's because Watchmen wasn't done during the Silver age. Maybe they wouldn't allow him to replace Doc Manhattan with Allen Adam, the real Doc Manhattan the fans demanded back.

Anyhow, here's some Darwyn Cooke art for the minutemen. 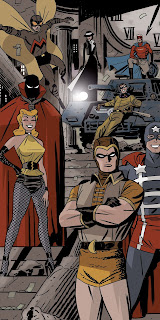 If there's a Watchmen book that's going to be any good, it has to be me putting my money on that one. Do you know why? Because the Minutemen weren't developed nearly as much as the rest of the cast, so Cooke is going to have a lot of room to spread his wings there.

The worse though. Man, I can't decide. I feel as if Ozymadias will probably be bad because I never really got him as a character to begin with.

Or maybe it's going to be Rorschach. Mostly because the chief complaint about these books being made seems to be that they're not adding anything to the story, and Rorschach is probably the character who, more than any other, has nothing left to say.

In Watchmen we saw his arc be pretty much shown completely from start to finish. Which means that "Before Watchmen: Rorschach" is going to consist of nothing but fight scenes to pander to everyone who found him super-badass and missed the point of him being a psycho.

None of those could be worse than Dr. Manhattan though. Mainly because JMS will just jump to telling us the secret history of Manhattan's origin, thus ruining the whole thing for everyone.

Oh yeah, and if you people are still on the fence on if this good or bad, you should probably read this article that goes into the major arguments and rebuts the most stupid ones.
Posted by Booster Gold / Javier J. at 4:00 PM