With my birthday just a few days away, what better topic to discuss than alcohol. You know, since I'm entering age 32 and I really do feel the need to ramp up my crushing alcoholism problem. I mean, I have all this booze around and yet there's still hours in the day when I'm walking without a stumble.

What is with that?!

Anyhow, let's focus on the name of the game.. or a specific term. BAR FLY. I mean, it's not often that I wonder where a term or phrase came from. But apparently the whole Bar Fly phrase is actually pretty accurate. For you see, rejected male fruit flies will also hit the sauce to drown their sorrows.

Scientists at the University of California, San Francisco discovered that rejected male flies have a tiny neuropeptide F molecule in their brain that pushes them to drink far more than their sexually satisfied counterparts.

The levels of the molecule were higher in sexually satisfied males than in those who got no sex, leading scientists to speculate that their work could shed light on brain mechanisms behind human addiction.

A similar human molecule -- neuropeptide Y -- may also link social triggers to behaviors such as heavy drinking and drug abuse, according to the study published in Science journal.

"If neuropeptide Y turns out to be the transducer between the state of the psyche and the drive to abuse alcohol and drugs, one could develop therapies to inhibit neuropeptide Y receptors," said lead researcher Ulrike Heberlein, a professor of anatomy and neurology at UCSF.

She said clinical trials were underway to determine whether neuropeptide Y can alleviate anxiety and other mood disorders as well as obesity.

For the experiment, male fruit flies were placed in a container with females flies, including both virgins and some that had already mated. 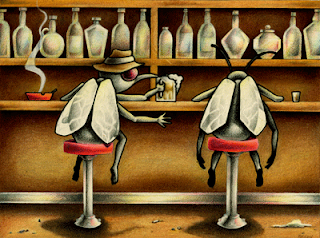 Virgin females were receptive to courting males and readily mated, but females flies who had mated lost interest in sex for a time because of sex peptide, a substance that males inject with sperm during the encounter.

Rejected males then stopped trying to mate, even when placed in the same cage as virgin flies.

But when they were placed by themselves in another container that had two straws -- one containing plain food and the other containing food with 15 percent alcohol -- the rejected males binged on the alcohol.

The scientists said the behavior was predicted by the levels of neuropeptide F in their brains.

"It's a switch that represents the level of reward in the brain and translates it into reward-seeking behavior," said lead author Galit Shohat-Ophir of the Howard Hughes Medical Institute Janelia Farm Research Center in Virginia. Rejected flies had lower levels of neuropeptide F and sought an alternative reward through intoxication.

The scientists found that they could induce the same behaviors in the flies by genetically manipulating the levels of neuropeptide F in their brains.

Activating neuropeptide F production in the brains of virgin male flies caused them to behave as though they were sexually satisfied, and thus they were less keen to drink.

And lowering the levels of the molecule in sexually satisfied flies made them behave as though they were rejected, inciting them to drink more.

So you see, it's not some crushing alcoholism via genetics. It's just that I've gotten far too many rejections in my life and thus, I want to drink.. and drink a lot. See, I blame you, High School girls who never gave me a chance. I'm talking about you Michelle and Marisol.. and to some degree, you Jennifer!

No wait, I'm not sure if I even knew a Jennifer in High School, but I know I've been fucked over (and not in the good way) by one too many Jennifer's in my day and I'm sure the amount of them that rejected me have totally destroyed years of productivity from my liver. But yes.. bar flies.. are like bar flies.. 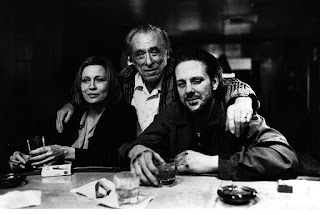 Not that bar fly. Anyhow, it's interesting that the rejection is what kicks it off. It's a sort of defense to just start consuming alcohol to numb that rejection.

You have to wonder though. I mean, your a fly and you go to sleep next to a butterfly only to wake up with a moth around your arm. Yup, that's the type of night that you've had if you're consuming a thimble full of alcohol.

Then again, that's not going to drive you to drink because it's not rejection. But it will drive you to have beer goggles. Which oddly enough, studies have shown that beer goggles effect women more so than they effect men. 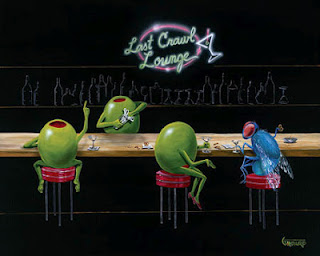 Yes! That's actually true! You see, in a shocking turn of events, it seems that beer goggles have more of an effect on women than men.

It's a phenomenon most often associated with the more than mildly inebriated male. But it seems that it is in fact women who are more likely to be fooled by their 'beer goggles'.

Scientist have worked out why membes of the opposite sex can seem more attractive after a few drinks - and they found that women's judgment was more greatly clouded by alcohol.

Researchers at London's Roehampton University asked more than 100 men and women to rate pairs of faces. Some did the test while drinking a strong vodka and tonic. Others were given a similar-tasting non-alcoholic drink or orange squash.

One of the tests involved looking at faces and stating whether they thought each one was symmetrical or non-symmetrical. Scientist have long known symmetry to be tied to attraction, with a face in which one half mirrors the other seen as a sign of a good genes and good health.

Concluding that women drinkers were particularly bad at this task.You

You hear that, guys? It seems that even you or I can get laid with the power of alcohol now. I mean, sure it'll be ethically wrong to take advantage of someone who has consumed alcohol and has impaired their judgment enough to find you attractive.

But on the flip side, how else are you going to get laid? What do you want to do? Get rejected and start drinking? See, it's either you have them get wasted and find you attractive or they soberly reject you and you get shit faced.

Man, it really is a man vs woman world out there after all.
Posted by Booster Gold / Javier J. at 3:02 PM