So the biggest stink out of Coachella wasn't that Radiohead played and rocked out, as I have heard the bootleg tape of at least three times already. But apparently the biggest shit was that Tupac came back from the dead...

Well, in holographic form. Which I guess is as close to a reality as you'll ever get to Tupac coming back from the dead.

Though with everyone henning and hawing, has anyone thought to mention yet that it's actually a volumetric projection not a hologram. You actually have to have the physical object to make a hologram and at the moment, they haven't reanimated Tupac's corpse yet - But that's also because it'll take till 2095 before Tupac will rise from the grave. For now he's just chillin in Serbia.

But let's pretend that he's actually dead and this is the closes you'll get, how the fuck did they think "You mang, let's make a holographic version of Tupac!"? 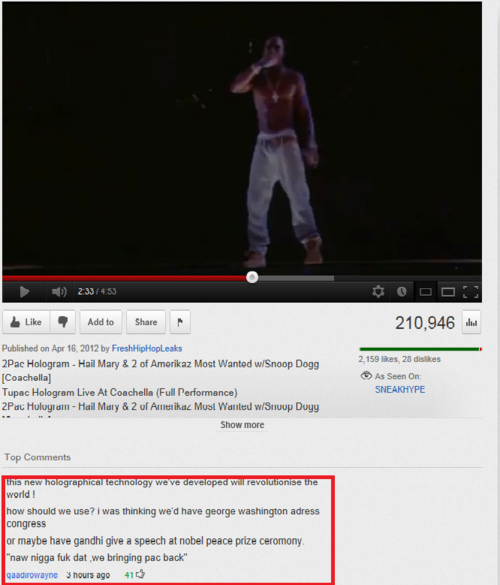 I love that. I mean.. it's only fitting that I actually post my favorite Tupac video to post on my blog whenever someone dies.

I think at this point I owe a lot of royalties on that shit now. If anything, those two videos sort of show that rappers these days are all a bunch of fucking pussy ass bitches when compared to those who were actually hard core in the day. And even them.. what the fuck is Ice Cube and Ice T doing these days... yeah, that's what I thought.

It does raise an interesting question - What happens after you die with your likeness? I'm sure as shit going to make sure that my last will and testament reads: No Holograms. I mean, can you really picture that sort of shit? "Imagine our low prices. It's easy if you try!" -Undead John Lennon, licensed spokesgram for Wal-Mart.

Where will Tupac show up next? You to can book Tupac to sing at your wedding and barmitzah! 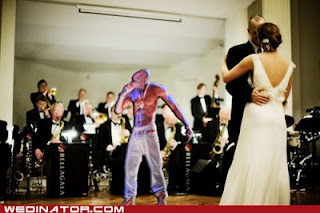 I'm just waiting for the Supreme court ruling. March 2014 - In a 5-4 decision, the Supreme Court today sided with the Westboro Baptist Church in ruling that the dead had no Constitutional expectation of privacy and their holographic images could legally be projected outside their own funerals loudly decrying "their own God-damned faggot loving ways that caused their deserved deaths".

Then again, while death is certain, it's never a free pass to making sure your likeness will not be selling terrible shit anyway as it has been done with in the past

So really, it shouldn't be a surprise when Tupac is headlining tours with that digital anime chick over at staples center.. 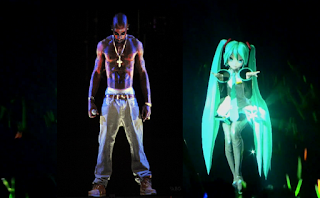 Just look at that hologram anime dancer. It's going to be real "cool" when anatomically impossible 3D simulacrae become the new beauty standard for women..

Any how. Here's a random picture of him in Ghost Busters. HAHAHAHAHHA. get it..

Okay, I'm bored with this topic now as I'm sure you are as well. Maybe I'm just projecting...
Posted by Booster Gold / Javier J. at 11:25 AM