The Stand Your Ground Defense Rest

The Stand Your Ground Defense Rest

Fun Fact: George Zimmerman will never, ever be arrested.

Prove me wrong, society. Prove me fucking wrong. But until I'm a liar, society is going to prove to me that everything they do is fucking pussy shit and they won't bother with this. I mean, he may "fall" down some stairs, and I guess that's something in itself, but he won't be prosecuted to anything above a slap on the wrist.. if even that.

They trying to suggest that "Shaken Baby Syndrome" will be used in defense of Trayvon Martin's killer. I hold my hand to God (that doesn't exist) that I'm not making this shit up.


Hal Uhrig, a lawyer and former Gainesville, Florida, police officer who recently joined Zimmerman's defense team, cited in a TV interview the brain damage that can seriously injure or kill an infant.

His point, which has been made before, was that Zimmerman contends he shot Martin in self defense and feared for his life after the 17-year-old attacked him and began pounding his head into the concrete pavement of a gated community on a rainy evening in Sanford on February 26.

But Uhrig's choice of words, and use of a recognized sign of child abuse to defend a 28-year-old man who killed a kid, seemed likely to raise more than just a few eyebrows.

"We're familiar with the Shaken Baby Syndrome," said Uhrig on the CBS This Morning program. "You shake a baby, the brain shakes around inside the skull. You can die when someone's pounding your head into the ground."

Apart from saying his client suffered a broken nose, Uhrig did not elaborate on the extent of any injuries Zimmerman actually suffered. But characteristic injuries associated with SBS, as Shaken Baby Syndrome is known, include bleeding in the brain. There are often no visible external signs such injuries have occurred.

George Zimmerman is literally a shaken baby. For fuck's sake, this is beyond enraging. This is just flat out sad. I can't even get disappointed anymore about any of this. They aren't even trying to make a defense for this whole incident. I had to shoot him, yer honor. You see I have the brain of an infant and a soft pliable skull and well, he jostled me.

Stay tuned next week for our "Words can hit as hard as a fist" defense. Or maybe the Zimmerman's defense team will next claim that their client was possessed by a racist ghost. The "Bag of Bones" defense. 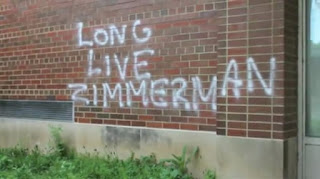 What next, George Zimmerman is going to show us on live national television that he could not have killed Trayvon Martin by holding a gun in his hands and attempting to pull the trigger, but the gun will slip out of his hands and he'll juggle it while making "WOOP WOOP WOOP" sounds like a Three Stooges gag.

"Your honor, I am simply too Vaudevillian to have done what I am accused of."
*Doffs top hat and Charlestons offstage*

Because seriously, look at that tagging on the wall proclaiming that Long Live Zimmerman. Some idiot college kid spray painting a building is going to be investigated and prosecuted more quickly and more effectively than a murder of a child. And really, that's just fucking sad. Goddamn America.

Especially since the state attorney decided against sending Martin case to grand jury, charging zimmerman now completely up to her

I mean, I was seriously not expecting this. Or more accurately I was expecting it but was expecting it to be way more subtle about it. Now in the absence of a federal case which is about guaranteed to be kept far the fuck away from by the holder DOJ Zimmerman actually has a chance to duck the charge entirely.

So this basically means that there may not be any federal charges at all. How exactly can that happen? The simple answer - This is America. And in America now the federal case hinges on the Department of Justice, run by Obama appointee Eric Holder, seeing the rank incompetence of the Sanford police and Florida courts and stepping in to do the job that locals/stateys SHOULD have done, but didn't and apparently aren't going to.

And the latest? Well, the fucker has come out and is showing his ass to the world with THE REAL GEORGE ZIMMERMAN DOT COM

Yes, it is actually Zimmerman's website. And oh my god, he posted a picture of the long live Zimmerman graffiti on his own website. 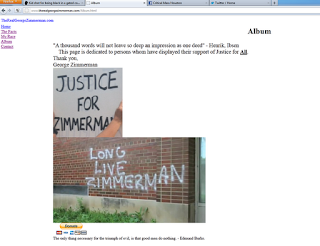 Then he goes on about is job attainability. "My forced inability to maintain employment" Which is weird that people fire you when you are a rent a cop who goes nuts and beats up people. Even weirder that they wont hire you after you execute a kid in the street. Who would have thunk it? Forced inability indeed. But hey, finally "randomly killing black people" has become a business model for private citizens, I wonder when he'll do an IPO.

But what really got me from that website is that fucking American Flag template background. 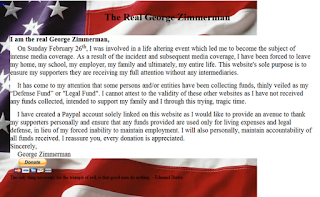 Then the Zimmerna's family sent a letter to Holder about this.

"Strangely enough this case has a lot of parallels to those of Harper Lee’s ‘To Kill a Mockingbird,’” the letter to Attorney General Holder read. “George Zimmerman has been treated much like Tom Robinson was, chastised for not being the right (or wrong) color and found guilty based on race factors.

“You have the opportunity to act as Atticus [Finch] and do the right thing. Your boss would refer to this as a ‘teachable moment.’”

What the fucking fuck fuck FUCK!

Can someone just fucking kill Zimmerman already? But again, I shouldn't even suggest that as he'd be a martyr and the cycle will simply continue. Then again, neither him nor his demise are that relevant to the cycle.

The family member believes the reason Holder hasn't made those arrests is because he, like the members of the New Black Panther, is black.

“I am writing you to ask you why, when the law of the land is crystal clear, is your office not arresting the New Black Panthers for hate crimes?”


“I would surmise that, based on your own definition of a hate crime, you have chosen not to arrest these individuals based solely on your race,”

Arrest this fucker at once. UGH!

Then Zimmerman's lawyer, who totally knew that Zimmerman had badly injured the back of his head, never met him in person and they only talked over the phone. George Zimmerman could have gotten away with executing a kid in the street, instead he made up an insane story about getting his head bashed in, started a website where he posted a picture of a vandalized black culture center, spoke to Sean Hannity, and then hired a lawyer equivalent to a public defender.

"Him setting up his own web site is fine," Sonner said. "I wish he would have told me.” HA! It's pretty clear to me now that George Zimmerman is living in a discarded Twilight Zone episode where he can't go to prison no matter how badly he sabotages himself.

That episode is called White Privilege.
Posted by Booster Gold / Javier J. at 11:30 AM