While I'm not one to yap on about sports. Certainly not NFL related, I feel it's well worth talking about the incident that happened last night during Monday Night Football.

The simple back story to know is that the NFL locked out the officials, which are part of their own union, just like the players. But the NFL Referee Association's contract with the NFL expired last season and the two haven't been able to come to terms. The NFL decided to be mature about this and locked them out and hired scabs.

What were the terms that the NFL couldn't agree on? Well, first off the NFL wants to make a certain number of officials work full time and exclusively for the league. That may sound like a nice thing, but currently a lot of them do this job solely on the side and 90% of them are not willing to go full on exclusive.

They also want to add three new officiating crews worth of officials. Mainly to replace the aging officials. They also have issues with the cash flow, the point that the NFLRA really is fighting for. The NFL said it has offered a seven year contract with annual pay raises of 5-7% based on experience levels. The NFLRA said that this contract would actually result in smaller pay raises than what would have been provided under the expired agreement. Most of all, the NFL also wants to get rid of the officials' pension plans and replace them with 401(k) plans. The NFLRA said this would represent a 40% reduction in the league's retirement contribution.

So with the two not being able to see eye to eye, they locked them out and hired scabs to take their place. At best you have high school coaches calling the games and that came to a boil last night with the yelling your husband and boyfriend is screaming about. It's pretty clear that every team was going to have their moment where the scab refs officially affected the result of the game, but it seemed like one of the fan favorite teams, the Green Bay Packers, losing yesterday on a very questionable call was one of those breaking points.

What happened was that an interception in the end zone became a touch down even though the guy intercepting it had a clear possession of it going down. This wouldn't be too bad, but on the replay/questioning the play, the had ref also called it good. And so even after the reviewing of the play, it was done.

If you ask me, if it takes the Packers having a win stolen from them to end the lockout, then I'm more than happy about it. In fact, if it takes the Packers losing every game this year, it'll be a worthy sacrifice for justice to be done.You can't blame the Hawks or the Packers for the game. On the previous drive, the Packers got away with a complete phantom DPI that allowed them to go all the way down field for the go ahead. Not to mention that on the last series on the first play, the Packers were blatantly off sides. You can't really fault any of them.

This is completely on the heads of the officials and the NFL for refusing to pay the real refs. I would prefer if refs were just taken out of the game all together, as they really don't add much that a video camera couldn't tell you. The Seahawks deserved to win that game just as bad as the Packers did. Only the call that the Packers got screwed out of is the only one anyone is paying attention to.


Truth be told, I'm sort of disappointed that the ending exist because now it's all anyone will talk about - instead of the horrible calls that were being tossed out through the entire game. People will scream bloody murder but the owners will keep raking in their cash and not giving a single fuck. I would be surprised if anything changes as beating the union out of pensions is more important to them than any amount of bad PR. 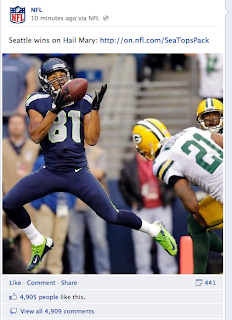 Yup, seems like they'll just sweep it all under the rug and not give a fuck about it - as long as a union is busted up. And for the love of god, once again, all the people who are upset at the Seahawks fans, check yourself. It's not their fault that a bad call went in their way. If it went for your favorite team, then you wouldn't be complaining much.