Tell Me WHO Are You?

Tell Me WHO Are You?

Today, at 7:10 GMT time, it gets all Timey Whimey and The Doctor returns for a much anticipated new season of Doctor Who. Today's episode is Asylum of the Daleks and it features all the different versions of the Daleks that have appeared over the years on Doctor Who.

After that, there's four more episodes that currently have confirmed titles and authors.

Dinosaurs on a Spaceship (Chris Chibnall): Hmmmm, I wonder what this one has in it...

A Town Called Mercy (Toby Whithouse): A western that was shot in Spain, featuring that dude with a weird cybernetic eyepatch thing from previous trailers.

The Power of Three (Also Chris Chibnall): Wikipedia's saying it's going to be an invasion of Earth-style story. Not much else is really known.

The Angels Take Manhatten (The Moff): Desperately hoping that this one's a Muppets crossover. This is yet again going to be Amy and Rory's last episode. I'm guessing that it's going to stick this time.

But beyond that, we know very little information about the second half of the series. None of these are really really confirmed. But they're all as close as can be to that as possible:

Neil Gaiman's apparently coming back to write a Cybermen episode. Considering his past contributions, this sounds really amazing. Gatiss is writing an episode featuring David Warner as an ICE LORD. They're back, baby! Oh man, bust out some nostalgia. Then there's an episode that's been described as "Image of the Fendahl meets Quatermass." Which sounds really promising! Some mention of another story centering around the Eye of Harmony. Will it be a fanwanking bullshit or a potentially good story in the offing? We don't have a Tardis, so we'll just have to wait and see.

Other things that we need to look out for is an upcoming stylistic change in the show. Both with the new theme, a new opening and... oh yeah. Her 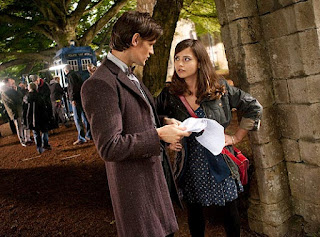 All in all, a little spoilers filled, but a very brief run down on what is happening in Doctor Who starting today!