Ever since I saw This is Spinal Tap, I've always wanted to say "Hello Cleveland"

Though these days, there's not much reason to rejoice when you are in Cleveland. All you hear is the collective sigh of everyone realizing that LeBron James telling them "FUCK YOU, CLEVELAND!

It's not that I'm that much of a die hard fan of Basketball these days anyway, but as a journalist this whole ESPN/LeBron special was about as disgusting as it gets. I realize they're not exactly huge on journalistic integrity, but Jesus fuck. Good ol' ESPN: Enabling Sports Players' Narcissism since 1979. Really though, they don't even pretend to be journalists anymore. Just like MTV doesn't pretend to be about music anymore.

The most disgusting thing to me about the decision was that it got put on prime time television. Once you get past the glitz and glamor of it being "LeBron's choice" you realize exactly how pompous it was. Even if he donated the proceeds to charity, it looked so arrogant and there's no question that it hurt his image. As if it's not already shitty for the Cavs now. Cleveland was already a city where NBA players didn't want to play, even with LeBron there. Take him away and I can only imagine the dreadful free agents they'll overpay for and not make the playoffs with. Yeah, it could be worse. You could be Buffalo and just have given up a long time ago. Like, HOPE isn't even in their vocabulary anymore. But still, having a one hour special to rub it in your hometown's face that you were leaving... that's pretty damn classless.

I don't blame the people of Cleveland to hate him. I don't think it's even that they're upset with him leaving, more so on HOW he went about saying goodbye to the team. He didn't need a 60 minute special to announce that shit. If anything, the announcment of the 60 minute special gave them a false sense of hope that he might actually stay in Cleveland. Instead he just rubs it in their face that he's out of there. 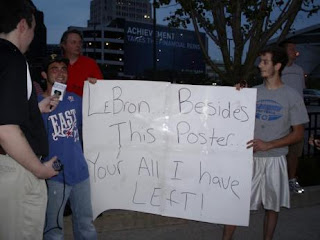 I really can't think of a bigger villain in the NBA right now than LeBron. I don't know how anyone could possibly like him after this bullshit, well you HEAT fans are the exception. Just look at some of these images and the reactions of fans of seven years. But still, the Heat will still suck next season. Bosh is overrated, D-Wade is injury prone, and LeBron was the best on a shit ass team.

Just look at the ego of this douche;

Reporter: So Lebron do you feel like you were in a lose-lose situation, no matter where you went there would be a critisicm

He really needs media training. I don't even think he is trying to be a douche here, to be honest. But you can't help but feel like he's the biggest turd of a person in history. I just wonder who the target audience for what was the biggest circle jerk in NBA history. Then the next day they basically had a victory rally for signing contracts.

I bet you're wondering what the point of a salary cap is if you can afford to pay 3 guys the maximum salary under it? Well, essentially you have no bench at that point. The team will likely not be very balanced or deep and it remains to be seen just how well the Heat will do even with 3 top 10 players.

While it's true that the top 5 guys in basketball play a majority of the game anyway, you're pretty much forced to put them in for a good 45 minutes a nigh and it would be fucking stupid to do so. That is the biggest flaw in this super dream team. A team that plays 10+ guys, presses, and runs the whole game will kill them. 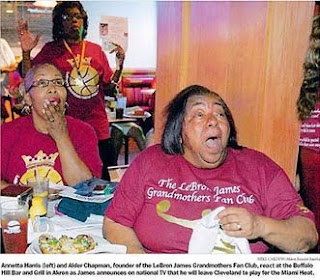 Besides that, who is their shut down defender that's going to stop the other team's star from scoring? I know LeBron is a pretty good defender, but Wade and Bosh aren't exactly Kobe and Howard on defense. I mean, is this team going to go all Golden State and just try to outscore the other team?

I think the best part of this will be if the whole thing blows up because 3 superstars and 9 superscrubs isn't a recipe for Championships and it all ends up like Kobe/Shaq minus the rings. If anything, having that many superstars on one team dilutes their reach. It really does become a case of who's stealing the spotlight today and it does lead to conflict. Those B-Ball stars are all about making it to the ESPN highlight reel.

Chicago really would have been the best place to go as far as "winning" championships go, as they'll have more depth than Miami. Now he's basically a co-captain with Wade and if any of the 3 go down with injury it's going to be a real bad situation.

As it stands now, Chicago could fly under the radar and really stick it to Miami. Even Boston knows how to turn it up come playoff time with their experience. The pressure on James in Miami is going to be ten times what it was in Cleveland. Especially after this 60 minute jerking off in front of ESPN's cameras. So why didn't he pick another team? This should tell you about King James..

Chris Broussard said on ESPN Friday that a big reason that LeBron James didn't sign with the Bulls is that they didn't offer enough perks for LeBron's family and friends. One of LeBron's buddies was hired by the Cavaliers and he wanted his entourage to be able to travel on the Bulls' tab, but the team, according to Broussard, said 'we didn't do that for Michael Jordan, so we're not doing it for you.'

Ha! Well, I guess he was looking after his old friends. Though you just have to wonder for how long. It's only a matter of time before LeBron has finally thrown his Akron friends out the window to just party with his Miami crew. Then those Akron boys will sign a book deal that reveals all the bullshit LeBron's done in the last few months.

Then you have Florida stroking itself off, like in this article.


We are the kingdom now.

Miami is the capital of basketball.

South Florida is the epicenter of American sports.

Uh, it's Miami. The same Miami that can't sell out a playoff game. People severely overstate Miami's significance as a sporting city. Jesus could fight Saan for the UFC Heavyweight Title with no admission charged and Miami would still only fill 2/3rds of the seats. 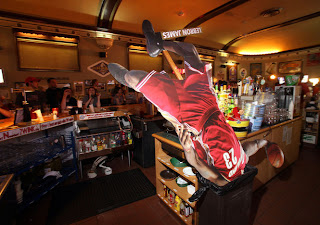 Their teams are awful. The Dolphins are getting better, but still nothing worth noting and certainly not on anyone's radar. The Hurricanes are slowly getting back to being semi-respectable, and the Marlins are completely irrelevant. Should I even mention the Panthers? Half of the people at the rally didn't realize they had a team there till last night.

Over all, I look forward to seeing the Celtics eliminate them in the conference finales next year.
Posted by Booster Gold / Javier J. at 7:00 AM

Biggest turd in history? No, pretty sure that was Stalin.

People need to calm down. It's just sport. HOnestly. It's not like the top cancer researcher in the world has decided to go and develop biological weapons for the Russians. It doesn't really add or detract anything to the human race. It's a game. That's it. It's illogical to care so much.

He was on one team, and now he's on another. Oh my god, let it dominate international news for two weeks, or however long it's been.

Really, there are more important things in life.