The Gulf Coast Is a Giant Dead Zone

The Gulf Coast Is a Giant Dead Zone

...and it's not for the obvious reason you are thinking. It's not because BP is flowing millions of barrels of oil into it daily, but it's because of a simple thing we grow on farms. Corn. Corn is the culprit behind it all.

For the hundreds of thousands of people in the Gulf of Mexico who depend on commercial and sport fishing, directly and indirectly, the assault on sea life from the BP oil disaster has been a serious blow. But it's hardly unfamiliar.

That's because even before the spill, up to 8,000 square miles of gulf waters would turn every year into dead zones—vast areas of the coast so depleted of oxygen that shrimp, crabs and other marine animals could no longer live.

Now scientists fear the BP spill will make a bad situation worse. Despite blithe predictions that the gulf fishing industry will bounce back like Alaska's after the Exxon Valdez disaster, the already-expanding Gulf Dead Zone presents a uniquely dangerous scenario that many fear poses a long-term threat to ocean life.

First noted by scientists in the 1960s, dead zones are formed when huge amounts of nutrients—such as those found in agricultural fertilizers, municipal sewage and other wastes—overload the water, leading to explosive algae growth that ultimately robs oxygen from marine life below.

A 2008 study found more than 400 dead zones around the world, and the Gulf of Mexico's is one of the largest. Snaking along the Louisiana and Texas coasts, the expanding Gulf Dead Zone has drastically reduced seafood stocks and pushed fishers further out to sea.

The primary culprit? Nitrate-laced runoff from agricultural operations along the Mississippi River, which eventually drain into gulf waters. One study found that 51 percent of the Mississippi's nitrogen load was from commercial fertilizer, with livestock manure, human sewage and runoff from other crops contributing to the mix.

Fall weather brings cooling air and churning waters that dampen algae growth, but scientists are now seeing a "legacy" effect where lingering decomposed organic matter continues to steal away oxygen. This means that even if nitrate levels hold steady or decline, past pollution can still cause dead zones to expand in the future.

Now add the BP disaster. Gushing oil is the most immediate threat to marine life, but scientists see another looming danger: methane, which BP itself has estimated constitutes 40 percent of what's flooding out of the Deepwater Horizon drill site.

Last week, John Kessler of Texas A&M University measured methane levels at 35 different locations near and far from the BP disaster, and he found levels of methane in deep ocean waters near the Deepwater Horizon oil spill are 10,000 to 100,000 times higher than normal, and in some very hot spots, Kessler said, "we saw them approaching 1 million times above what would be normal."

What's wrong with methane? Like nitrates, it stimulates the growth of shallow-water life—in this case, feeding microbes—that sucks up ocean oxygen and kills off deeper-water animals like seabed shellfish. In some places, Kessler's team found "depletions [of oxygen] up to 30 percent."

While BP's spilled oil has already killed much marine life, a growing threat to the health of gulf waters comes from another energy source further up the Mississippi River: ethanol.

Most U.S. ethanol comes from corn; in fact, ethanol accounts for more than a third of U.S. corn production. And corn is one of the worst crops when it comes to dead zone-causing pollution runoff, because it depends on higher concentrations of nitrates to grow.

That problem will only grow worse as the U.S. ramps up production of ethanol fuel. The Energy Independence and Security Act of 2007 set a goal of the U.S. using 36 billion gallons of renewable fuels by 2022, including 15 billion gallons of corn-based ethanol—triple the current amount. President Obama affirmed the country's commitment to ethanol in a directive last year.

The result would be "a disaster for the Gulf of Mexico," says Simon Donner, a geographer at the University of British Columbia. A study that Donner wrote along with scientist Chris Kucharik, which was published by the National Academy of Sciences on March 18, 2008, showed that:

"[S]caling up corn production to meet the 15-billion-gallon goal would increase nitrogen loading in the Dead Zone by 10-18 percent. This would boost nitrogen levels to twice the level recommended by the Mississippi Basin/Gulf of Mexico Water Nutrient Task Force, a coalition of federal, state, and tribal agencies that has monitored the Dead Zone since 1997. The task force says a 30 percent reduction of nitrogen runoff is needed if the Dead Zone is to shrink."

Groups like the American Farmland Trust are pushing for solutions: Their Best Management Practices contest pays farmers to reduce fertilizer use and therefore nitrate runoff. But these are still small-scale answers to a national problem that demands a federal response.

Until Washington comes up with a plan to address the growing Gulf Dead Zones, thousands of square miles of ocean waters—and the thousands of families who depend on them for a living—face a grim future, long after news headlines of the BP disaster fade away.

Yes, you should all be thanking BP as they are truly international heroes for bringing attention to the grossly unsustainable farming practices that most countries engage in, which have already doomed much of the ocean. Their spill? Won't kill very much because everything that lived in the gulf was already dead.

Ha! How do you like that for irony. Though, if their spill actually causes a deathly toxic death fart that kills all humanity, that's another story. But you could read more about that in another blog post of mine. 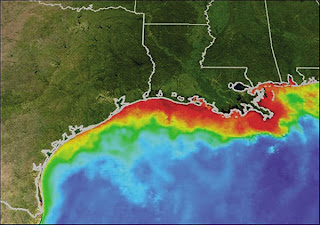 Biomass is terrible for biofuels. Why aren't there any decent lipid producing algaes yet? Oh right, yeah. Because the only place which does any scientific research for the US government is NASA. Then there's always all the university pharmaceutical research that the US government pays for.

Guess what Vegans: getting rid of meat won't do anything about this. Corn, soy, and human waste are causing most of the damage. While I'm going to go all rage against the machine against corn in a bit, it should be worth noting that if we stop growing so much corn and soy, human waste will always be an issue due to the size of the human populations. So I guess the only real solution here is to kill your self. 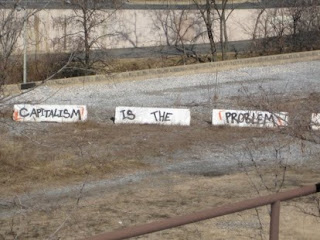 Yes, getting rid of mass beef would mean you don't have to feed them mass amounts of corn, but the only reason there is so much corn in the gulf is because of massive government subsidies for great plains agriculture in the first place. That's all thanks to capitalism at work.

You see government subsidies that were demanded by big agriculture, which would exist in those states even without the subsidies and the tariffs that give them preference. --The Omnivores Dillemma


Government farm programs, once designed to limit production and support prices (and therefore farmers), were quietly rejiggered to increase production and drive down prices. Put another way, instead of supporting farmers, during the Nixon administration the government began supporting corn at the expense of farmers. Corn, already the recipient of a biological subsidy in the form of synthetic nitrogen, would now receive an economic subsidy too, ensuring its final triumph over the land and the food system.

These such subsidies were started as part of the new deal. The subsidies encourage farmers to put far more land under corn than would be possible without ongoing, massive government support. Midwestern farmers are pretty much the most "socialized" sector of the American economy and even then, it's just part of capitalism's welfare. So please, don't mistake it with anything but a byproduct of capitalism at work.
Posted by Booster Gold / Javier J. at 7:13 PM