Nothing But A Heat Wave!

Nothing But A Heat Wave!

While I'm sure you would think that I was talking about the recent heat wave we've been having in SoCal, I'm not. No, this Heat Wave is a new non-lethal weapon that is being tested in Afghanistan. Yes, a Heat Ray is going to help win the war in Afghanistan.

A newly-developed heat-ray gun that burns the skin but doesn't cause permanent injury is now with US troops in Afghanistan. The Active Denial System (ADS) is a non-lethal weapon designed to disperse violent crowds and repel enemies. It uses a focused invisible beam that causes an "intolerable heating sensation", but only penetrates the skin to the equivalent of three sheets of paper.

The discomfort causes whoever it's pointed at to immediately start moving away. They often scream but the US military says the chance of injury from the system is 0.1%. It's already been tested more than 11,000 times on around 700 volunteers. Even reporters have faced the heat-ray.

Lt. Col. John Dorrian, a US military spokesperson, says the kit is now in Afghanistan but no decision has yet been made on its use. There's been much talk about the need to keep civilian casualties in Afghanistan to a minimum. The heat-ray gun could help.

The beam produced by the ADS can travel more than 500m (1,640ft) and is seen as an important new way to limit unnecessary deaths and minimise war zone casualties. Developers also say it could also be adapted to other operations, like fighting drug smuggling at sea and general peacekeeping operations. Research is continuing to make the system smaller, lighter and less expensive, says the Pentagon's Joint Non-Lethal Weapons Program.

It's Like A HEAT WAVE, Burning Up My Skin! 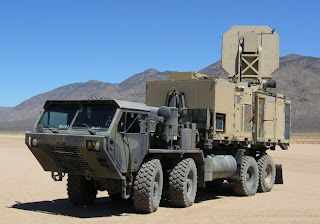 Raytheon is two years into a four-year, $40 million development contract, Karcher said. How soon the weapon is deployed will depend on the military's interest, and while the technology may be ready, troops must also be trained on it and engagement rules must be decided by a four-star general, he said.

Heal said the military version would cost about $1 million, and the U.S. military could require many. Karcher said the first prototype cost about $10 million.

It's pretty clear, living in America is awesome. It's like Star Trek without the socialism or humanity. I guess the old saying is true; If you can't take the heat stay out of the Kandahar. We're living in the science fiction dystopias we read about as children.

This thing will make your average elderly 60 minutes correspondents flee from 100 yards! Just look at it in action!

Ha! Did you see that shit? They tested it on "unruly mobs" with "no more war" and "peace not war" signs. They aren't even trying to disguise that dissent is officially seen as treason by the army. Well, in America anyway.

Though I guess anti-war protesters are more of an existential threat to the military than every terrorist in the world put together. Terrorist might kill individual soldiers, but protesters might alter public opinion and cause someone to cut funding. Then how are they going to afford those fancy long range microwave ovens?

Either way, that clip should also highlight on how the History channel is total shit

How can you face angry protesters and think to yourself - Hmm, perhaps we should develop a million dollar ray gun to zap them instead of considering the legitimacy of their indignation? And we wonder why people hate us.

Then again, we could always burn them until they love us. 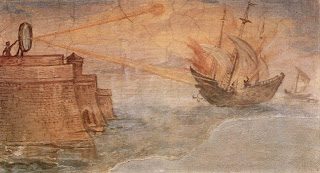 I wonder how long it will be until they start using this to keep teenagers from loitering in front of the mall. I'm sure I can't wait to see this deployed and in action at the next g8 summit. When will this be used to interrogate your standard hajji as they're tied to a chair for hours.

I guess the key features of this is it's effective even on "individuals with a surplus of melanin" if you get what I'm saying. Maybe it will be easy to counter this. You could always just carry panels of whatever the antenna is made out of and reflect that shit back. Reversal of fortune is a beyatch!

And for those of you who think you can use tin foil to counter the rays and protect yourself, have you ever put any kind of conductive material inside a microwave oven? If this thing hits a solid metal object. it will arc and create plasma. Hint: That is not a good thing. It's sort of like those sleeves for hot pockets and little paper trays for microwave pizzas. They heat up somewhat and add some browning to the food. 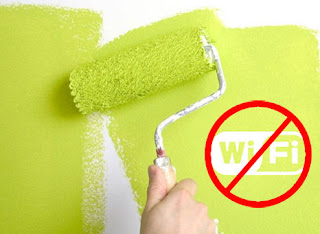 The cheap Do it yourself way to shield against this is to either cover yourself in vegetation or get some of the anti-WiFi paint they have now and cover your clothes and shielding with it. The paint works up to 100GHz but sadly isn't for sale.

You could make it easily by getting some regular paint and mixing in a bunch of metal oxide dust into it. One other thing that could possibly save you from a non-genital burning sensation is a special primer used in welding applications which contains a high percentage of metallic aluminum.

There's a lot of ways to bypass heat waves to get to your skin, this is why there's always the taser to fall back on. You can't forget that poster child of the non-lethal world. You can't overlook it when it's in the form of a god damn shot gun..

Now that scares the hell out of me more than being cooked alive or having my eardrums burst. Then again, have you've ever heard of an officer hitting a target 70 feet away on the first try? I wonder how many people will get hit with a random shocking shotgun shell?

Back to the heat wave of doom - When you think about it, it's ineffective for the peeps on Jersey Shore. To them this sounds like a bad ass way to speed tan, this thing would probably bronze you up in like 10 seconds. No more outrageous fees at the tanning salon or ruining a good club shirt with orange dye. All you gotta do is start a riot!

It's only a matter of time before some G.I. in Afghanistan uses this thing to vape some bomb-ass opium. You know it's going to happen.

Other uses would be to make a wicked sick grilled cheese. You know it's going to taste good when a $10 million dollar oven is used to make it. What would really be cool is if this thing caused the metallic strips in dollar bills to spontaneous combusted immediately upon exposure.

Next time I'm at a riot I'm going to carry buttered potatoes in my pockets. Or maybe popcorn kernels stuffed under my shirt so the cops will be like, "oh shit, the radiation! He's hulking out!"

There's like a million different funny things you can do at a riot these days. Humor is a very powerful weapon. Though not as powerful as the water in your skin boiling.
Posted by Booster Gold / Javier J. at 7:21 PM