I mean, just saying "the N word" automatically made you think of nigger in your mind, so really, I just made you a little bit racist. Then again, words are just fucking words. It's the context that they are used in that really matter. That and who is using it. In this case, we already knew that John Schnatter, the founder and public face of Papa John's pizza, was an asshole. And thus he had to apologize for using the N word in a conference call.


In a statement issued through the company, Schnatter said: "News reports attributing the use of inappropriate and hurtful language to me during a media training session regarding race are true. Regardless of the context, I apologize. Simply stated, racism has no place in our society."

According to the account in Forbes, Schnatter was on a call with Laundry Service, a marketing agency, and was asked how he planned to manage future public relations flare-ups.
On the call, Schnatter sought to downplay the significance of his criticism of the league and its players, Forbes reported.

"Colonel Sanders called blacks n-----s," he said, complaining that Sanders had never received backlash, according to Forbes. The parent company of KFC did not immediately answer a request for comment.

Forbes also reported that Schnatter recalled growing up in Indiana, where he said people used to drag black people from their trucks until they died.

Forbes reported that Schnatter's comments were intended to demonstrate his stance against racism, but that people on the call were offended by them.

This is why you don't go full garlic butter, man. Side note, the part where Forbes sought comment from KFC about whether Col Sanders ever used the n-word cracked me the fuck up for some reason. That is some amazing diligent journalism on their part and is reason number 40,403 why I just slum it on a blogger page and don't have a desk at the local paper.

To get to the heart of this and for anyone who just doesn't already know of this piece of shit asshole who makes shitty pizza. He lives in the largest house in the USA, it's pictured below while not pictured below is a dual underground garage. He refuses to provide any sort of health coverage to his employees because it would cost a whopping fourteen extra cents per pizza and Papa likes his profit margins as is! 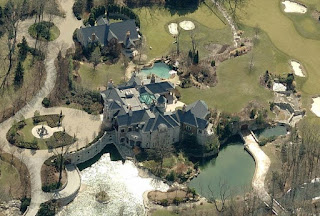 In 2015 his pizza chain was court ordered to pay $12,3000,000 to more than 19,000 Pizza delivery men who had been stiffed on their wages. On top of that, he has insured his hands for millions of dollars, which just seems like the beginning aspect of why this guy is so very very strange. I mean, that's not really evil. But come on, really? I can barely muster up the energy to insure my goddamn property, let alone my magical dough flipping hands.

Also, Col. Sanders was born in the goddamn 1800's and died in 1980. Which century does Papa John think it is right now? Even if you claim to have seen Sanders on television the other night, be it looking slightly different each time. Him calling someone the N word has no baring on if you, an Italian asshole, can do it.

Back to the house for a minute. I know you're wondering, "Is that really the largest home in the USA? Sure, it looks big, but there's gotta be something bigger, right?"  To which I will answer, yes. Yes it is. It's also the most expensive house. A bigger question would be what one even does with a house that big.  After dick swinging and throwing in a movie theater screen and a ton of other bullshit rooms, like say one with a bouncy castle or a giant pool, what the fuck do you even do next? The ideas eventually run out. I suppose you could use a room for eating, but wtf, who the hell sits down at a table in their own home to eat a meal? Come on, that's just silly. Maybe I just can't dream that big because I'm not slinging pizza so shitty that you have to slather corn syrup filled "garlic butter" all over it.

But again, I guess the answer to all that is simply that a giant asshole just needs a giant house. Maybe he should use that giant ass house to stay the fuck out of the public eye. As it seems that he really comes across as a dumb piece of shit asshole every time he shows up in the news, which seems to be a pretty regular thing lately.

He complains about the NFL all the time because he is a sponsor and he stands to lose money there, the Superbowl is the highest grossing ad space you can buy, so, you know, small dick big house over there clearly has to jump on that and make sure he voices his worthless opinion on if players kneel. Even more comical is that given the NFL is his huge bread and butter, that he's a giant Trump support since Trump is constantly stirring shit with the NFL.


Let's get some sodie pops - Which I guess must be something completely different than what I know to be Sodie pops, given that he just can't hold his liquor. To end this stupid piece, here he is completely shitfaced at a Cardinals game in 2013 kicking it with a couple of bros. 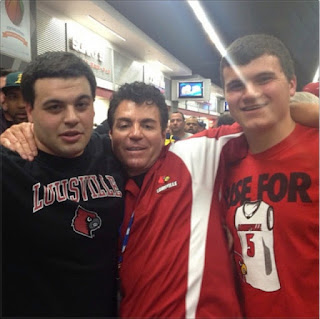