Today Jon Stewart, no - not the black green lantern, gathered today in what I hope isn't remembered in the vein of our generations Woodstock, though Woodstock also had corporate backing and was attended by rich kids who got drunk and high all weekend too. So maybe I'm being a little bitter and misguided in thinking that.

But still, this is a rally to bring back sanity and the chances are there's going to be so many awful costumes in the crowds that it'll make Washington look like it's comic con with politics. Not to mention the amount of folks going there simply to get drunk and potentially get laid with total strangers in the middle of the national mall is far from anything near restoring sanity. Which I guess is where Stephen Colbert comes into the picture. 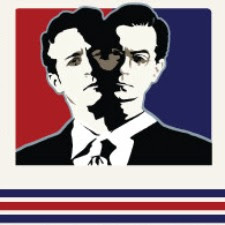 You should be afraid of the amount of folks who will probably get arrested for indecency. Ironically a tens of thousands of person event about political discourse that won't have any political discourse because, a series of speakers lecturing to a massive crowd isn't discussion. Do I also need to point out that "restoring sanity" is a pretty empty gesture. Then again, this is the daily show... The place you go when you want to laugh about total lack of function that politics serves.

This rally just comes down to one major battle.. Viacom vs Newscorp and who will come out on top. Newscorp is pretty damn ugly, but they give me a pay check. Viacom is obnoxious in every possible way. So really, this is a battle between two really ugly beast. 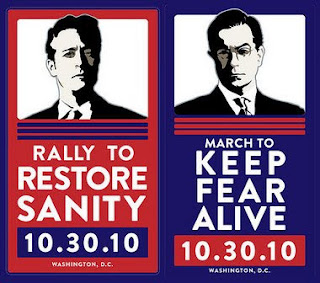 I'm curious as to what the turn out for this will be. I'm going to go with about 400,000 people. Most of them will be stoned out of their mind or at least with some sort of "legalize pot" banners and not really concerned about politics in the slightest. After this whole event the media will then not shut up about how much young people care about politics for the next few days before the results in Tuesdays elections comes out and shows that the young voters didn't actually give a fuck.

To expect folks to go to the rally and not just be looking for fun or to say they were there is silly. The last thing they actually want is some sort of serious lecture about political discourse and the current standing of our nations health.

The Daily show the other day had Obama show up on the show and even though I voted for the man, I had to laugh when he said the following.

"This is the most significant piece of legislation in this nation's history."
-Obama, regarding the healthcare law that was passed on The Daily Show

I just have to wonder if he's actually buying his own bullshit. Maybe he's just saying it in hopes that the stoned out viewer watching the show will potentially buy into it. I mean, that was just so out there. 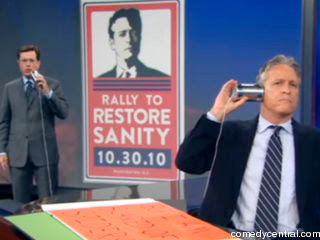 Yeah. He's a hundred percent correct... just not in the way he means.

WASHINGTON (AP) — President Obama is expected to order all U.S. combat troops to leave Iraq by August of 2010, administration officials said, closing the door on a war that has led to the deaths of at least 4,250 members of the U.S. military and tens of thousands of Iraqis.

It's pretty clear that the level of expectation that Obama inspired in all of us is just not something we're going to reach. Is that a bad thing? By no means. It's just reality and we should hanker down for some tough times. 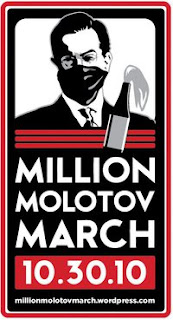 He's certainly did a lot more than Bush did in getting us out of this hole we dug for ourselves. I guess folks just hoped and had some expectation that we would take some express magical elevator out of it.

This rally for sanity may be comedy.. and it may just be a place for like minded Daily Show viewers to enjoy some jabs at the system we feel so disenfranchised with, I'm just hoping that it gets a larger attendance than Glenn Beck's rally. Now that would be some fucking comedy gold.
Posted by Booster Gold / Javier J. at 7:25 AM