Am I the only one who realizes that TLC has become some evil entity? People complain about MTV no longer showing Music videos as their name implies they would, but at least in the wee hours of the night, if you can't sleep and turn on the TV, they'll be playing some music videos. TLC on the other hand is so far from what it originally started as - The Learning Channel.

Yeah, that's right, it used to be a channel for learning. The only thing that the network has taught me is how low network programming has gone. In fact, you could mark TLC as the opposite of construction learning. If anything, they're spear heading the complete opposite of that and teaching people how to be less educated. 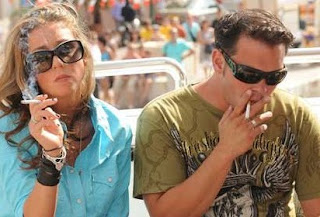 They were all gung-ho with home make overs as well as filling the masses minds into thinking that they to could get into the field of flipping homes and making a quick buck with Trading Spaces, Flip This House and all those other home make overs. Don't try to tell me that it had no hand in the shitty housing market that we currently have.

Then they taught that you can easily crank out a shit ton of kids and not only be praised, but rewarded with your own weekly show for it in John and Kate Plus 8. Why do you think Octomom was shooting for big money when it came to child birth? She was hoping to land that sweet sweet TLC money!

So what's next on the list that TLC wants to destroy our society with? Polygamy! Let me introduce you to their new show....

Sister Wives is a show that airs Sunday nights at 10:00pm on The Learning Channel. It documents the life of a real life polygamist, Kody Brown, living in Lehi, Utah with his three wives and 13 kids. The show will also show his courting of a 4th wife. (rightmost in picture below) 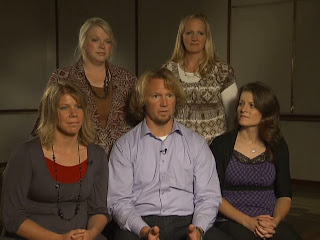 (Sorry ladies, this man is taken...well, kind of) 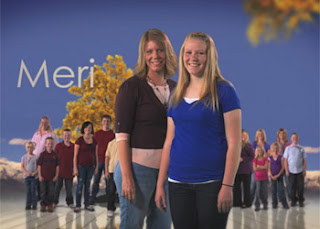 Meri and Kody have been married for 20 years, and is Kody's first wife. Together they have one child, and from what she has said, she has been unable to produce a second child. She comes from a polygamist family herself (her father had 5 wives). 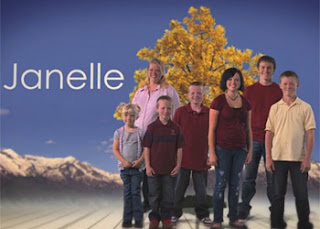 Janelle and Kody have been married for 17 years, and have six children together. She seems to be the only wife to have a job outside of the house (although they haven't said where, and I've been unable to discover where), She has made the claim that
"I'm terrified of having an employer find out about my lifestyle in case they have prejudices."
Well then, good thing you went on TV to tell the world about your situation, then, huh? In any case she works long hours and she does not come from a polygamist family, but was friends with Kody and Meri for years before deciding marrying a married man sounded like a damn fine idea. 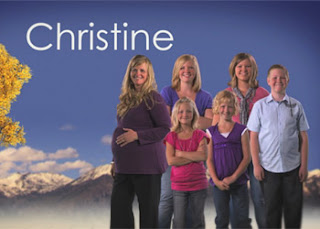 Christine and Kody have been married for 16 years, and they have 5 children together, with one more on the way. She seems the craziest of the wives, for several reasons. First off is the way she names her kids (all other children seem to have normal names): Aspyn, Mykelti, Paedon, Gwenelyn, Ysabel, and Truely. Also, she says that she wanted to be the third wife of someone very early on in life. She wouldn't date anyone who didn't fit "the lifestyle", and felt being the second wife would be too awkward. But third wife is just right.

That caught me off guard but then I remembered that one girl I dated made the claim that she wanted to have two or three divorces by the time she was thirty. So I guess I can buy that Christine has a goal and, well, we all need goals in life, right?

Lifestyle
Now I've never was much into Big Love, but from what I recall it seems like it got it nailed down right on what a modern polygamists family is like. Their lifestyle is pretty strange. They live in a giant house that is technically three houses connected inside. Kody has a schedule with each wife, whether it be for dates or more intimate encounters. They also send their kids to a polygamist school, whatever the hell that entails.

I'm not exactly sure if I figured out what kind of job this guy could possibly have to support 20 people. I heard he was an advertising salesman and his second wife works (still a mystery as to where?). So I guess he's just very good at his job? Maybe he has some good investments. Then again, I guess he also has a pretty sweet contract with some TV network going on.

The end of the first episode revealed that Kody is now courting a fourth wife, Robin, who already has three children of her own. (I'm assuming she's a widow? Can't imagine she's divorced.)

Is this legal?
Brown and his wives have claimed they participated with the show to make the public more aware of polygamist families and to combat societal prejudices. Brown has claimed his polygamist arrangement is legal because he is only legally married to one woman, and the other marriages are spiritual unions.

Here's the thing, though. Bigamy is a felony in this country. Utah is a common law marriage state. Granted, I think you have to file a request to have said common law marriage recognized, but this is bound to make the police antsy. It would be like if marijuana is decriminalized and a cop doesn't go after you for smoking a joint, but then you start blowing smoke in his face saying, "Whatever, I can do this if I want." Said cop is going to find a way to go after you.

And it seems the police are already doing just that. Just one day after the premiere of this show, Lehi police announced they were conducting a bigamy investigation into the family.

A very unconventional Utah family is thrust into the national spotlight tonight in the premiere of TLC's "Sister Wives". One man is married to four women, and he fathered more than a dozen children. The show follows a polygamist family as they pursue their fourth sister wife. But, polygamy is illegal in America.

Greg Skordas is a local defense attorney who is studying up on the crime of polygamy in the state of Utah.

“If people are flaunting polygamy, a very serious crime in their jurisdiction, they’ll do something about it,” says Skordas.

The Brown family is taking their unconventional family public. I caught up with Kody and his 4 wives on Friday while they were talking about their new reality show, and Kody calls 4 different women his wife.

“I wouldn’t want to be without any one of them,” says Kody Brown.

There is video of what the Brown’s call a spiritual wedding ceremony between Kody and his fourth wife Robyn.

“If they portray a marriage, and the person is already married, then I think that’s evidence the person is committing the crime of polygamy,” says Skordas.

Kody claims to have been married to his first three wives for the past 16 years, and he has children with each of them. Skordas says this will make it easier to prosecute him.

And not one of these women or the man they say they are married to is shying away from showing the world how four women can be married to the same man.

“If I was advising this family about this TV show, I would certainly say, don’t flaunt polygamy in this state at this time,” says Skordas.

Skordas believes the Attorney General and the state’s attorney in Utah county is watching this show closely, and probably subpoenaing taped interviews of the adults.

Essentially because of Utah's special history with polygamy, they go after this type of stuff. If this guy was in Montana he would probably be getting away with it.

Is this right?
Well, that's the question, isn't it? On the surface, I feel that if children aren't being abused in some way, and no women are forced into it, then who am I to judge? The wives are all very plain. I guess I should say that whatever float your boat and doesn't infringe on the lives of others should be alright. Though I don't see anything illegally wrong with this situation. There's got to be something wrong with a woman's self esteem if she feels that she only deserves a fraction of a relationship though.

I guess what it boils down to for me into seeing this as creepy is that these bigamy cases are always one guy with a bunch of women and that has some kind of icky undertones regarding women. I don't want to doubt that they love each other and all that, but I think there's a difference between polyamory and polygamy, and that's the polygamy always means women are kind of like a collection to the husband.

I guess that's what bothers me the most. No matter how much they say that they're increasing their love instead of dividing it, the fact is that these women are expected to share one guy and love it, and he's free to go out and add more women whenever he feels like it. I realize feminism has no place in this home, but why can't the women go out and increase the love by finding another husband to come into the fold?

If I could air my dirty laundry out here again, I dated a girl once who was extremely into the idea that they were poly-amorous. So even though I wanted to get serious, she kept it at bay. Eventually wanting some double standard in that she wanted a one-sided open relationship. I was having none of that bullshit and dropped it like it was hot. While I get the whole notion of the family style love here, these women need to realize that they aren't getting much more than a piece of the guy when they really deserve far more attention.

Even in the show itself it's as if they are setting up the happy prologue to a train wreck down the road to Kate Gosselin size proportions. As soon as one of the wives admitted to being jealous, I was like "Okay, here comes the car accident!"

When watching the interviews with the wives, something just seems terribly off about all of them. It's as if the first two seem to be crawling at the walls, and the third seems to be one step away from just cracking and killing them all. I guess the majority of people will be watching to see when that happens.

I suppose I should put in a joke here about how moronic it is to want more wives. I mean, most guys don't even want the one they got stuck with. Okay, I can check that off the list of requirements when talking about multiple wives.

TLC, don't ever stop being a dysfunctional network version of the Jerry Springer show.
Posted by Booster Gold / Javier J. at 11:14 AM