Today is Carl Sagan's birthday. Though he isn't alive anymore, it would have been his 75th. Over the weekend was Carl Sagan day. A day when we should celebrate science in all its forms. Even though he wont be celebrating his own birthday on this day, we should all be celebrating what he brought to you, more than likely when you were a young lad. This significant man showed us how insignificant we reall ya re in the universe.

Carl Sagan was a planetary astronomer and author who wrote to popularize science. But he went far beyond just telling us what’s going on in science in layman’s terms; he set out to connect the entire human existence, from our ancestral roots to our future expansion into space, to the entire universe as it is, to our understanding of it (in its various steps) and how it shaped our lives, to our relations with our world and each other. 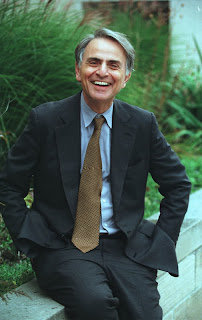 A common theme in his writing is the vastness of the space, and the smallness, isolation, and fragility of our planet. Especially in light of his life during the Cold War, he wrote of the fragility of life and our chances of advancing as a civilization past the danger of blowing ourselves up. He wondered if every advanced civilization has to pass that “test” at one point or another.

That brings me to the next theme, his views on alien life. He was a proponent and pioneer of SETI, the Search for Extra-Terrestrial Intelligence. Taking that it’s a statistical near-certainty that alien civilizations must exist, and the tremendous leap that humanity would make if/when it contacts one, he was driven to explore that possibility. His wonder, however, was tempered by a heavy skepticism of UFO accounts and lack of observed evidence of any other beings. When he died in 1996, we were just discovering the first planets outside our solar system. Now, there are about 400 of them confirmed. I only wish he were alive to see these discoveries!

According to him, our first contact with aliens would be the next of the Great Demotions he wrote about in Pale Blue Dot, a series of realizations of our cosmic insignificance in the face of new discoveries. That insignificance, that aloneness, is the basis of his call for love to one another since we're all we have on our island in the vast void.

He was behind the design of the plaques on the space probes Pioneer 10 and 11, and phonograph records on Voyager 1 and 2, which are now moving away from the Solar system and may serve as a galactic message in a bottle to be found by aliens. 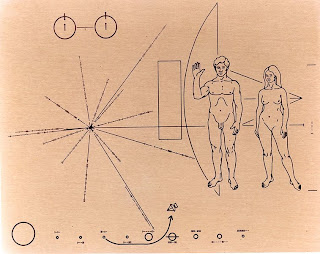 Fun Fact: Sagan and NASA ran into a lot of flack in the late 60's and 70's about the gold plaques on pioneer 10-11 and Voyager 1-2. The former showed naked humans on it, which thousands of people complained to their congressmen over, due to NASA using public funding for sending obscenities to space. There was also feminists that wanted the woman to sport a more detailed vagina.

Also, one of the plaques showed Earth's solar system in relation to neighboring star systems. To give a general guide to where we are. A lot of the general public complained to congress that NASA shouldn't be showing our location to potentially invading aliens to find.. Good to see that we have evolved as a culture in the last few decades to the point that.. oh wait no, we haven't. People still complain and most likely sensationalist media will pick it up and make it a huge story. 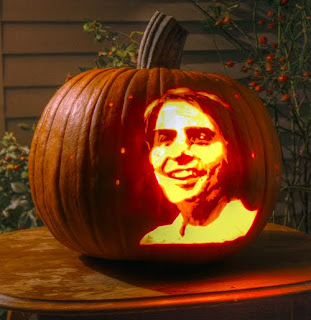 His most famous work is the TV series Cosmos, in 13 one-hour parts. It’s on Hulu and Netflix streaming. In each episode he goes over a different aspect of the universe, how we came to learn about it, how it has effected us, and what it means for our civilization. It's a really poetic work, filled with an amazing feeling of wonder and awe.

If Cosmos was about our history, the book Pale Blue Dot is largely seen as its sequel, and deals with our place and future in space. It can be best summarized by this video.

The Demon-Haunted World: Science as a Candle in the Dark is about rational scientific thinking as our "cure" to our history of superstition, pseudoscience, and belief in the supernatural. It stresses skeptical thinking and education as a defense against getting bamboozled into injustice. The other main theme is the right mix of wonder and skepticism needed to advance science, but keep it honest.

His last book, billions and billions, written while he was dying of cancer, is much more about Sagan's personal opinions and reflections on life in general. It's a good read if you want to learn more about his general view and outlook that he hints at through all his books and articles.

I’m sure most of you that have read the above books would agree with me that they are beautiful works of profound wisdom and insight, and I dare say, should be required reading for anybody who would consider themselves a complete person.

The biggest blow from his death is that I feel no one has taken up the reigns of his roll after he is gone. Richard Dawkins sort of does but he doesn't have the temperance or compassion of Sagan. I guess there's Bill Nye, but he's more of a child educator than an intellectual. I just hope someone can fill that void soon and get a respectable voice for rationality back in the public sphere.

If you have the time, the 13 one hour series "Cosmos" is really breathtaking and mind expanding to watch. If you have Netflix Istant, "Cosmos" is on there. So if you're connected via Xbox or your digital cable provider, you have no excuse. If you don't have those options, "Cosmos" is also available on the internet for free on Hulu. 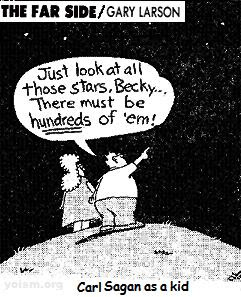 Viewing that series, you have to really be sad for one simple reason. In all this time, nobody can really fulfill Sagan's role as science popularizer. COSMOS really was a breakthrough for amny children to the wonder of science and natural history. I like Dawkins and I feel he has that certain "wonder" aspect to him but he unfortunately rubs many the wrong way. While I agree with him on religious view points, at least Sagan didn't push that agenda all that much.

Then again, Sagan rubbed many of his colleagues the wrong way. Many felt he was lauded for what was sub-standard work in his field. What many of them did no realize is that Sagan made science accessible to everybody not just fellow scientist. I think that's why our generation loves him so much. 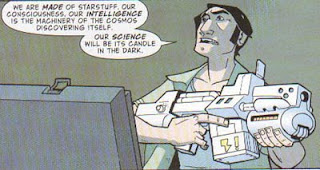 It is historically known that Sagan smoked a lot of weed. But this shouldn't be any reason why you should discredit him by any means. If anything, you should also watch COSMOS high. You'll get a different experience from it. Then again, weed is too small for watching cosmos. You need mushrooms or something bigger. This is based on scientific research just as Mr. Sagan would have wanted it.

Before you consider him just some pot head, remember that up until about 100 years ago 90% of humanity thought that disease was caused by evil spirits. Sagan was able to transcend the idea that space is something us normal people can understand and grasp. For that reason alone, Carl Sagan is about as close as one person can come to completely justifying the existence of the human species. Even if he couldn't cut a pie for shit. 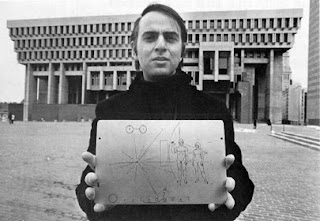 If you were lucky enough to catch the movie The Day After there was a debate afterwards in which Carl Sagan was a part, along with Robert McNamara, Henry Kissinger, William Buckley Jr, and a few others. Worth watching for any Sagan fan and any person who wants to see his passion on the topic of Nuclear Weapons. Part 2 is below, which looks like it is the real start of the debate.

It really is tragic that he died of cancer. I wonder what he would say to the latest achievements we have reached in space exploration. The vast wonders of space travel and the launching of the rovers that are now exploring the planets that he talked about in his Cosmos series.

Today would be a good day to start your exploration into the universe. Not only will be a great way to learn about everything around you, but it'll also teach you a lot about us as people and how we can better treat each other, the planet and the universe around us. With that I leave you again with this one clip.. which should be the only clip you ever need about Carl Sagan.

dude i think i love you.. didnt know you knew sagan... that man opend up my mind. with that show cosmos.. i need to read more on him. but i like the watch it chemically idea im gonna try it...

Thanks for the great article on this truly remarkable human. Wish there were more of him than the people who sell heaven and hell to gullible people