Online Dating: By The Numbers

Online Dating: By The Numbers

So I'm pretty sure that by now, Online dating is no longer something you keep as a dark dirty secret. I know this very well. It's just not holding that stigma anymore. It is, for the most part, socially acceptable.

The website OKCupid posted some awesome statistical analysis. What is that site? OKCupid is the evolved version of Thespark.com. Which was a personality test website that went way beyond "which goku are you", so yeah, they're into stats. I suppose it makes sense because they are a bunch of MIT grads running this place.

I not only think that these are amazingly interesting, but they can teach you something about the people that are on the other side of the monitor. It'll better help you understand each other and your chances at meeting Ms. right, or if it's Ms. Right now.. I guess that works as well. 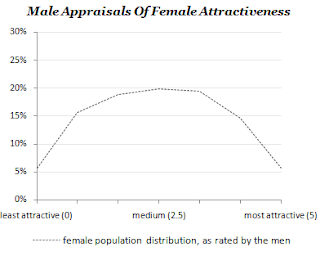 The curve is symmetric and surprisingly charitable: a woman is as likely to be considered extremely ugly as extremely beautiful, and the majority of women have been rated about “medium.” The chart looks normalized, even though it’s just the unfiltered opinions of our male users.

Given the popular wisdom that Hollywood, the Internet, and Photoshop have created unrealistic expectations of how a woman should look, I found the fairness and, well, realism, of this gray arc kind of heartening.

Then again, the ability to photoshop and manipulation the angles in a photo doesn't mean you're going to see the same person as you did in those photos when you do eventually meet..

Let's see what the internet males have to say... 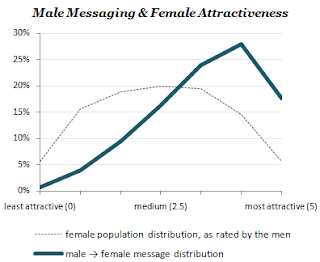 When it comes down to actually choosing targets, men choose the modelesque. Someone like roomtodance above gets nearly 5 times as many messages as a typical woman and 28 times as many messages as a woman at the low end of our curve. Site-wide, two-thirds of male messages go to the best-looking third of women. So basically, guys are fighting each other 2-for-1 for the absolute best-rated females, while plenty of potentially charming, even cute, girls go unwritten.

I know what you're saying.. Someone get the Academy on the horn.. we've discovered that men prefer to hit on attractive women. But it goes deeper than that.

On the left there is the power of optimism and on the right is the power of pessimism. Then we have this next graph, which just shows us that Women seem to be more judgmental but also more open-minded: 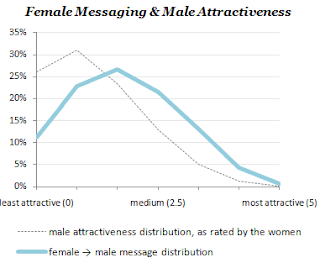 I mean, on one hand, Women are pretty harsh critics on outer beauty. Or maybe the average internet male looking for a date on websites like this aren't the best lookers... Let's face it, men are just uglier. Partly from not putting effort into looking attractive and party just because.. Men aren't really taught to look "sexy"

In fact, the graphic has a glass half full to it. I mean, if being on the ugliest end of the scale gets you more messages, then I suppose that's a good thing. But I do find it funny that the graph is pretty much saying that attractive men don't get messages because they don't exist.

Maybe it's just that there's no agreed upon or universal standards for male beauty while you show an obviously hot girl and every guy gets a boner. But it seems clear that all the ugly guys put together get more messages than the one guy that every woman thinks is attractive. 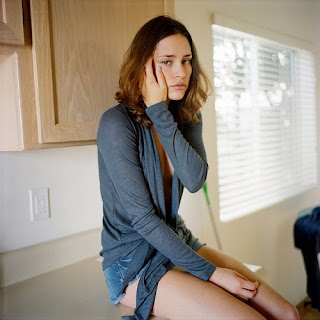 It's unclear whether the user ratings take into account the attractiveness of the bio each user writes or just their picture; the rater can rate the person either before or after reading the profile. But it's really certain that there's no clear definition for male hotness opposed to the fact that the level of hotness for women seem universal.

I suppose the main point of the next chart is that women still have a monopoly on sex, so of course they can hate every single man and still be successful. 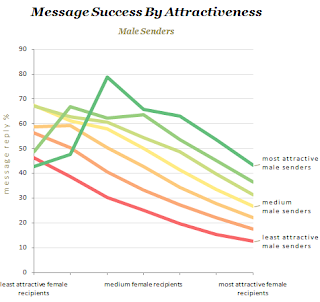 I wonder if this is the power of pessimism or unattractive women assuming that attractive men are unpleasant people. Maybe every single unattractive woman is psychotic from self-hate because of the patriarchy.

Even if you're at the top end, there's no way to know if she's into skinny guys or buffy guys or effeminate guys. So even a top 1% person doesn't have any "easy in" to talk to any woman they want. I mean, if there's any proof, just look at this chart 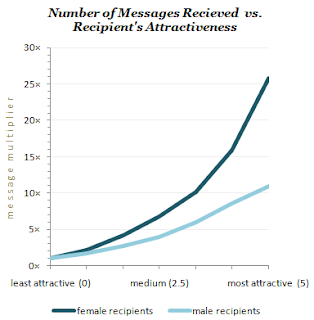 First it's easy to point out that even hot males don't get that many messages. As for women, I wonder if this graph is tainted by the fact that there are probably more male users on the site than female.

Then again, the way society has made them see themselves, I'm sure most women wouldn't preceive themselves at the same place on the "attractiveness scale" as you percieve them. So limiting the women you allow yourself to talk to is dumb as hell. Color of skin, on the other hand.. is something you should worry about. 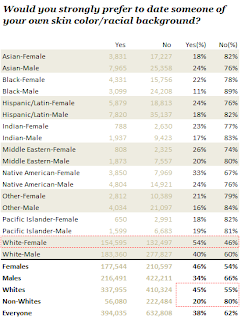 What I'm trying to say to you ugly straight men, Don't feel like a useless commodity that can be upgraded for a better model at any give time. You're probably not as ugly as you think and if the graphs show anything in the information, it's that women have taste that vary greatly. So chances are a very hot girl may consider you attractive. Attractive enough to have sex with you. Surprising, I know. But perhaps you shouldn't make sexual satisfaction/intensity the center of your relationship life and/or self-assessment.

Unless you are actually deformed or something, most people fall somewhere in the "average" zone, and will be perfectly OK. This is especially the case in the US, where good nutrition, medical care, etc mean a lot of problems for your looks never manifest (though obesity can be a problem). 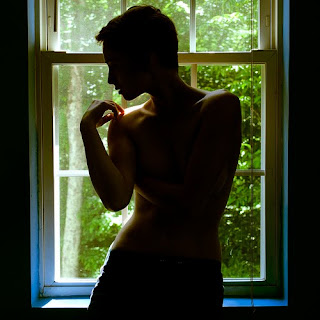 Just realize that girls who identify as "atheist" are ten times as likely to respond to a bullshit message amounting to a short-short-story about nonsense. as are girls who identify as "agnostic", when you get to religious types.. it's just that they didn't want to pay for the eHarmony registration and will more than likely not like your heathen ways.

And those who use the Zodiac symbols to pick your match.. you are otherwise insane to think that it has any sort of baring on your relationship and should not be taken as anything more than silly shit to just ignore. 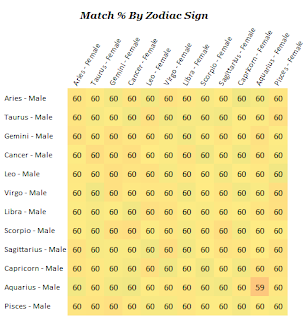 I know what you're thinking, What's up with Aquarius not being compatible with each other? Yeah, there's a 1 percent difference from every single other number. You shouldn't find the statistical difference significant enough to believe in astrology.

I guess all these charts and graphs can be two things.. pretty boring to look at and remind you of school, which you really don't want to think about. Or could see that there's some interesting information here that you can use for your advantage.

In my case, my girl sought me out. So maybe I shouldn't take that as a compliment because... well, then, that means I'm one of those ugly ones.. right? Damn you graphs! And so far I'm pretty damn content with this situation. But these do make you look at online interaction in a different light. Celebrating a year so far and loving every minute of it.

Anyways, if you want to take a look at more graphs to get some more insight, check out here to see what the very curious internet socializing is all about.
Posted by Booster Gold / Javier J. at 11:38 AM