When I was young I hated pledging to the flag in school. I also hated daily prayer. But then again, I was in a private school and the nuns sure ruled with an iron ruler. God damn you Sister Mary Margret! You see, the flag is very important thing to our culture. The series of articles will prove just that as we are only a few days away from giving thanks on thanksgiving... Our first official meal on this great piece of rock we call the U.S.

It seems that there's a lot of new sales tactics for flags these days. Take for example internet superstar Chuck Norris. He, as a true patriotic soldier, is calling for his fellow teabagger followers to stop using the "modern" American flag and instead, pay him $73.50 for The Chuck Norris Teabagger Flag

How Patriotic! I mean, who would have thought that a tea stain would equal heritage? Then again, do you know what's so god damned American about that $73.50 flag kit? The fact that the price includes $70.00 of pure profit. That's about as AMERICAN as it gets! You too can feel like a revolutionary war hero by waving a flag that would not exist for another 150 years!

One year when I was a camp counselors for the inner city kids at the YMCA I took a flag to hang on the outside of the cabin. It fell to the floor and a girl's counselor saw this and demanded it get burned because it touched the ground. In the middle of the night it was taken and half burned before I could get a hold of it. The moral of that story is because of that situation, I know Flag Code:

Flag Code, Section 3 posted: Use of flag for advertising purposes; mutilation of flag

To sum up for those of you who fell asleep in the middle of that law text book definition, it's illegal in some sense of the law to deface the flag and sell it in this new and awesome way. You know, in the sense of dipping it in tea to stain it.

The real question is are those really enforced? Flag-derivative products are everywhere. The flag napkins are always my favorite because you can wipe your face of the BBQ mess you made on your face. So perhaps that answers your question on if they're really enforced. But it's all about pointing out the hypocrisy in pretending to be patriotic and not even being able to follow the Flag Code. Then again, there's no penalty for violating the flag code, so even if it were enforced, it wouldn't be any different. The Supreme Court has ruled that penalties for mishandling the flag would violate the First Amendment. 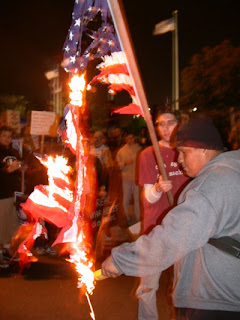 So what do you do when you need to get rid of a flag? You take it to the American legion so it can be disposed of in a respectful manner.... Ha, yeah. Fuck that. I think I can find other ways of disposing a flag that don't include being constantly hit up for spare change or probably raped in the always shady area where the American Legion is located.

The proper way to dispose of a flag is to burn it, but if you don't want to risk someone seeing you doing that and trying to kill you. I think the Boy Scouts will do it for you and it'll earn them a badge. Or you could just dump it in your garbage bag with your other discarded trash. It's a piece of cloth and it's not like it's representing a country that deserves respect. Flags and nationalism mean nothing, you are a fucking child if you think otherwise.

It's not like it matters to most of today's youth. Check out this Miley Cyrus music video;

Missed it? Notice that flag in the background? Yeah.. Now millions of teenagers will think that there are only 32 states in the Union. Thanks Miley. 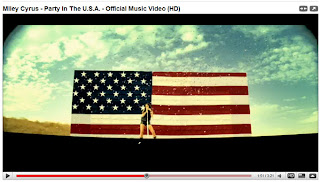 But you know, it's nice to realize that there's some people who actually think for themselves and use this patriotic symbol of standing to a flag and make a statement with it. So much that this website is saying that a 10-Year-Old Will Phillips Is a Bigger Gay Rights Hero Than Obama

Will Phillips, we salute you. We knew the 10-year-old Arkansas fifth grader who refused to recite the Pledge of Allegiance — to a country that actively discriminates against LGBTs — was awesome. We had no idea how awesome until he popped up on CNN over the weekend to retell his tale … in front of an obviously proud, though mildly embarrassed, father, who says it best: "The more I heard from him, the more it became apparent that this wasn't a typical act of juvenile delinquency — this was a a very a-typical act of juvenile delinquency."

Do you think America would be different if articles like this used the word congress instead of the president's name? I sure think so. So this kid went ahead and told his teacher to jump off a cliff because he didn't want to say the pledge of allegiance. It's really a great story and you should see the interview clip

And the news article to it;

A columnist for the Arkansas News has stood up for Phillips against his angry substitute teacher. Predictably, fellow students have taunted the kid and called him a "gaywad," but he says he doesn't see his quiet act of protest ending any time soon.

So the kids went and slaughtered him at school. Not really all that surprising. Kids are pretty brutal and really terrible to other kids. But really, Gaywad? I'm kind of surprised "Gaywad" is still around. Has anyone traced the origin of the term, maybe it's got a longer history than I realize.

Gaywad is about 3x worse than "Gaymo" but Gaywad is very inferior, however, to the more powerful "Gaylord". To be honest though, he's quite the wad of gay, isn't he? I'm pretty sure they probably called him a Gaywad long before this incident anyway. Then there's the lesser known Galord Victorious. I am your GAYLORD, GET DOWN ON YOUR KNEES BEFORE ME! Being Lord of the gays isn't that bad when you think about it. It's like Royalty! But I suppose it would be more enjoyable if it wasn't a Sub twink, I suppose. I'm getting so tired of this Gaytriarch.

I mean, this kid is going to get slaughtered at school because that's what kids do to anyone who is different. I'm more worried about the Father. Look at his Dad nervously wringing his hands.... The boys at the mill are going to think he raised a fag.

Good thing the mill closed down 9 months ago.

The again, making children pledge allegiance to your country is really creepy. We should stop this propaganda bullshit sooner rather than later. I guess we're just used to creepy stuff. American nationalism in general is pretty creepy. In the end, I don't think this is AS powerful a motion. It wont end the way Gay couples are treated. Though he really is more of a hero to gay rights than Obama. Shit, anyone who has ever done anything nice for a gay person is a bigger gay rights hero than Obama.
Posted by Booster Gold / Javier J. at 3:52 PM