So, there's this little thing called Don't Ask Don't Tell. You may have heard of it was deemed illegal and unconstitutional by some judge in Riverside. Obama made one of his many promises to repeal it some time back;


So what is this crazy thing of not asking and specifically not telling? It's the thing where if you're gay and you say it out loud in the military, then you get kicked out of there. Mainly because they don't want to make the armed forces more gay than they already are.

In any event, our amazing congress did a thing... or should I say DIDN'T do anything.

Washington (CNN) -- A defense bill that includes the repeal of the military's "don't ask, don't tell" policy failed to advance in the U.S. Senate on Tuesday as Republicans closed ranks to keep the bill from coming up for debate.

The bill stalled on a 56-43 vote, four short of the 60 votes needed to break a Republican-led filibuster. Senate Majority Leader Harry Reid, D-Nevada, joined the opposition as a tactical move, allowing him to bring it up later.

Republicans stood united against the measure even though some GOP senators favor lifting the Pentagon's requirement that gays and lesbians keep their sexuality a secret. Republican opponents complained that Democratic leaders are limiting the debate and could have refused to allow GOP amendments to the broader National Defense Authorization Act, which included the "don't ask, don't tell" repeal provision.

"The president obviously continues to urge Congress to act, and is working as well with the Pentagon to see this come to fruition," Gibbs said.

The legislation, which is a broad defense policy bill, would not rescind "don't ask, don't tell" until after the Pentagon completes a review of the repeal's impact on the military. The review is due in December and would serve as the basis for certification by the president, defense secretary and chairman of the Joint Chiefs of Staff that the military could handle repealing the policy.

On Tuesday, the general nominated to head the Marine Corps told a Senate committee that he believes responses from Marines on repealing the "don't ask, don't tell" policy have been mostly negative so far.

Gen. James Amos said he had heard that at Marine bases and in Marines' responses to an online survey, the feeling "is predominantly negative." He added, however, "I don't know that as a fact."

In written answers to the Senate Armed Services Committee, Amos said he opposes repeal of the "don't ask, don't tell" policy now because it could disrupt cohesion due to "significant change during a period of extended combat operations." At the same time, Amos made clear that he would oversee a repeal if ordered to do so.

"The Marine Corps is probably one of the most faithful services you have in our country," Amos said. "And if the law is changed by Congress and signed by the president of the United States, the Marine Corps will get in step and do it smartly."

At a rally Monday in Maine, pop star Lady Gaga called on both Collins and Snowe to join Democrats in overcoming the expected GOP filibuster attempt. To loud cheers from the crowd, Gaga said she was proposing a new law titled, "If you don't like it, go home," which would remove homophobic straight soldiers from the military instead of gay soldiers.

"If you are not honorable enough to fight without prejudice, go home," she shouted.

Really... I'm surprised by all this. Yes. Indeed. Completely surprised..... Oh wait. No. I'm not. But hey, let's take a look at who voted down the party lines because.. well, it should be interesting, right?

I guess it comes to no surprise. Democrats whose future in November is unlikely are a lot more likely to lean right as a strategic action to save their ass. But what is surprising is Graham (R-SC). I mean, really? Really?! Then again, he'd probably doesn't want to do something that will out him even more and his BFF is leading the filibuster on all this.

By god, the Democrats are so bad that Republicans are able to stall an issue simply so they can take credit for passing it in the next Congress. Now that's comic book villainy. It's gotten so bad that in America, allowing gay men to murder defenseless browns while openly declaring their sexual preference is considered a cause for the left.

But maybe I shouldn't be upset. Why should I? I'm not gay, right? And should it really bother me that gays can't kill anyone for the government while being openly homosexual. Oh wait, am I compromising on treating people as equal

It's sort of like letting Catholics into the KKK because it's a small step towards eliminating discrimination. Then again, it should be more about getting rid of another form of institutionalized discrimination than anything else. Not to mention that without a peoples army, the people have nothing. 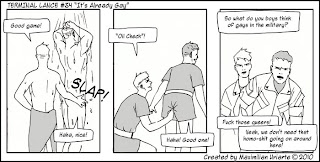 If you allow homosexuals into the military, you will deny the large hetero majority the comfort of their pastor even as they stare death in the face.

I hate to say it, but DADT is hardly hurting the military anyway. The bloodthirsty gays who murder the most browns will just stay in the closet. The difference between DADT and no DADT is a guy who is allowed or not allowed to say "I'm gay" before killing that brown sand person.

And the best and final line of that article is this one..

The White House is "disappointed" at the Senate vote, "but we'll keep trying."

Yes, it's just the primary platform for one state and yes, it'll get thrown out later when the actual election manifesto gets released, but it's still official party policy that gays should be criminals, and has been for 12 years, despite the fact that it would be illegal.

If there's any sort of wise wisdom I could impart on anyone, if I could even spew out wise wisdom is you're better off Fighting them, not fighting for them.
Posted by Booster Gold / Javier J. at 3:39 PM