As the "last combat troops leave Iraq", I think it's high time we politically rehabilitated Saddam Hussein. I know what you're saying, he was a monster who murdered thousands, why would I, as a leftist, feel the need to defend this man and to attempt to rebuild his image as something more than a threat to our very American way of life.

I do so because I am an American and in this country, everyone has the right for a second chance. Besides that, oh big whoop, thousands. Just think about how that number is dwarfed by the number killed by sanctions and the over one million deaths as a result of the invasion of Iraq. 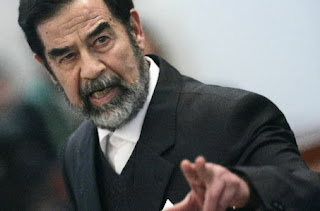 Saddam Hussein was basically a Manual Noriega with rabies on steroids, but we have to assume a lot of the horror stores we hear about him are simply political propaganda. No one is arguing that he was the product of a highly tribal society that favored violence and brutality, but we also have to consider that if most of what got us to invade and destroy Iraq were falsehoods, there were probably a few thrown in there about Saddam as well.

Come on, you can't tell me that everything about him is true when we know for a fact that he didn't have any WMD's and that was the justification in invading them. Besides, for all the "bad" he did - and of course he wasn't perfect - he also provided the Iraqi people with a standard of living and education not seen since in the Arab world. Saddam Hussein wanted to bring the Iraqi people into the forefront of the modern world, and like other heroes we worship (Stalin, Mao), he had to do a lot of it through brute force. At the end of the day, Iraq had the best educational system in the Middle East, the highest standards of medical care, the most egalitarian attitudes towards women, minorities, and class, and a great social welfare system.

While taking the time to do all this, he also presented the Arab world with a lovable father figure who didn't make you feel like a sorry piece of shit. For instance, when no one else helped the Palestinians, he did. Ask any Palestinian and they will sing his praises all day long. Besides the SCUDS in the 90's, he also provided the families of those who were killed by Israel with a nominal pension. Even the Iraqis miss him. He was also not afraid to stand up to anybody or anything, including the United States. This, like so many other Noriegas before him, was his ultimate downfall. Everyone had a job, everyone had an education, and everyone had enough to eat. It took a concentrated effort of over three decades of punitive sanctions and orchestrated total war to smash the iron spine of the Iraqi people.

Saddam was always cool and in control and kept his pride about him, which was where the United States tried to focus the majority of their firepower. Whether it was at his kangaroo-court or during a national address, Saddam made sure everyone knew he was in charge. Even standing on the gallows (or was it a body double, eh? We'll never know!), Saddam calmly chided his executioners for being cowards and apostates. 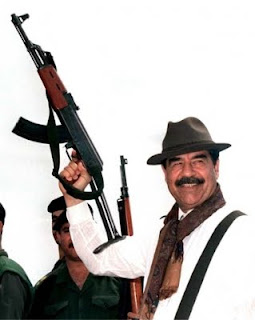 Anyway, the one thing I still have a ton of questions about is how much the C.I.A. had him under their thumb. After all, it's science fact that Saddam wasn't captured at the bottom of a hole and we have to assume by the length of his beard that the debrief was long and painful.

I remember watching an American documentary in early 2003 that ran through Saddam Hussen's life and, deciding that he was a diabolically evil compulsive liar, concluded that he must be hiding WMDs without any means of proof. Just because.

Saddam was basically the Tito of Iraq. Saddam basically united everyone under the Iraqi, I don't see why anyone would call him sectarian when all of the ethnic cleansing happened pretty clearly after he was deposed. It's only a question on how much he was or wasn't a puppet of foreign governments. 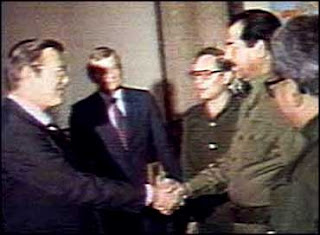 Even the kurds and shia' he "massacred" were bought and paid for by the United States and Britain. Arabs who aren't Khaleeji collaborators will pretty much unaimously agree these were "internal problems" (Mushekel dakhalive) And really, if killing Kurds is a good reason to get rid of a leader then why don't we invade Turkey or something.

Kurds are notorious trouble makers and will sell their own mother for a homeland. I'm just sayin', is all.