Wait 40 Years And The Terrorist Give Up

After 40 Years, We Throw Up The White Flag

Now I don't expect the terrorist to win all the time, but then again, one man's terrorist is another man's freedom fighter. So in that sense I have news to report that my DNA background, after 40 years of fighting, The ETA has decided to wave the white flag

It is not clear whether the ceasefire is permanent or temporary. Armed Basque separatist group Eta says it will not "carry out armed actions" in its campaign for independence.

In a video obtained exclusively by the BBC, the group said it took the decision several months ago "to put in motion a democratic process".

The Basque interior minister called the statement "insufficient". Madrid has previously insisted that Eta renounce violence and disarm before any talks.

Eta's violent campaign has led to more than 820 deaths over the past 40 years.

It has called two ceasefires in the past, but abandoned them both.

This latest announcement comes after the arrests of numerous Eta leaders and during an unprecedented period of debate within the Basque nationalist community over the future direction of policy, says the BBC's Clive Myrie in San Sebastian.

Eta has been coming under increasing pressure to lay down its weapons, our correspondent adds.

It is unclear whether Eta is declaring a permanent or temporary ceasefire.

In the video obtained by the BBC, three hooded Eta fighters are shown sitting behind a desk with the Eta flag pinned up behind them.

The figure in the middle reads out a prepared statement defending Eta's campaign of violence, but towards the end she says the group now wants to achieve its aims by peaceful, democratic means.

"Eta confirms its commitment to finding a democratic solution to the conflict," the statement says.

"In its commitment to a democratic process to decide freely and democratically our future, through dialogue and negotiations, Eta is prepared today as yesterday to agree to the minimum democratic conditions necessary to put in motion a democratic process, if the Spanish government is willing," it says

It adds that Eta "took the decision several months ago not to carry out armed actions".

The statement ends: "We call on all Basque citizens to continue in the struggle, each in their own field, with whatever degree of commitment they have, so that we can all cast down the wall of denial and make irreversible moves forward on the road to freedom."

Eta announces that it took the decision several months ago not to carry out armed actions.

Nationalist politicians in the Basque country welcomed the announcement and called on the Spanish government and the international community to respond positively.

The pro-Eta party Batasuna, which has been banned since 2003 on the grounds that it is Eta's political wing, is one of two Basque nationalist parties to have called on Eta to declare "an internationally verifiable ceasefire" days earlier.

"Any declaration that talks about the suspension of terrorist attacks - even if it is only temporary - should be considered as good news," he said.
Map of Spain showing Basque region

But he called Eta's declaration "ambiguous" and "absolutely insufficient", because it did not "take into account what the vast majority of Basque society demands and requires from Eta, which is that it definitively abandon terrorist activity".

The Spanish government, which has been studying Eta's statement but is yet to make an official response, has said in the past that it will only negotiate with Eta if it renounces violence and disarms.

The deputy editor of the Basque language newspaper, Gara, which follows the activities of Eta closely, said the Basque people had been hoping for this declaration.

"It will be a long way but it's something that can bring the peace and the justice to the Basque country," he said.

Barbara Duhrkop, a former Socialist MEP whose husband Enrique Casas was murdered by Eta in 1984, said the statement was a positive step but did not go far enough.

"It's still insufficient because they talk about ceasefire, democratic process, but there's nothing about laying down arms and permanence. So I would be very careful, very cautious to evaluate how much worth there is in this announcement," she said.

Founded in 1959, Eta has since then waged a bloody campaign for independence for the seven regions in northern Spain and south-west France that Basque separatists claim as their own.

How can you look at these fine gentlemen and think them anything more than liberators?

This is sort of a big news piece. I really don't expect them to keep to this promise much. Especially considering how many attacks of their have been stopped in progress just in the past couple years alone.

And.. it doesn't look like the government is taking it seriously either. Oh, you can't read that? Let me translate it for you.

One day following terrorist group ETA's announcement of a ceasefire, the Minister of Public Works and Vice-Secretary General of the PSOE José Blanco have spoken on behalf of the government. "There's nothing good about this message," he stated in an interview with Onda Cero.

"We have to completely dismantle this terrorist group," stated the minister, who has been the first member of the government to speak publically about ETA's anouncement, "the terrorist group ETA is greatly weakened and is looking for an opportunity. But there are no opportunities except for them to definitively abandon arms and violence; it's a lost opportunity." The minister has praised the joint work "being done across party lines" in order to combat ETA's terrorism. "This you can know for certain. These are very solid agreements, that get good results."

ETA stated in their address that they decided months ago "not to commit armed offensive actions," without specifying whether their stated ceasefire is permanent or temporary and without making reference to calls from the left abertzale [t: radical basque separatists] to adopt a permanent and verifiable international truce.

its no good to make the organization a nonviolent political force, must obliterate

Let's play devil's advocate though. The PSOE at least was willing to hold peace talks with ETA, but nope, that wasn't good enough for them back then. So yeah, it's pretty easy to see why they don't want any negotiations and don't have any reason to believe them.

I say whatever to them. You see, the ETA did a lot of good things. Yes, their actions can be considered terrorist by nature, but it's all for a good cause.

One of the, if not the greatest hits in terms of political assassinations has to be the ETA killing Franco's successor, Luis Carrero Blanco, in what can be considered a spectacular manner. If you don't believe me, than take a look at the following diagram 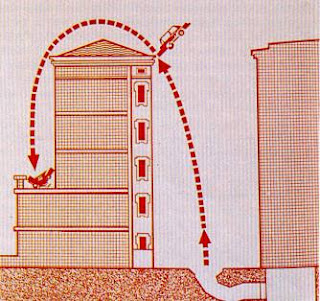 Yes, that's a diagram of a car being flung over a building by an explosive blast.

“The execution in itself had an order and some clear objectives. From the beginning of 1951 Carrero Blanco practically occupied the government headquarters in the regime. Carrero Blanco symbolized better than anyone else the figure of “pure Francoism” and without totally linking himself to any of the Francoist tendencies, he covertly attempted to push Opus Dei into power. A man without scruples conscientiously mounted his own State within the State: he created a network of informers within the Ministries, in the Army, in the Falange, and also in Opus Dei. His police managed to put themselves into all the Francoist apparatus. Thus he made himself the key element of the system and a fundamental piece of the oligarchy’s political game. On the other hand, he came to be irreplaceable for his experience and capacity to maneuver and because nobody managed as he did to maintain the internal equilibrium of Francoism”. 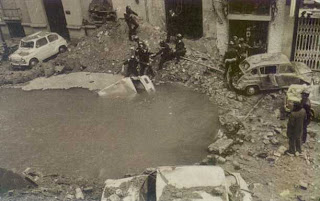 As you could see, the ETA used to be pretty hardcore during the early days of the civil war. Now a days they haven't done much. While it may be a matter of supporting a terrorist organization, they did kind of ensure Spain's democracy because Franco's plan was to have the true believer Blanco as his successor. Then when Blanco got killed, the only one left was the heir to the throne who Franco had known and taught since he was a kid. Juan Carlos had Franco convinced he'd continue Franco's vision of Spain. Then Franco died and the king took power and called a constitutional convention transitioning to socialist democracy.

You see this man? He's a good king. 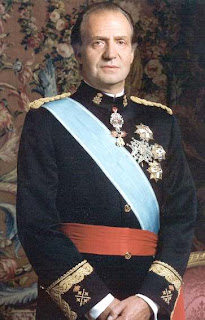 Then you add in that his son, the Prince who will probably take power soon, is a straight up communist.

I guess the solution to this is Basques invade Andorra and kill everyone there to establish their homeland. Of course there's the comical approach and wonder why the lizard bounty hunter guy from star wars hates Spain so much.

But then again, they're just going to pussy out once again. The problem with ETA is they're following the IRA's lead that certainly worked well for Irish independence, didn't it? Oh wait.. no, it didn't. Not like this is going to last anyway. It never does.
Posted by Booster Gold / Javier J. at 4:52 PM