Ha! Nah, just kidding. Please don't. That shit is just god awful. But even though I may say that you're better blowing your brains out than reading her god awful books, there's one captains of enterprise that would like to spread the good word with you and the rest of the world.. in the form of driving around this Capitalistic country of ours. 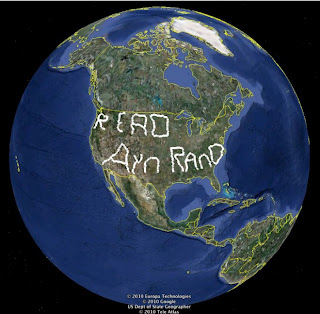 The idea was conceived and "written" by one person, Nick Newcomen, during the spring and summer of 2010. All expenses were paid entirely by him.

The first step involved identifying on a map the route he would need to drive in order to spell out "Read Ayn Rand." Then he drove the route. He used a GPS logger (Qstarz BT-Q1000X)3 to record his "writing." He turned on the device when he wanted to write and turned off the device between letters. He then input the recorded GPS data into Google Earth resulting in the image you see above.

For documentation, he video recorded himself at dozens of different landmarks along the route. In the image above, click on each letter in "Read Ayn Rand" to view this documentation.

So the dude went around the states and gps a lot of markers writing out, across this great nation of ours, that people should read Ayn Rand. I bet he listened to Atlas Shrugged on Audiobook during his spiritual journey all by his lonesome. Well, maybe just the final monologue, but he only got half way through it. I wonder how much he spent on gas to do that.

I wonder what this guy was thinking. "Hmmm, what would be the perfect medium to express my message of DOWN WITH BIG GOVERNMENT? Ah, I know, I'll extensively use the largest federally-funded public works project in all of history. He's using the tools of the oppressor against them. How clever. The whole map was created on public roads. What a fucking rebel.

The article also says that he traveled 12,328 miles. Guessing about 25mpg average, because of the mountains and the summer stretches in the desert, a lot of it wasn't interstate etc. So he probably went through 493 gallons. Rough guess of an average of $2.75 per gallon is $1,356 on gas alone. I glanced at one of my credit card offers the other day from Chevron or Exxon mobile or something and the interest on it was 25%. HA! Usury owns.

It's also probably at least 3-4 weeks of total driving minimum. I can drive all day, but a lot of people can't, so it may have been as much as 5 or 6 weeks, and again he wasn't spending it all at 85 in the Southwest interstate. Another $500-600+ on fast food. Another 100+ on oil changes. Between $2-3,000 on hotels unless he found some bargains or campsites or stayed at other "Ayn Rand enthusiasts" houses.

So all told, probably around $5,000 spend so he could get an article in a shitty blog saying he drove around the country to check his gps occasionally. Like it could have been done cheaper but probably not much so by someone that would actually do that kind of thing. Also, he's getting skin cancer from driving around in the desert that much.

I'm not even taking into account that this is America. So that probably meant he went all crazy on a credit card at 20% interest rate and he's going to be paying for it for decades and never understand why.

While I wish someone in Canada would get in a car and drive around to spell DON'T directly above it, but there's simply not enough roads to get that done with. I do think they're on the right path. 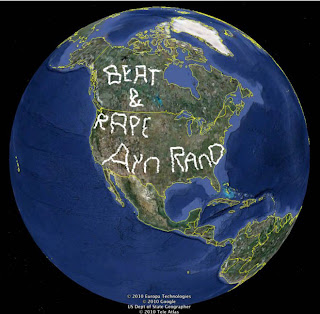 I begin my gps READ MARX European journey next month. It's sort of a wimp way to do it, though. If this guy wants people to take him seriously and read her dumb books, he should spell it out with a series of mail bombs like that kid who was trying to make a smiley face.

I was at the book store the other day and she featured pretty prominently on the summer reading table.

Let's boil it down once more. He drove 12,000 miles on public roads, tracked his progress with a system invented by government research, supported by satellites launched by NASA, and then uploaded the results onto a network created by the Department of Defense....

Now I'm not saying the free market WOULDN'T have come up with all these things eventually, but he would have had to pay to use them at every stage and had to crawl over the bodies of the dying poor to do it. Just soak it up, my friend. Enjoy the air in your hair and the asphalt under your tires.. no wait, that's not asphalt under your rubber, it's only shards of tyranny. Some people did volunteer work this summer. But this man just drove his AC-equipped car around like a jerk.

Then again, I have to blame myself a little here because I made his stupid endeavor a success by passing around this stupid story about what he did. Then again, this whole thing isn't that big of a deal compared to other very prominent Rand connections...

Greenspan contributed three chapters to Rand's 1966 book Capitalism: The Unknown Ideal, all of them reflecting her—and Greenspan's—ultra laissez-faire ideology. In one, Greenspan castigates antitrust law and practice as not merely harmful, but with the "hidden intent" of injuring the "productive and efficient members of our society." In another, he claims that all government regulation represented "force and fraud" as the means of consumer protection, whereas it is "profit-seeking which is the unexcelled protector of the consumer." He argues that the market system itself is a "superlatively moral system that the welfare statists propose to improve upon by means of preventive law, snooping bureaucrats, and the chronic goad of fear."

But again, it'd take me a long time to spell out "Read Hemingway" across the US of A.
Posted by Booster Gold / Javier J. at 4:25 PM