Striking Texas Tea In Your Home - Turning Plastic Into Oil

Striking Texas Tea In Your Home - Turning Plastic Into Oil

If you ever needed proof that capital will ultimately not let one single molecule of fossil fuel go unburnt, you have it here with this new* invention. But first let me say what this reminds me of.

Much like the Ouroboros, a mythical serpent who has its tail in its mouth and is forever eating itself, our fossil fuel dependence has caused us to go on a never ending cycle on this shit. For you see, we are turning plastic back into oil...

What the fuck is up with that guy's shirt? I mean, come on. What is with that?

We are all well aware of plastic’s “rap-sheet.” It has been found guilty on many counts, including the way its production and disposal raises resource issues and lets loose extremely negative environmental impacts.

Typically made from petroleum, it is estimated that 7% of the world’s annual oil production is used to produce and manufacture plastic. That is more than the oil consumed by the entire African continent.

Plastic’s carbon footprint includes landfilling and incineration, since sadly, its recycle rate is dismally low around the globe.

Plastic trash is also polluting our oceans and washing up on beaches around the world. Tons of plastic from the US and Japan are floating in the Pacific Ocean, killing mammals and birds. Perhaps this tragedy is best captured in the TED presentation by Capt. Charles Moore of the Algalita Marine Research Foundation.

Using less, or use it better?
Thankfully, there are those who fully appreciate that plastic has a higher energy value than anything else commonly found in the waste stream. A Japanese company called Blest created a small, very safe and easy to use machine that can convert several types of plastic back into oil.

Though Japan has much improved its “effective utilization” rate over the years to 72% in 2006, that leaves 28% of plastic to be buried in landfills or burned. According to Plastic Waste Management Institute data, “effective utilization” includes not just the 20% that is actually recycled, but also 52% that is being incinerated for “energy recovery” purposes, i.e., generating heat or electric power.

“If we burn the plastic, we generate toxins and a large amount of CO2. If we convert it into oil, we save CO2 and at the same time increase people’s awareness about the value of plastic garbage,” says Akinori Ito, CEO of Blest.
Blest’s conversion technology is very safe because it uses a temperature controlling electric heater rather than flame. The machines are able to process polyethylene, polystyrene and polypropylene (numbers 2-4) but not PET bottles (number 1). The result is a crude gas that can fuel things like generators or stoves and, when refined, can even be pumped into a car, a boat or motorbike. One kilogram of plastic produces almost one liter of oil. To convert that amount takes about 1 kilowatt of electricity, which is approximately ¥20 or 20 cents’ worth.
The company makes the machines in various sizes and has 60 in place at farms, fisheries and small factories in Japan and several abroad.

“To make a machine that anyone can use is my dream,” Ito says. “The home is the oil field of the future.”

Perhaps that statement is not as crazy as it sounds, since the makeup of Japanese household waste has been found to contain over 30 % plastic, most of it from packaging.

A mountain to climb down
The wonderful invention of plastics has spawned a huge problem that we are struggling to solve. With peak oil looming, things are set to change, but we find ourselves on top of an oil and plastic mountain, and the only way forward is down.
So while many solutions like this are not without hiccups or detractors, they are a step forward in coming to terms with our oil and plastics dependence and help raise awareness of the carbon footprint of its production and use. Somehow we all know that plastics is a habit we need to kick. But that doesn’t seem to make it any easier.

Perhaps the best thing you can do is to look more deeply into this issue. A good place to start is the 2008 Addicted to Plastic documentary from Cryptic Moth productions. You can watch the trailer online and maybe request it at your local video rental store.

According to the blurb, “the film details plastic’s path over the last 100 years and provides a wealth of expert interviews on practical and cutting edge solutions to recycling, toxicity and biodegradability.”
Next it is just a matter of taking action to break our love affair with plastic.

On the surface of this invention I suppose we should be optimistic about it, but when you boil it down, this guy invented a machine that essentially turns ice back into water.

I guess if you're not looking to save mankind it's cool. It's more to the point on making people actually give a shit about their plastic waste. Or it could just lead to giving the rich white people the ability to look even more smug drinking bottled water.

In all, it's pretty silly. If the home is the new oil field, it's because it's easy as hell to install solar-thermal power troughs on everyone's roof or adjoining land. But I guess an oil extracting plastic eating is better than using the landfills to put all your plastic waste.

I think the biggest problem I have with this is that it's for home use. I don't see why this couldn't be scaled up for industrial use. I'm an eco-nut, but the problem is business and industry, not your consumers. 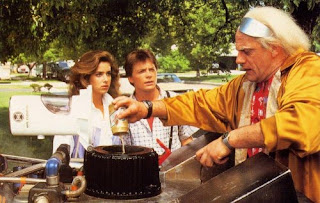 We need to target the companies packaging, not your trash can, and this is what people with money and influence are doing to solve the problem.... going after your trash can. Believe me, the homeless already take your used plastic bottles and other recyclable stuff out of your trash before the garbage man comes by.

"If we burn the plastics, we generate toxins and a large amount of CO2. If we convert it into oil, we save CO2 and at the same time increase people's awareness about the value of plastic bags."

I dunno, wouldn't you just end up bring the oil anyways? Plastics recycling needs to happen at the industrial source points and municipal endpoints, but it's needlessly expensive to do it in the middle. Besides that, hasn't the technology to turn plastic back into oil existed for some time now?

Does this company have the same owner as that Irish Perpetuum Mobile because when it's all said and done, all this is, is a never ending cycle of using the same shit over and over again when, instead, we should be weening ourselves off this addiction altogether.
Posted by Booster Gold / Javier J. at 4:48 PM