Tweens For The Gipper

Tweens For The Gipper

As if I didn't have enough reasons to hate Nick Jonas and Jordin Sparks comes this news that they're Tweens for the Gipper.

Jonas, 18, and Sparks, 21, are leading The National Youth Leadership Committee of the Ronald Reagan Centennial Celebration.

The team is comprised of 35 athletes, entertainers and student leaders under 25 who have been personally touched by the late actor-turned-politician's vision of freedom.

And the singers are looking forward to paying homage to the former world leader by leading their peers in the planning the event, which is scheduled to take place in America on 6 February.

The Jonas Brothers singer Nick calls Reagan as his "personal hero", while Sparks adds, "Ronald Reagan's optimism and graciousness is a model for me in my career. I'm honoured to be a part of this leadership committee and give back just a fraction of the blessings I've received."

Awful singers support awful president. News at 11. Ronald Reagan, soon to be the hero of tweens everywhere? It's all starting to make sense now.. Punkass kids with their punkass music.

I mean, it's really weird to celebrate the birthday of a dead person except our lord and savior Jesus Christ, who loves you all and expects his birthday cake in December. 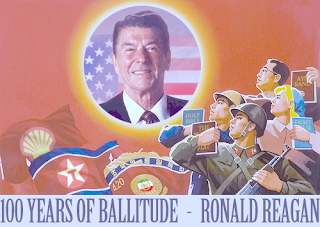 It's really too bad Ronald Reagan's birthday and death day are so close to established national holidays. I would fully anticipate it becoming a day off under the next republican administration. Maybe they'll just put him on a dime instead.

What is with this Reagan-worship youth cult that's starting up? Remember how everyone was all like baby boomers will die soon and the Reagan right with them and the country will shift left? Yeah, that's a wrong thing. Worst country.

There was never a more rotten, evil human being alive than Ronald Reagan. Not one. Not even Hitler. 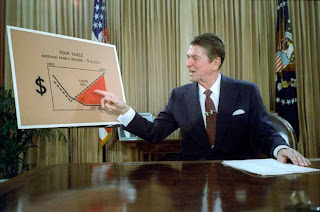 What the hell is with that chart. There's no X or Y axis. That chart lines up pretty closely with the inflation adjusted incomes of the top couple percent of earners and everyone else, directly a result of Ranold Reagan's policies.

I've always sort of wondered what he's saying in that image. I mean, what can you really say when you have such a stupid chart in front of you and is trying to justify it.

"As you can see here, their plan is to increase taxes each and every year in a geometric fashion"

I just don't get it. I feel like I should just go to his library and piss on his grave some more.
Posted by Booster Gold / Javier J. at 11:09 AM