Donate To Doctors Without Borders You Fuckers!

Donate To Doctors Without Borders You Fuckers!

Right now KCRW is doing their pledge drive. In that a public radio station begs people for money to stay afloat. I'm normally all for it. What with my unconditional love for NPR and all things monotone. No better way to fall asleep in the car, right? I kid. I kid. I love KCRW, have been a member for a while and you should really consider becoming a member if you have the pocket cash for it.

I'm no stranger to giving out free money. I do hype up Heifer International during Christmas where they'll give some family in Africa livestock. More importantly though, I do have one orginization that I think you should give money to right away. Doctors Without Borders. These people are real good and they do nice things:

Médecins Sans Frontières was created in 1971 by a small group of French doctors in the aftermath of the Biafra secession, who believed that all people have the right to medical care regardless of race, religion, creed or political affiliation, and that the needs of these people supersede respect for national borders... In 2007 over 26,000, mostly local, doctors, nurses, and other medical professionals, logistical experts, water and sanitation engineers and administrators provided medical aid in over 60 countries. Private donors provide about 80% of the organization's funding, while governmental and corporate donations provide the rest, giving MSF an annual budget of approximately USD 400 million.[4]

The organization actively provides health care and medical training to populations in more than 60 countries, and frequently insists on political responsibility in conflict zones such as Chechnya and Kosovo. Only once in its history, during the 1994 genocide in Rwanda, has the organisation called for military intervention. To be able to speak and act freely, MSF remains independent of any political, religious or economic powers. The majority of all MSF activities are paid for with private donations.

MSF received the 1999 Nobel Peace Prize in recognition of its members' continuous effort to provide medical care in acute crises, as well as raising international awareness of potential humanitarian disasters.[5] Dr. James Orbinski, who was the president of the organization at the time, accepted the prize on behalf of MSF. Prior to this, MSF also received the 1996 Seoul Peace Prize.[6] The current president of MSF is Dr. Christophe Fournier. 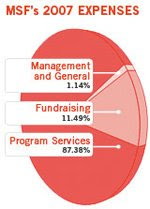 You don't have to worry that the money you donate will go to pay interns and secretaries and never actually reach any actual doctors or buy any supplies. So why not open up your wallet, if you can, I know times are tough and

And if you can't, don't worry. It doesn't mean you're a bad person or anything. Just remember when you do have some more expendable income, that this would be a good cause to donate to.