Girls Will Be Girls

Girls Will Be Girls

I often hear people talk about how much better things where "back in the day" and I have to wonder if they're not just looking at their memories with rose tinted glasses. I mean, let's face it. Back then if you were colored you would have your own water fountain and if you were a woman you would have to fight for your right not to be barefoot and pregnant. Can't say those days were all peachy like The Wonder Years make them out to be.

Even dating was strange back then. Going Steady was the big commitment and till then it was socially acceptable to date multiple boys at the same time. In today's modern standards you'd be considered a cheap slut if you did the same thing. The only catch is once you go "steady", you had to remain steady with that one boy. 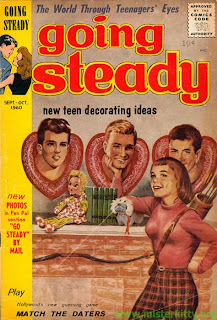 That sweater is painted on. What a tramp! Then again, that girl really likes to mount a lot of guys..... on her wall.

To all of you who feel the need to hearken back to those glory days of things that were better times... well, apparently all of you readers were previously unaware of the things that teenage girls in the 1960's did..... like douching with coca cola to prevent pregnancy. Girls have always had their fascinating mysteries.

Yes, that's right. They were douching with Coca Cola bottles. Back in the 1950s and 1960s, this method of parenthood prevention proved somewhat popular because not only was it cheap and universally available at a time when reliable birth control methods were hard to come by, but it also came in its own handy "shake and shoot" disposable applicator. After intercourse, the girl would uncap a warm Coke, put her thumb over the mouth of the bottle, shake up the beverage, then insert the neck of the bottle in her vagina and move her thumb out of the way. The warm well-shaken Coke became an effervescent spermicidal douche, with the traditional (at that time) six-ounce bottle providing what was deemed to be just the right amount for one application.

There's a good indicator of how far america has fallen in the past five decades: the traditional coke bottle used to be six ounces

And before you ask... or maybe you didn't, but I'll answer it for you. Yes it's true, Some of your moms and grandmas probably did that. Makes you question asking if grandma wants another coke during the next family barbecue, doesn't it? In fact if you have curly hair but your parents don't, it's probably because you came from carbonated sperm.

Goes to show you that even though you don't allow the children to take part of the grown up activities of abortions, they'll still find a creative way to do it. I just wonder how many children were born this way when the teenage soon-to-be-mother used Pepsi instead of Coke. I mean, it is the choice of the new generation, after all...

Ok, that was just in poor taste. It's not like today's youth are lining up and plugging up their girlfriends with compressed CO2 cylinders and throwing the valve wide open. So on that regard, the kids are a bit more alright. Unless you count all that myspacing and twitter...
Posted by Booster Gold / Javier J. at 4:54 PM