Did I do a Zombie piece for July? I really don't remember. I mean, I seem to always do them once a month but with the rush that was Comic con, I'm not even sure if I did. Well, if I didn't, this one will make up for it and then some. Get ready folks because the Walking Dead are coming to you through your television screen.

When I first heard that AMC was going to produce original television series I was a bit shocked. A little more shocked than I was hearing SciFi changing its name to SyFy and a whole lot more when I realized that Cartoon Network was showing live action stuff. In the time since they started producing their own shows I have eaten crow and loved it. 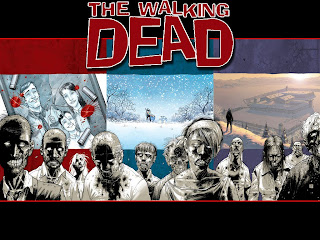 The original shows they have aired have been amazing. Mad Men is one of the best shows on televisions, even if you don't want to remember a time when women had no rights and you could market cancer sticks to the masses via a doctors recommendation. Breaking Bad has also been one show that, like the meth they have, once you try it, you'd stay hooked.

As well as creating a Prisoner miniseries that will air later this year, AMC has been completely on a roll So when I heard that The Walking Dead is coming to AMC as a television series. I was floored!

AMC is venturing into zombie-drama territory with multi-hyphenate Frank Darabont.

Cabler is close to finalizing one of the richest development deals ever with Darabont to write and direct a series adaptation of the Image Comics graphic novel series "The Walking Dead," penned by Robert Kirkman. Gale Anne Hurd of Valhalla Motion Pictures and David Alpert of Circle of Confusion are also on board to exec produce.

Project is set among a group of zombie survivors of an apocalypse who are led by a police officer, Rick Grimes, in search of a safe place to live. Numerous editions of the "Walking Dead" graphic novels have been published since 2003.

Joel Stillerman, AMC's senior veep of programming, production and original content, said the project appealed to the cabler because of "the quality of the storytelling" in Kirkman's work. The series will stay faithful to the tone of the original novels, he said.

"This is not about zombies popping out of closets," Stillerman said. "This is a story about survival, and the dynamics of what happens when a group is forced to survive under these circumstances. The world (in 'Walking Dead') is portrayed in a smart, sophisticated way."

Darabont and Hurd pitched the project to AMC and several other outlets. There is no studio attached yet. The duo's involvement made the project a must-have for the cabler, Stillerman said.

"These are two world-class filmmakers who are also brilliant storytellers with experience in the fantasy genre," he said.

While this is me posting what some would consider me re-writing an AP piece, I'm going to go above and beyond on this. The Walking Dead is one of the best comic book series I have read and followed monthly. I picked up issue one when it came out on the shelf because it was zombie themed and the last time I checked to see the value of the book, it was ranging in the $150 area for a single issue. 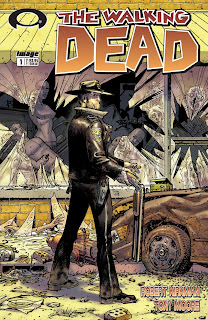 Especially surprising considering the comic book market in terms of value placed on books, the first issue of The Walking Dead was printed in October of 2003. The debut issue sold a little more than 7,000 copies and was right behind the sales numbers for Sonic The Hedgehog and Powerpuff Girls. It wasn't a big seller and at the time, Kirkman didn't have much of a name for himself as Invincible was just starting out as well. In 2008 and 50 issues later, the sales of The Walking Dead are well into their 20,000's and the trade paperbacks are extremely great sellers.

So why is this news especially good to hear? Beyond a good source material getting the television treatment, Darabont and Hurd are big names and with AMC putting out some of the better shows on TV now, how could not see a lot of promise in this. Even if people are going to jump towards a view that "This should be an HBO series" because of the graphic violence that must be involved with a zombie film. 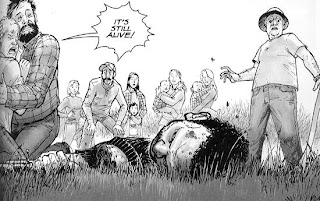 And to those worried that this wont be as good because it's not on HBO, a place were redneck vampires run around and have sex, I can only point you to Breaking Bad. A show about amateur meth cookers that don't know how to do much else, that show does not pull any punches. With the right hands and a proper cast, I can see this turning out amazingly well.

When I read that Frank Darabont was on it, all my concerns floated away. He's the writer of the screenplay to Shawshank Redemption. Darabont will more than likely bring in Rohn Schmidt as his DP because they have a long history together. This should also make you happy as Rohn Schmidt contributed to the photography of The Shield. When Darabont went on to do The Mist, he made a point of hiring Schmidt as his DP and brought in the Shield's camera crew because the idea of a Stephen King horror movie shot like an episode of The Shield gave him something to shoot for. Now that he's doing a TV project, I would not be surprised to see him bring Schmidt along. 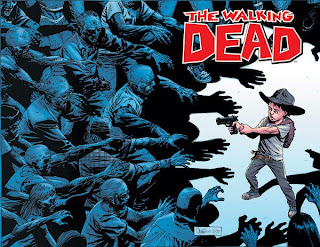 But back to the source material. If you aren't a reader, the perhaps you would be interested in reading the first issue, it's online for you to enjoy free of charge.. But be warned, once you read the first one, you might as well be considered infected, you will want to read more and more of this.

The only concern here is that they'll improve on Kirkman's work, because really, Kirkman does a lot of build up for events that he writes completely off in some manner or other. It's great for realism. In life you're not automatically going find out the why of everything, but it can get frustrating in a book. They hinted at Rick's wife sleeping with his best friend and the potential of him being the father was planted early on.. Only to have that story come to a resolution that seemed more like an attempt to wipe that whole issue out the window. 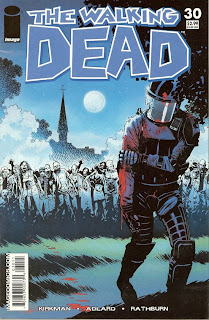 I do like the idea of the show that it's going to take a serious look, in a long version, at what will happen if the "shit goes down". We haven't had many Zombie/Survival stories lately and to be honest, those never get old and are always prime material for long-form treatments to be made of them. It's bad enough that DAY ONE doesn't seem like it will last long on NBC's line up, so a post-apocalyptic survivor stories don't get much love. I mean, look at Jericho.

While a lot of people are going to go crazy about the zombies in this show, the real beef of this book comes from the human interactions and how it all breaks down when such a bleak future is presented to you. Now here we are 64 issues later and the cast has changed and the story arcs have ranged from sometimes being way too wordy without a single zombie for many issues, to having a horde of zombies try attacking them. 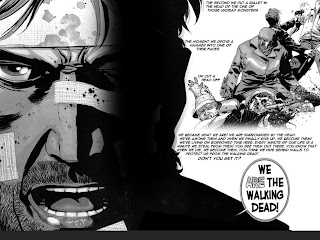 This, by all means, is a character driven comic book. Hell, the status quo changes often and while I've, on more than one instance, has cursed Kirkman and said I wouldn't read another issue, I still pick it up monthly. I'm really excited to see how this pans out. Hell, maybe even try to jump in on that if I can. I suppose the best way to describe it to others is that while this is a comic about zombies, the main characters are the ones classified as the Walking Dead.

It's only a matter of time before Kirkman decides to kill them off. Way to have good taste, AMC.
Posted by Booster Gold / Javier J. at 6:05 AM