Come On, China's Just Fucking With Us Now...

Come On, China's Just Fucking With Us Now...

That has to be the only logical reasoning behind the following satellite photos looking down on China. 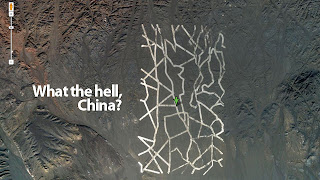 Not seeing it? Well, let's let Gizmodo explain it to you.

Why Is China Building These Gigantic Structures In the Middle of the Desert? (Update 2)

This is crazy. New photos have appeared in Google Maps showing unidentified titanic structures in the middle of the Chinese desert. The first one is an intricate network of what appears to be huge metallic stripes. Is this a military experiment? 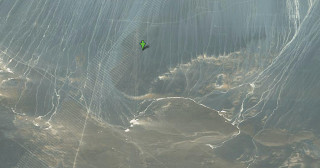 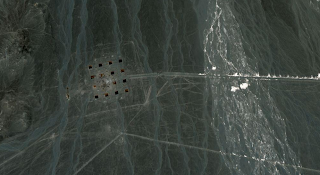 They seem to be wide lines drawn with some white material. Or maybe the dust have been dug by machinery.

It's located in Dunhuang, Jiuquan, Gansu, north of the Shule River, which crosses the Tibetan Plateau to the west into the Kumtag Desert. It covers an area approximately one mile long by more than 3,000 feet wide.

The tracks are perfectly executed, and they seem to be designed to be seen from orbit. 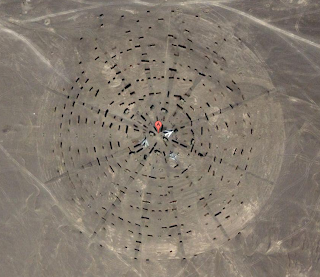 Perhaps it's some kind of targeting or calibrating grid for Chinese spy satellites? Maybe it's a QR code for aliens? Nobody really knows.
You can check it out yourself in Google Maps here. 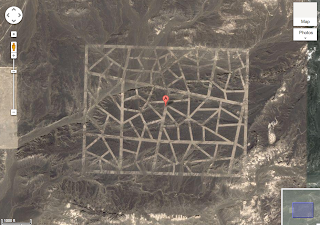 Boy, driver education courses in China are pretty hardcore. Imagine that DMV. "Sure, we could use your old picture, that's perfectly fine, but the drivers test to re-certify is only given on the outskirts of urumqi. Schedule at the next desk. Thank you."

If anything, it looks like a military training ground and nothing more, really. You see that sort of thing in our own country a lot. Ever drive down from L.A. to San Diego? You'll notice a lot of that shit all around you. Vast fields of nothing but some made up little Afghan city that looks like the backlot of a Hollywood studio. 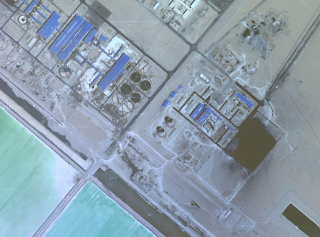 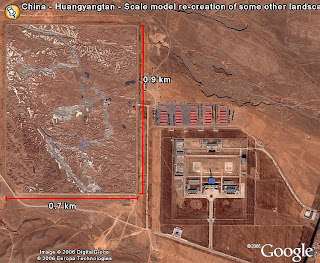 In all seriousness, it turns out that they're just huge targets for spy satellite calibration

Newfound Google Maps images have revealed an array of mysterious structures and patterns etched into the surface of China's Gobi Desert. The media — from mainstream to fringe — has wildly speculated that they might be Chinese weapons-testing sites, satellite calibration targets, street maps of Washington, D.C., and New York City, or even messages to (or from) aliens.

It turns out that they are almost definitely used to calibrate China's spy satellites. 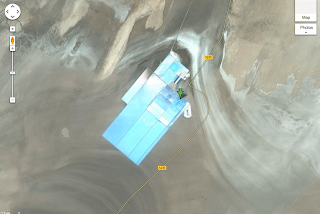 But more to the point, if I knew that the American spy satellites were looking down on me 24/7, I would just build all kinds of weird shit just to fuck with them. It's the same as with my home. That's why my house has been reshaped to look like one of those decals of Calvin urinating with a devious grin on his face. 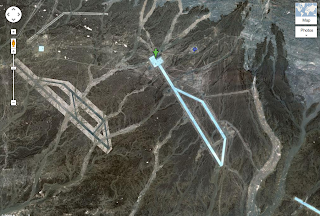 I encourage everyone to paint a picture of Goat.se on their roof. It'll be a sort of... diddler on the roof, if you will. I mean, that's what the rich pranksters are doing anyway..

Rory McInnes, 18, climbed on to the flat roof of his parents' home and daubed the symbol using a tin of white paint, after watching a programme about Google Earth.

Web surfers can view detailed images from satellites using the Google software, enabling them to zoom in on their homes to see them from above.

But parents Andy and Clare did not discover their son's rude artwork until a helicopter spotted it on top of their home near Hungerford, Berks.

The pilot called The Sun newspaper, which then contacted Mr McInnes to tell him.

Mr McInnes, 54, a company director, thought the newspaper was having a joke.

However, when he asked each of his four children if there was indeed the image of a phallus on their newly-completed roof, Rory owned up.

When Mr McInnes phoned his son, who is currently in Brazil on a gap year, the teenager said: "Oh, you've found it then!"

So the moral of the story is... well, there is none. Just go up to your roof and draw body parts. Lots of them. You should probably fuck on top of there as well. You don't know how kinky that shit is and the U.S. Government, or at the very least a nicely celebrated Chinese spy satellite may be watching. Give them a good show. 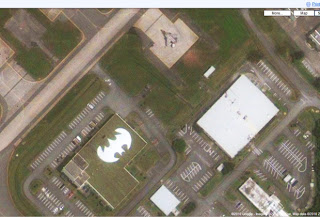