It's Christmas and since I'm probably horribly depressed... (or maybe I'm just eating some Chinese food with my fellow Jews), I figured I would take some time to toss out plenty of reasons why you should feel very lucky to have what you have on this day and not bitch about a lack of PS3 or Xbox games you wish you did have.

But in the event that you're a bit of a snot noised brat, here's a helpful visual that shows you exactly why you should be thankful. They're a good graph showing you exactly who is the Tiny Tim's of the U.S.

Last month, the Census Bureau released what is arguably one of the most alarming statistics of the year: In 2009, the number of Americans living in poverty reached its highest level in 51 years. The poverty rate was 14.3%, up from 13.2% in 2008, much – if not all – of that increase attributed to the recession.

So where are America’s poor? In this interactive infographic, we take a regional look at poverty. Roll over each state to see its poverty rate, along with those for children ages five through 17 and for children under the age of five. 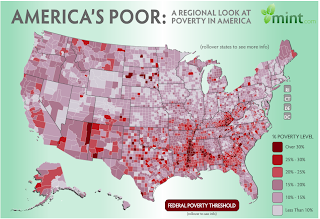 Would you look at that belt of poverty in the south right there. That sure is something alright. Also, the dark spots in Wisconsin and the Dakotas are all right on reservations. So, you know, take that for what it is. 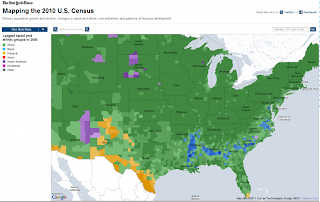 Sort of crazy when you think about it the level of poverty that is going on. If those graphs didn't depress you enough, try clicking the site for a ROLLOVER ACTION of all the hard hitting stats on how the break down of poor is even better (or should I say far more depressing) 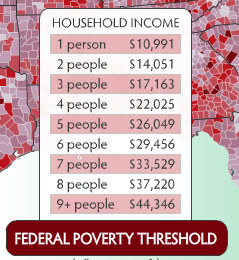 In those areas around 32% of children 5 and younger live in poverty in Mississippi. 25% from ages 5-17 live in poverty. And yet we call ourselves the richest country in the world. Crazy world we live in.

I was sitting here looking at that and wondering why the percentage of people under poverty level wasn't higher and then i remembered that even "only" 20% is one in five. My local boys and girls club volunteer base is a weird mix of professional older white men and young native/black mothers, it's fun to go to events just to see the two groups together.

On an unrelated note, why are there no squiggly lines or circle districts? Come on, map makers, spice up county lines a little.

But back to poverty; There's plenty of reasons not to ever read the comments section of anything, but here's just another

Just try to manage money from a 6 dollar an hour job. I dare you.

I really want to make an effort post in the coming year about the horrible shit we handle regarding how backwards this country is towards child welfare and juvenile justice and my frustrations in talking with politicians and policy makers.

Reminder; The coal miners of Appalachia wages one of the largest battles of the class warfare against the American capitalist system with a 5 day standoff against the US military. And they are now paying for it with systemic poverty and no one gives a shit. How bad was it?

Private planes were hired to drop homemade bombs on the miners. A combination of gas and explosive bombs left over from the fighting in World War I were dropped in several locations near the towns of Jeffery, Sharples and Blair. At least one did not explode and was recovered by the miners; it was used months later to great effect during treason and murder trials following the battle. On orders from the famous General Billy Mitchell, Army bombers from Maryland were also used for aerial surveillance, a rare example of air power being used by the federal government against US citizens.

It's remarkable how America is considered the richest country on earth because, like, 20 people have all the money ever and just so happen to live here when they're not chilling in their beach house in some other country.

And by remarkable I mean horrifying and we should kill them immediately.

No wait. I shouldn't say that, it is after all Christmas. And when you think about it, the poverty rate in the south (mainly black communities) really shouldn't be surprising to anyone though and we should all go back to just mindlessly being numb to the social inequality that every has towards one another.