For all of you watching Homeland on Showtime and thinking that we couldn't possibly treat a returning hero and prisoner of war in such a way that they would turn terrorist, right? Well, that's up for debate. Namely because of the following story.

So you've probably seen this picture before 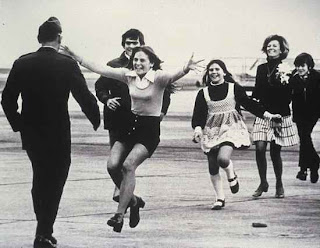 It's a returning soldier who was a P.O.W. and there's a very strange story behind it:

Lt. Colonel Robert L. Stirm was one of the 591 American prisoners of war who were returned during Operation Homecoming, in 1973. This famous Pulitzer Prize-winning shot was taken by Sal Veder, and is known as “Burst of Joy”. It came to symbolize the end of the United States involvement in the Vietnam. The photo shows Stirm’s teen-aged daughter sprinting toward him with her arms out, followed by his other children and his wife. Despite the photos happy appearance, it was just three days before the picture was taken that an Air Force chaplain handed the Lt. Colonel a letter from his wife of 18 years, stating that she had fallen in love with another man during his five-and-a-half years in imprisonment. The next year, the Stirms divorced and his wife remarried. The judge awarded his wife custody of 2 of his younger children, plus the Stirms’ $24,000 suburban home and their car. Stirm was also to pay $300 a month child support. He was also ordered to pay over 40% of whatever pension he would eventually receive. The court denied his wife a share of his POW allotment and refused any alimony claim. However, it ruled nothing could be done about the $136,000 she’d already received.

Interesting Fact: All of the family members depicted in this picture received copies of the photo after it was announced as the winner of the Pulitzer Prize. His children are now grown and have families of their own, and each one has a framed copy of “Burst of Joy” hanging in their homes, except Stirm, who says he cannot bear to look at it. Stirm became a colonel and retired from the Air Force at age 72.

Yikes. I know it's not directly related to the show, but it reminded me of Brody and his wife and I thought it was interesting (if not depressing), so there you go. So with all that in mind, I'm not saying I agree with Brody on the show in turning to terrorism.... but I understand.
Posted by Booster Gold / Javier J. at 7:25 PM