I can't believe I'm actually going to be doing this. I mean, seriously, this is just odd but it seems that every so often the enemy of my enemy becomes my friend for an unholy alliance. It's as if G.I.Joe and Cobra joined up to fight an even bigger threat.

Anyway, I'm really floored by this facebook update/image. I mean, of all the reasons to criticize Sarah Palin.. this has got to be the worst one. 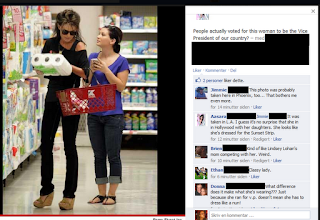 Can I ask what exactly is the big deal here? I guess it's that Sarah Palin is dressed wrong for an errand run, apparently. I mean, this is really stupid, but sure enough the inane comments keep rolling in... 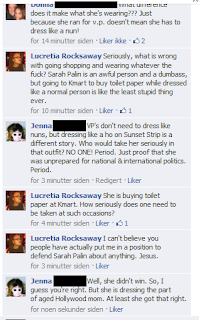 Yes, that's right, ladies and males. It's the patriarchy hard at work. I guess it wouldn't be so blatant if it wasn't for the fact that you can so clearly picture the way that'd gone if she'd been dressed "frumpy" What also gets me is that they're comparing her to a prostitute for wearing an outfit that covers 85% of her skin. Which is especially ironic given the fact that it's almost time for Halloween and your average female will be wearing something like "Sexy" Bert or "Sexy" Ernie as a costume with their cleavage hanging out.

Yes, sadly those two costumes are actually a thing. Horrific, I know. And while I may not have been very kind about Sarah Palin in the past, it was never because of what she wore. There's plenty of reasons to dislike this lady. For one thing, coming to California and telling us that if only we "drill, baby, drill" in Alaska, we wouldn't have such an oil crisis where we're paying over $4 per gallon at the pump.

But to mock her because she's dressed, in my opinion, far better than what I have seen at your average SoCal grocery stores is rather silly. I mean, it's a whole lot better than wearing your PJ's. You know. And I have seen far too many people in this area go shopping like that.

My god, folks. Stop making me side with people I once called out for their stupidity. This whole defending Sarah is making my head hurt.