Well, you know. I guess I couldn't leave well enough alone considering that we're here on another Saturday and there is just no Doctor Who on. I guess let's retouch the departure of the Williams. You know, now that I'm sure everyone has seen it by now.

Let's go back to Rory and Amy and how they ended... Rory died and Amy lived on after him for a good six years without her family and friends, never being able to have another child, the Doctor being unable to visit her without risking New York's safety... and really, who gives a shit about New York, anyway?

In the grand scheme of things, they had a daughter that they couldn't raise and resulted in them being unable to have any other children and were transported to a generally awful time to be, isolated from the lives and loved ones they left behind. In the grand scheme of things, the more I think about it, the more Rory and Amy's fate seems just plain awful. 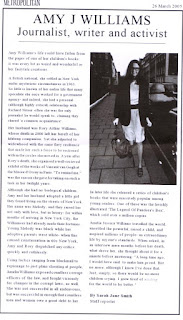 Rose? Here's your mom your dad and a Blow-Up Doctor.
Martha? You're in UNIT now! Congrats!
Donna? You forgot your adventures with the Doctor, but at least you get a husband, a caring father and a winning lottery ticket.
Amy and Rory? ... Well, you've got each other.

They didn't even get to say goodbye to Brian. That's the harsh truth of the matter. Though I guess Amy and Rory both have magical cellular phones that work across space and time. So maybe they could just call Brian anytime they want and talk to him. Though, they'll have to find an adapter that will let them charge their phones in 1938.... 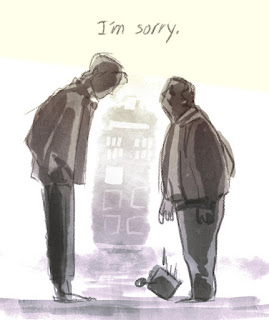 It's also too bad that Rory left his charger in Henry the VIII's bedroom.... And that, my friends, is how you wrap everything up in a nice little bow.

When you think about it, there's a pretty extensive history with the Doctor stealing away companions and difficult things happening and leaving behind some sort of father-figure to deal with the aftermath. What I'm getting at is that there needs to be a special with The Doctor, Brian and Wilf
Posted by Booster Gold / Javier J. at 4:18 AM