So it's Wednesday which typically means that new comic books roll out on the shelves of America. This week in particular let's talk about some comic book flick stuff. Namely the released trailer for Iron Man 3.

Okay, I guess we should first address that there was actually a trailer for the trailer;


Then on Tuesday the full trailer was released. I have to say, it's really something else.


Okay, I'm a little bummed that they went with Iron Patriot's reactor as being a painted star shaped above the core reactor opposed to just making the core reactor fully be a star. And the Mandarin... I'm a little surprised they went for the full on Rasputin look for him. I fully expected him to just a in a suit like the comics version wears now in IIM 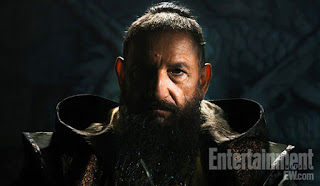 I'm also... well, I have no idea what accent he's doing. I guess that with the Avengers and Thor, they opened up the world enough for Hem to go full comic book in terms of designs. I can only hope that this leads to a potential MODOK. Come on, Marvel, it needs to happen.


Still, that accent. I guess he's doing an over the top accent, which is generally what you expect Kingsley to do in any film. It will be interesting to see if Iron Man 3 decides to actually follow up with what it puts out in the trailer, mainly Stark and America trying to deal with a terrorist attacks. But who knows. The New York incident may refer to the stuff that happened in Avengers. Or maybe Iron Patriot is being manipulated by Mandarin

Either way, it'll be another good year for Marvel Comics. Man, DC really needs to get on the ball and try to catch up.
Posted by Booster Gold / Javier J. at 3:00 PM